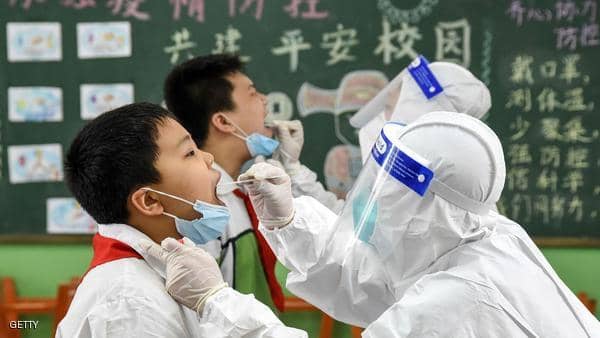 Shafaq News/ Beijing has claimed that coronavirus may have spawned outside China and travelled to a wet market in Wuhan via frozen food exports from countries including Australia.

An article in the government-controlled Global Times newspaper on Sunday said the idea the virus was imported into the Huanan wet market last year 'cannot be ruled out' - although it admitted there is no supporting evidence.

Beijing has been pushing the theory since October when experts tracing an outbreak in Qingdao city found living coronavirus samples on packets of imported frozen cod.

Coronavirus cases were first reported in the Chinese city in December last year before the disease spread rapidly around the world, causing 1.5million deaths and wrecking economies.

The Global Times report comes amid escalating political and economic tension between Australia and China after Beijing slapped a 212 per cent tariff on Aussie wine and shared doctored propaganda images referencing war crimes allegations against Australian troops in Afghanistan.

In a separate article on Sunday, the same newspaper claimed Australia - a close US ally - has been 'the pawn in the US regional strategy in the recent years' and pictured a cartoon of a kangaroo projecting the shadow of an eagle, the national emblem of America.

Attempting to cast doubt on the idea that Covid-19 originated in Wuhan, The Global Times said cold-chain products were imported into the city from several countries including 'meat products from Brazil and Germany... Australian steak, Chilean cherries and Ecuadorian seafood.'

The Chinese Center for Disease Control and Prevention said in October that lab tests confirmed Covid-19 could survive for a long time on frozen food packaging.

The article also listed customs data which showed that Hubei, the province that contains Wuhan, had a 174 per cent increase in frozen product imports in 2019 compared with the previous year.

Latest on the worldwide spread of Coronavirus