Shafaq News / The spokesman of Kurdistan Regional Government  (KRG) denied on Wednesday, the validity of the allegations of a website it described as "miserable" regarding the request of the region's head of government, Masrour Barzani from the region's president, Nechirvan Barzani to be informed of oil contracts and their revenues.

A statement by the regional government spokesman, Jutiar Adel received  by Shafaq News said that , "A local website published a topic in which it claimed that the Prime Minister of KRG, Masrour Barzani asked the region's president, Nechirvan Barzani to brief him on the content of oil contracts concluded with oil companies and their revenues.

Adel stressed that "this news has no basis and is far from truth," noting that it is part of the continuous misinformation that this "bankrupt" site practices, as he put it. 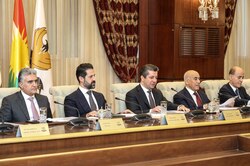