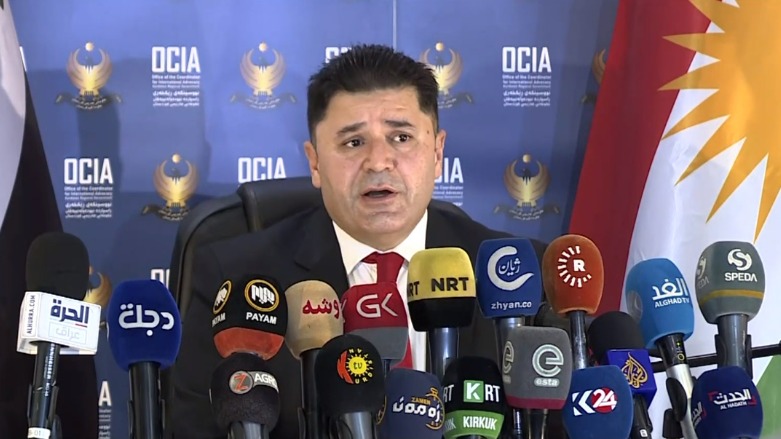 The governor of Kirkuk, Rakan al-Jubouri, accused, in an interview with an Iraqi channel, the security forces in Kurdistan of abducting citizens from Kirkuk and detaining them over charges of terrorism.

Zebari said in a press release today, Wednesday, "those statements lack credibility," hinting at the massive displacement flux into the region when ISIS took control over those areas.

"KRG had a hard time, on all the levels, trying to contain this load of forcibly displaced persons. It had to impose tight measures to maintain security and stability in the region and protect all the citizens without discrimination."

"The majority of the displaced people approached the Peshmerga berms. This placed burdens on the Peshmerga forces to transfer them to the camps set up to receive them. It was not unlikely that some terrorist groups infiltrated the region between the crowd."

"After liberating the areas, and during the battles, some people were arrested for suspicions of affiliation to ISIS. Those who were proven innocent were released, while those who had ties with the terrorist organization were subjected to the legal procedures in force."

"ISIS detainees in the region’s prisons are either 'convicts' or 'indictees', and they participated in terrorist acts. KRG expressed willingness to cooperate with the Federal government, organizations, and international parties to follow up on the situation."

"After the Peshmerga and the Coalition forces started pursuing ISIS terrorists in Kirkuk, a group of the arrestees was transferred to Erbil to avoid crowding. They were transferred back to Kirkuk later for trial. According to law, an indictee cannot be prosecuted in the court of a governorate other than where he committed the crime unless he was also wanted in other governorates."

" KRG provided many facilities for detainees' extradition. This cooperation with the Federal Ministry of Interior helped handing many ISIS detainees to the specialized courts and other departments in the Federal government."

Kurdistan government is mortgaging its budget with a matter