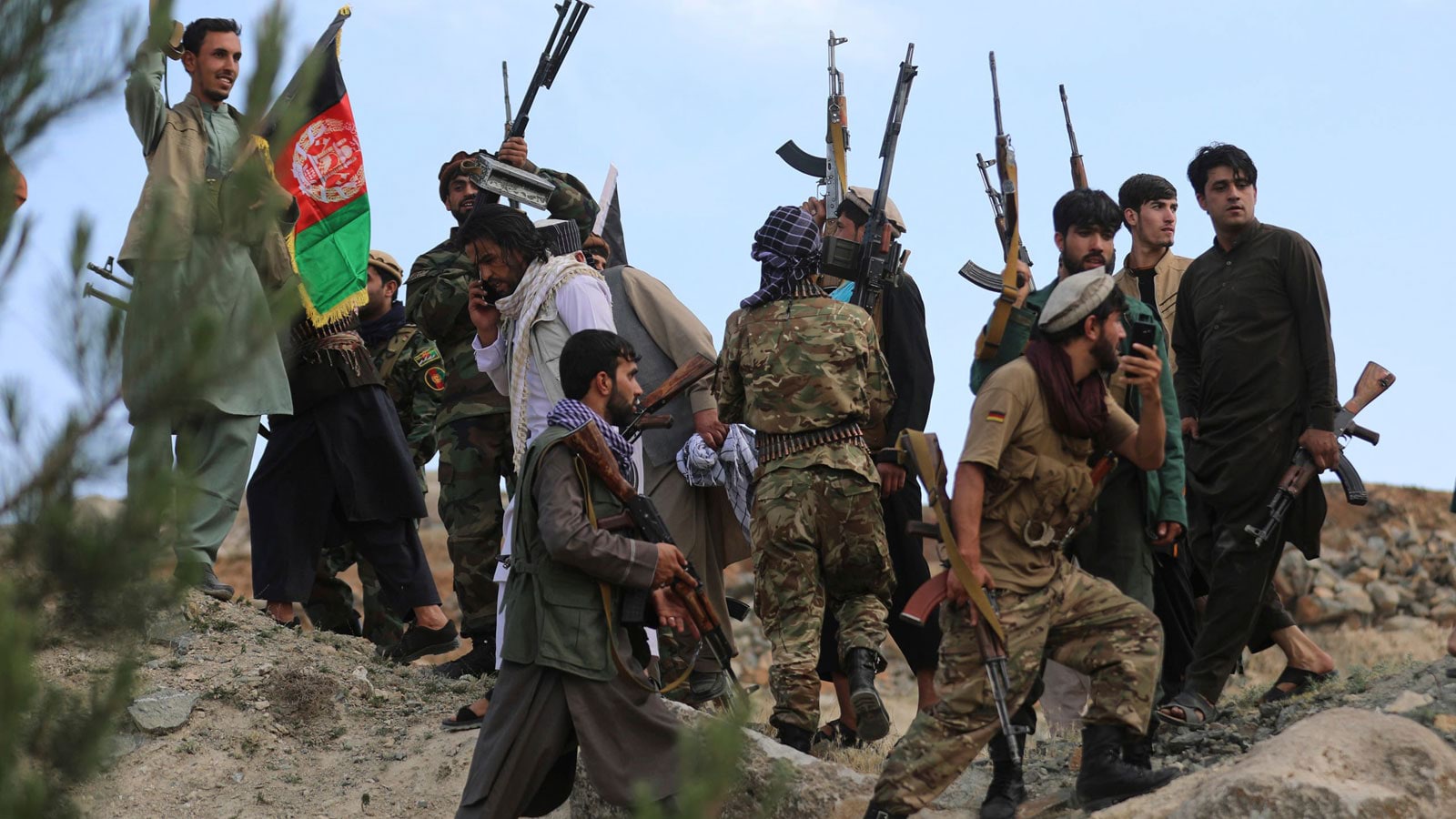 The insurgents have captured much of northern, western and southern Afghanistan in a breakneck offensive less than three weeks before the United States is set to withdraw its last troops, raising fears of a full militant takeover or another Afghan civil war.

The Taliban captured all of Logar province, just south of the capital, Kabul, and detained local officials, said Hoda Ahmadi, a lawmaker from the province. She said the Taliban have reached the Char Asyab district, just 11 kilometres south of Kabul.

The Taliban also attacked the northern city of Mazar-e-Sharif from several directions, setting off heavy fighting on its outskirts, according to Munir Ahmad Farhad, a spokesperson for the provincial governor.

The Taliban have made major advances in recent days, including capturing Herat and Kandahar, the country's second- and third-largest cities.

Afghan President Ashraf Ghani delivered a televised speech on Saturday, his first public appearance since the recent Taliban gains, in which he vowed not to give up the "achievements" of the 20 years since the United States toppled the Taliban following the 9/11 attacks.

The U.S. has continued holding peace talks between the government and the Taliban in Qatar this week, and the international community has warned that a Taliban government brought about by force will not be accepted. But the insurgents would appear to have little interest in making concessions as they rack up victories on the battlefield.

"We have started consultations, inside the government with elders and political leaders, representatives of different levels of the community, as well as our international allies," Ghani said. "Soon the results will be shared with you," he added, without elaborating further.

The president had flown to Mazar-e-Sharif on Wednesday to rally the city's defences, meeting with several militia commanders, including Abdul Rashid Dostum and Ata Mohammad Noor, who command thousands of fighters.

They remain allied with the government, but during previous rounds of fighting in Afghanistan, warlords have been known to switch sides for their own survival. Ismail Khan, a powerful former warlord who had tried to defend Herat, was captured by the Taliban when the insurgents seized the western city after two weeks of heavy fighting.

Residents of Mazar-e-Sharif expressed fear about the security breakdown.

"The situation is dangerous outside of the city and inside the city," Mohibullah Khan said, adding that many residents are also struggling economically.

The withdrawal of foreign forces and the swift retreat of Afghanistan's own troops — despite hundreds of billions of dollars in U.S. aid over the years — have raised fears the Taliban could return to power or the country could be shattered by factional fighting, as it was after the Soviet withdrawal in 1989.

The first Marines from a contingent of 3,000 arrived on Friday to help partially evacuate the U.S. Embassy. The rest are set to arrive by Sunday, and their deployment has raised questions about whether the Biden administration will meet its Aug. 31 withdrawal deadline.

The U.S. Air Force has carried out several airstrikes to aid its Afghan allies on the ground, but they appear to have done little to stem the Taliban's advance. A B-52 bomber and other warplanes traversed the country's airspace on Saturday, flight-tracking data showed.

The Taliban, meanwhile, released a video announcing the takeover of the main radio station in the southern city of Kandahar, which fell to the insurgents earlier this week, renaming it the Voice of Shariah, or Islamic law.

In the video, an unnamed insurgent said all employees were present and would broadcast news, political analysis and recitations of the Qur'an, the Islamic holy book. It appears the station will no longer play music.

It was not clear if the Taliban had purged the previous employees or allowed them to return to work.

The Taliban have used mobile radio stations over the years but have not operated a station inside a major city since they ruled the country from 1996-2001. At that time, they also ran a station called Voice of Shariah out of Kandahar, the birthplace of the militant group. Music was banned.

The U.S. invaded shortly after the 9/11 attacks, which al-Qaeda planned and carried out while being sheltered by the Taliban. After rapidly ousting the Taliban, the U.S. shifted toward nation-building, hoping to create a modern Afghan state after decades of war and unrest.

Earlier this year, U.S. President Joe Biden announced a timeline for the withdrawal of all U.S. troops by the end of August, pledging to end America's longest war. His predecessor, Donald Trump, had reached an agreement with the Taliban to pave the way for a U.S. pullout.

Biden's announcement set the latest offensive in motion. The Taliban, who have long controlled large parts of the Afghan countryside, moved quickly to seize provincial capitals, border crossings and other key infrastructure.

Tens of thousands of Afghans have fled their homes, with many fearing a return to the Taliban's oppressive rule. The group had previously governed Afghanistan under a harsh version of Islamic law in which women were largely confined to their homes.

Biden says US recognition of Taliban ‘long way off’

The Taliban now control half of Afghanistan's provincial capitals