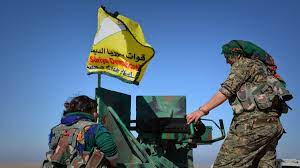 Shafaq News/ The commander of the main U.S.-backed Kurdish-led force in Syria said Saturday they have halted operations against the Islamic State group due to Turkish attacks on northern Syria over the past week.

Mazloum Abdi of the Syrian Democratic Forces told reporters that after nearly a week of Turkish airstrikes on northern Syria, Ankara is now preparing for a ground offensive. He said Turkey-backed opposition fighters are getting ready to take part in the operations.

Abdi added that Turkish strikes over the past week have caused severe damage to the region’s infrastructure.

Abdi said Turkey is taking advantage of the deadly Nov. 13 bombing in Istanbul that Ankara blames on Kurdish groups. Kurdish organizations have denied any involvement in the Istanbul attack that killed six and wounded dozens.

Over the past week, Turkey launched a wave of airstrikes on suspected Kurdish rebels hiding in neighboring Syria and Iraq in retaliation for the Istanbul attack.

His comments came hours after the U.S. military said two rockets targeted U.S.-led coalition forces at bases in the northeastern Syrian town of Shaddadeh resulting in no “injuries or damage to the base or coalition property.”

The U.S. military statement said SDF fighters visited the site of the rocket’s origin and found a third unfired rocket.

The Britain-based Syrian Observatory for Human Rights, an opposition war monitor, in an early report about the Friday night rocket attack said “the area has been witnessing attacks by (IS) cells.” It later said that Iran-backed militias “are responsible for yesterday’s rocket fire.”

“Attacks of this kind place coalition forces and the civilian populace at risk and undermine the hard-earned stability and security of Syria and the region,” said Col. Joe Buccino, CENTCOM spokesman.

The SDF said in a statement before midnight Friday that as Turkish drones flew over the al-Hol camp that is home to tens of thousands of mostly wives, widows and children of IS fighters, some IS family members attacked security forces and managed to escape from the sprawling facility. The SDF did not say how many escaped but that they were later detained.

Kurdish authorities operate more than two dozen detention facilities scattered across northeastern Syria holding about 10,000 IS fighters. Among the detainees are some 2,000 foreigners whose home countries have refused to repatriate them, including about 800 Europeans.