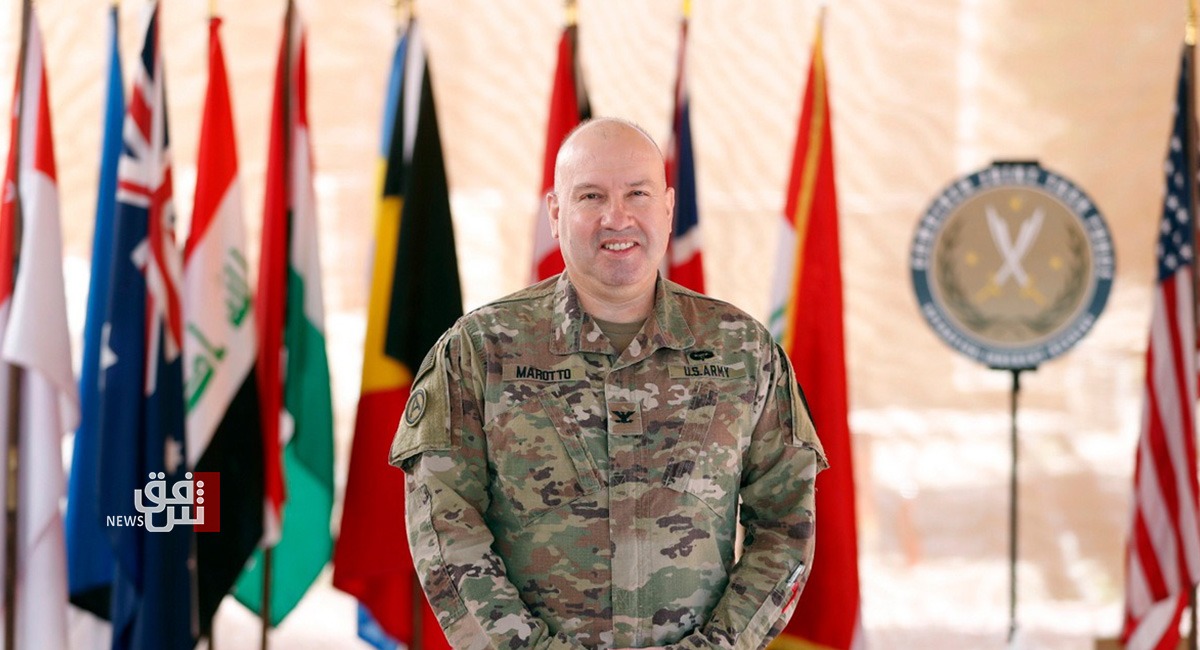 Shafaq News/ In an endorsement to Iraq's endeavors to deter the resurgence of the terrorist organization of ISIS, the Global Coalition Against Daesh/ISIS devoted a total of four billion U.S. dollars, a senior official in the Coalition said in an exclusive statement to Shafaq News Agency.

The official military Spokesman for Operation Inherent Resolve (OIR), and the 83-member of the Global Coalition to Defeat Daesh (ISIS), Colonel Wayne Marotto, accused "Outlaw Groups" of waging attacks on "contracted the civilian logistic convoys driven by Iraqi civilians", asserting that the Coalition troops retrograde to zero is solely dictated by the "technical talks" between the U.S. and Iraqi Governments.

Earlier this year, April, agreed to shift the mission of the Global Coalition to Defeat Daesh/ISIS from "Direct Combat" with the terrorist organization to providing "additional support for Iraqi forces, including advice and training" while scheduling the withdrawal of the Coalition troops from the country.

Since 2014, the United States of America spearheaded a Global Coalition to deter the insurgence of the "Islamic State in Iraq and Syria" that engulfed nearly one-third od Iraq's area back then. More than 3000 troops of the Coalition are currently stationed in Iraq, only 500 of whom are non-U.S.

"The Coalition's mission has not changed. We are in Iraq at the request of its government. We work with our partner forces – the ISF and the Peshmerga - and are committed to the enduring defeat of ISIS. The Coalition continues to provide intelligence, surveillance, reconnaissance, logistics, advising, and enabling partner forces at the operational and strategic levels. We also provide air power when requested," Marotto continued.

He also added, "The fight against ISIS is not yet completed and we are pleased to see that the Iraqi Security Forces have now moved into the lead, and where once the Coalition was fighting beside them on the ground, now the Iraqis are doing the fighting themselves. The mission of the Coalition has shifted from a mission of direct combat to one of more support for them, training, advising, and assisting, often at a very high level, and far away from combat on the ground."

Marotto mentioned that the Counter ISIS Train and Equip Fund (CTEF) program (funded by the U.S. Government) grants equipment to the ISF. OIR oversees the CTEF program. This equipment provides capability critical to Iraqi Security Forces in their ongoing mission to defeat ISIS, "The CTEF program is designed to provide a flexible and reliable source of funding, training, equipment, and operational support to strengthen Coalition partners and ISF capabilities to counter current, emergent, and future ISIS threats. All commanders, who are granted equipment, are properly vetted by both U.S. Department of State and U.S. Department of Defense protocols."

"Since the towers are meant to be re-locatable, they will initially be placed in high-density ISIS locations. The RAID towers and their accompanying accessories to the Iraqi military will provide essential situational awareness necessary for improved security and daily operations in and around Iraqi military bases. The RAID system is a combination of cameras and surveillance equipment positioned on high towers and aerostats, in order to monitor a wide area around important locations. The Combined Joint Task Force – Operation Inherent Resolve will continue to build the capacity and capability of the Iraqi security forces to ensure the enduring defeat of ISIS."

On the mechanism of the Global Coalition forces' presence in Iraq, Marotto said, "Coalition troops are in Iraq at the invitation of the Iraqi government, and we respect the sovereignty of Iraq. The timing of the redeployment of remaining combat forces from Iraq is to be determined and established in upcoming technical talks between the U.S. Government and Government of Iraq."

Regarding targeting the Coalition's logistical support convoys to the Iraqi side, Marotto clarified, "There is a misconception that ISIS or outlaw gangs are attacking U.S. convoys bringing supplies to U.S. bases in Iraq. That is not correct. Historic attack numbers are down, ISIS controls no territory, and their hiding spots are actively pursued by the ISF with Coalition support."

Marotto added that these outlaw gangs are attacking Iraqi contracted civilian logistic convoys driven by Iraqi civilians attempting to earn a living and provide for their families. The equipment being hauled belongs to the ISF, "Most of these convoys are protected by the ISF. To put this into proportion – less than 5% of these civilian contracted convoys were attacked, and the majority resulted in little impact on the mission. Also, there are no U.S. bases in Iraq. Coalition forces are guests at Iraqi facilities."

Coalition forces have been repeatedly attacked in Iraq. Pro-Iranian factions are suspected of being behind the attacks to pressure the Coalition to leave the country.

On January 5, 2020, the Iraqi parliament voted in favor of a resolution calling to remove foreign troops, including the United States, from the country.

ISIS is crippled in Iraq

The Global Coalition's spokesman pointed out, "ISIS remains a serious challenge, but relentless pressure by our security partners in Iraq and Syria is preventing a reemergence of ISIS."

"ISIS leadership, finances, and recruiting are crippled in Iraq. ISIS continues to pursue an insurgency with hit and run tactics, assassinations, kidnappings, and criminal activity to fund terrorism. The image ISIS portrays is increasingly at odds with reality. ISIS is no longer able to sustainably occupy any territory in Iraq and Syria," Marotto continued.

"Despite a summer 2020 increase in simple low-level attacks by ISIS, CJTF-OIR has not observed any indication of a resurgence. Historic attack numbers are down, they control no territory, and their hiding spots are actively pursued by the ISF with Coalition support. It is important to remember that the Iraqi Security Forces, have made positive strides in professionalism and their ability to operate independently to keep the pressure on ISIS. That progress has made it possible for the U.S. to drawdown forces substantially. The Iraqi Security Forces have now moved into the lead, and where once the Coalition was fighting beside them on the ground, now the Iraqis are doing the fighting themselves. The mission of the Coalition has shifted from a mission of direct combat to one of more support, training, advising, and assisting, often at a very high level, and far away from combat on the ground."

On the Coalition's cooperation with Iraqi forces and their support mechanism, he said, "The Coalition will continue to provide operational-level advising and divestments through the Counter-ISIS Train and Equip Fund in support of both the Iraqi Security Forces and Kurdish Security Forces, as they seek to close the existing security gap through close coordination of operations and unity of effort. Support for these joint security mechanisms is crucial to ensure the enduring defeat of ISIS."

Marotto elaborated, "ISIS remains a serious challenge, but relentless pressure by our security partners in Iraq and Syria is preventing its reemergence. ISIS is no longer able to sustainably occupy any territory in Iraq and Syria. The Coalition and partner forces have been successful in defeating ISIS on the battlefield. ISIS no longer controls 110,000 sq. km. or rules over 8 million people. Its territory now consists of caves, tunnels, and desert – the last redoubt of the so-called caliphate."

Recently, ISIS attacks have increased, particularly in the area between Kirkuk, Saladin, and Diyala.

In 2017, Iraq declared victory over ISIS by regaining its entire territory, estimated to be about a third of the country invaded by ISIS in the summer of 2014. However, ISIS continues to maintain sleeper cells in large areas of Iraq and launch attacks between different periods.

Armed feminist factions... What are their roles and ways to escape from inspection?

Peshmerga and Asaish start a military operation near a disputed area

Joint statement by Ministers of the Global Coalition to Defeat ISIS