U.S. crude contracts for May fell below zero, reaching $ 40.32 (negative) per barrel, meaning the seller is willing to pay the buyer in exchange for taking the quantities of oil mentioned in the May contract.

On Wednesday, Brent contracts fell below the level of $ 16 a barrel, the lowest level since 1999.

The oil market is witnessing sharp fluctuations in light of the decline in global demand for crude due to Corona pandemic and the measures that have been taken to limit the spread of the virus, as economic activities in many countries of the world have declined, in addition to that, global crude inventories are almost completely filled with oil.

In light of these fluctuations, the International Energy Agency and the Organization of Petroleum Exporting Countries reduced their forecasts for global demand for current world oil.

To support the markets, the countries of the "OPEC +" group agreed to reduce the group's production by 9.7 million barrels per day in May and June of this year, provided that the cuts are reduced in the second half of 2020 to April 2022.

Lukoil in Q3: rebounds from Q2 losses and boosts oil output in Iraq

Abdul-Jabbar as a head of SOMO, official document says 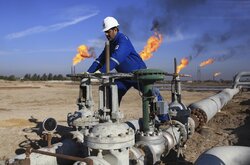