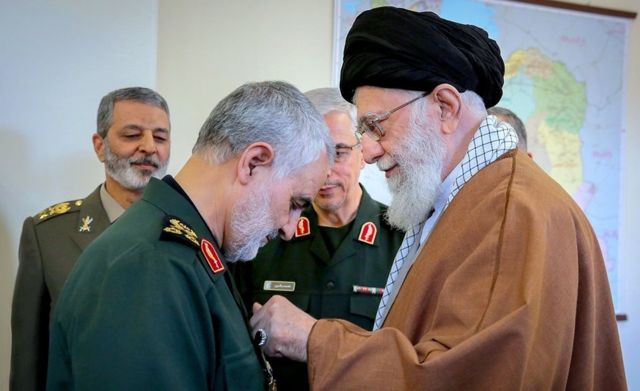 Shafaq News / Iran will not abandon plans to avenge the 2020 U.S. killing of Quds Force Commander Qassem Soleimani, despite "regular offers" from Washington to lift sanctions and provide other concessions in return, a top Iranian official said on Thursday.

Over the last year, Iran and the United States have engaged in fitful, indirect talks in Vienna to revive a 2015 nuclear deal that then-President Donald Trump reneged on in 2018 and that Iran, in turn, began violating in 2019.

Under the 2015 Joint Comprehensive Plan of Action (JCPOA), Iran agreed to limit its nuclear programme in return for relief from economic sanctions.

While they appeared close to resurrecting the deal in March, talks stalled over last-minute Russian demands and whether Washington might drop Iran's Islamic Revolutionary Guard Corps (IRGC), which includes the Quds Force, from its Foreign Terrorist Organization (FTO) list.

"The enemy keeps sending messages that if we give up on avenging Soleimani, they will give us some concessions or lift some sanctions," Revolutionary Guards' Navy Commander Alireza Tangsiri said.

"This is pure fantasy. The Supreme Leader has emphasized the need for revenge and the Revolutionary Guards' top commander has said that revenge is inevitable and that we will choose the time and place for it," he added.

Asked about the comments, a State Department spokesperson said if Iran wanted sanctions relief beyond the 2015 nuclear deal, it must address U.S. concerns beyond the pact.

While neither Tangsiri nor the U.S. spokesperson specified what they meant, they appeared to be alluding to Tehran's demand that Washington drop the IRGC from its FTO list.

"Iran needs to make a decision," the spokesperson added.

The Quds Force is the foreign espionage and paramilitary arm of the IRGC that controls its allied militia abroad. The Trump administration put the IRGC on the State Department's FTO list in 2019, the first time Washington formally labelled another nation’s military a terrorist group.

Iran to host a conference to discuss the dust storms issues