In Syria camp, forgotten children are molded by IS ideology 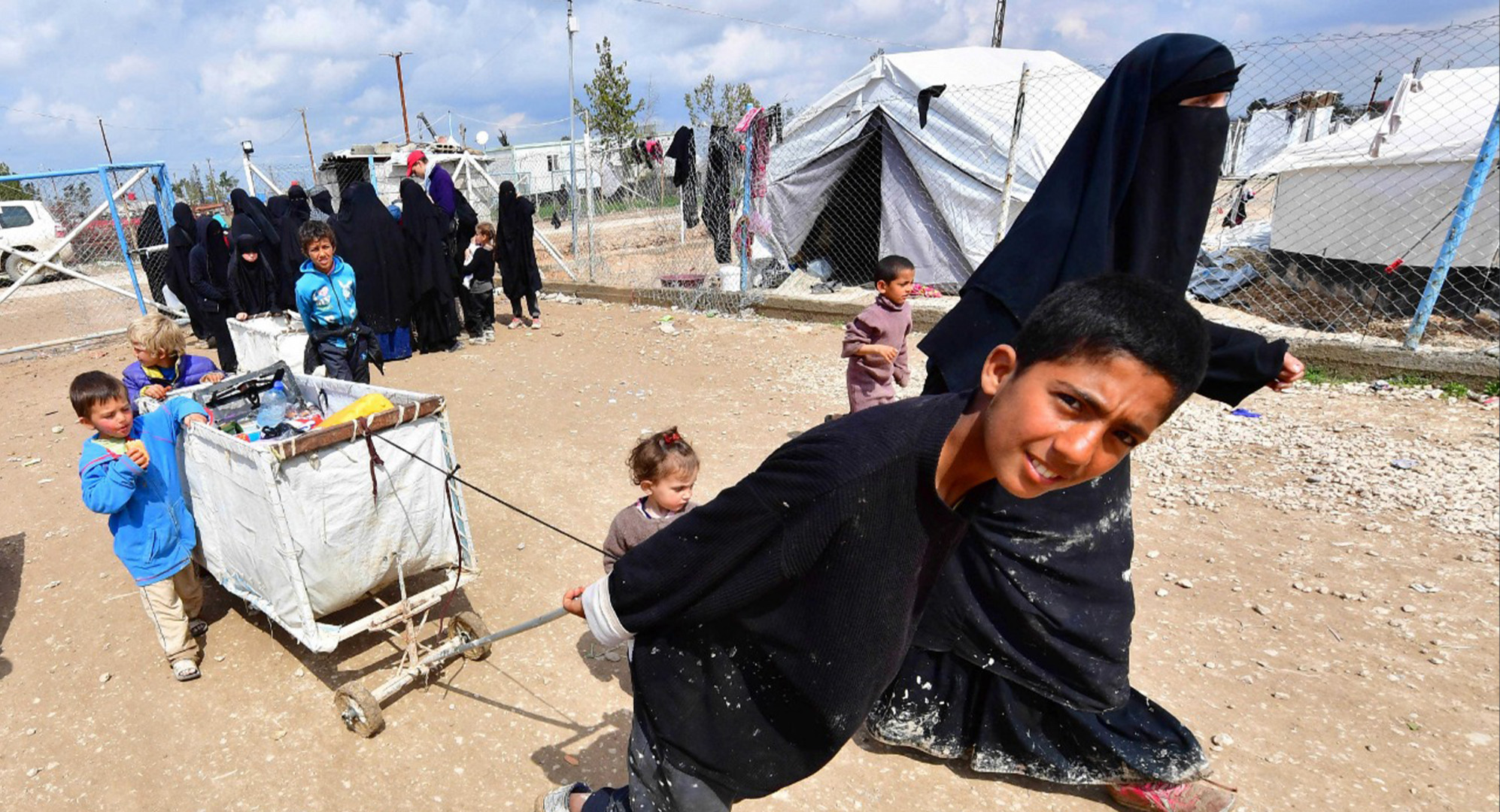 Shafaq News/ At the sprawling al-Hol camp in northeast Syria, children pass their days roaming the dirt roads, playing with mock swords and black banners in imitation of Islamic State group militants. Few can read or write. For some, the only education is from mothers giving them IS propaganda.

Most of them not yet teenagers, they are spending their childhood in a limbo of miserable conditions with no schools, no place to play or develop, and seemingly no international interest in resolving their situation.

Only one institution is left to mold them: remnants of the Islamic State group. IS operatives and sympathizers have networks within the camp, and the group has sleeper cells around eastern Syria that continue to wage a low-level insurgency, awaiting an opportunity for a revival.

Kurdish authorities and aid groups fear the camp will create a new generation of militants. They are pleading with home countries to take the women and children back. The problem is that home governments often see the children as posing a danger rather than as needing rescue.

“These children are ISIS’s first victims,” said Save the Children’s Syria Response Director Sonia Khush. “A 4-year-old boy does not really have an ideology. He has protection and learning needs.”

In the fenced-off camp, row after row of tents stretch for nearly a square mile. Conditions are rough. Multiple families are often crammed together; medical facilities are minimal, access to clean water and sanitation limited; the tents flood in the winter, and fires have broken out from use of gas stoves for cooking or heat.

Some 50,000 Syrians and Iraqis are housed there. Nearly 20,000 of them are children. Most of the rest are women, the wives and widows of fighters.

In a separate, heavily guarded section of the camp known as the annex are housed another 2,000 women from 57 other countries, considered the most die-hard IS supporters, along with their children, numbering 8,000.

The IS influence was clear during a rare visit by The Associated Press to the camp last month. Around a dozen young boys in the annex hurled stones at the team, which was accompanied by Kurdish guards. A few waved sharp pieces of metal like swords.

“We will kill you because you are an infidel,” screamed one child who looked around 10. “You are the enemy of God. We are the Islamic State. You are a devil, and I will kill you with a knife. I will blow you up with a grenade.”

Another child slid his hand across his neck and said, “With the knife, God willing.”

At a market inside the annex where women sold shampoo, bottled water and used clothes, one woman looked at a reporter and said, “The Islamic State endures” — a slogan of the group.

During its nearly 5-year rule over much of Syria and Iraq, IS made a priority out of indoctrinating children in its brutal interpretation of Islamic law, aiming to entrench its “caliphate.” It trained children as fighters, taught them how to carry out beheadings using dolls, and even had them carry out killings of captives in propaganda videos.

A Russian-speaking woman in the annex, who identified herself as Madina Bakaraw, said she feared for the future of the children, including her own son and daughter.

The women in the camp are a mix. Some remain devoted to IS, but others became disillusioned by its brutal rule or by its defeat. Others were never ideologically committed but were brought into the “caliphate” by husbands or family.

The camp began to be used to house the families of IS fighters in late 2018 as U.S.-backed Kurdish-led forces recaptured territory in eastern Syria from the militants. In March 2019, they seized the last IS-held villages, ending the “caliphate” that the group declared over large parts of Iraq and Syria in 2014.

Since then, the Kurdish administrators running eastern Syria have struggled to repatriate camp residents in the face of local opposition to their return or because of the residents’ own fears of revenge attacks. Earlier this year, hundreds of Syrian families left the camp after a deal was reached with their tribes to accept them. Last month, 100 Iraqi families were repatriated to live in a camp in Iraq, but still face sharp opposition among their neighbors.

Some former Soviet Union states have let back some of their citizens, but other Arab, European and African countries have repatriated only minimal numbers or have refused.

“Those children are there through no fault of their own, and they should not pay the consequences of their parents’ choices,” Ted Chaiban, Mideast and North Africa director of the U.N. children’s agency, UNICEF, told the AP. Chaiban visited al-Hol in December.

The Kurdish-led administration says it doesn’t have the resources to maintain and guard the camp.

If home countries won’t repatriate, at least they should help set up facilities to improve children’s lives, said Shixmus Ehmed, head of the administration’s department for refugees and displaced.

“We have suggested schools be opened, as well as rehabilitation programs and fields to do sports,” Ehmed said. “But so far, there is nothing.”

In the camp’s main section, UNICEF and Kurdish authorities had set up 25 learning centers, but they have been closed since March 2020 because of COVID-19. UNICEF and its partners have distributed books for kids to study on their own.

In the annex, authorities have been unable to set up learning centers. Instead, children there are largely taught by their mothers, mostly with IS ideology, according to U.N. and Kurdish officials.

Though the annex residents are considered the strongest IS supporters, the group has a presence in the main section housing Syrians and Iraqis as well.

In late March, the Kurdish-led forces assisted by U.S. forces swept through the camp, seizing 125 suspected IS operatives, including Iraqis and Syrians.

Those sleeper cells had been carrying out a campaign of killings against residents suspected of abandoning the group’s ideology, working as informants or defying its rules by, for example, working as prostitutes for survival. At least 47 people were killed this year, according to Kurdish-led forces, while U.S. officials put the number at 60.

A Syrian woman who left the camp with her five grandchildren earlier this year told the AP she knew of several women killed for alleged prostitution. In each case, a masked man appeared at the woman’s tent, identified himself as an IS member and shot the woman in front of neighbors or even her children, she said.

“The next morning, news spread around the camp,” she said, speaking on condition of anonymity for her security.

She said it was common even in the main part of the camp to see children chanting “the Islamic State endures” and carrying a stick with a black bag tied to it to symbolize an IS flag.

Amal Mohammed, a 40-year-old Iraqi in the camp, said her wish is to return to Iraq where her daughters can live a normal life.

“What is the future of these children?” she said. “They will have no future ... Here they are learning nothing.”