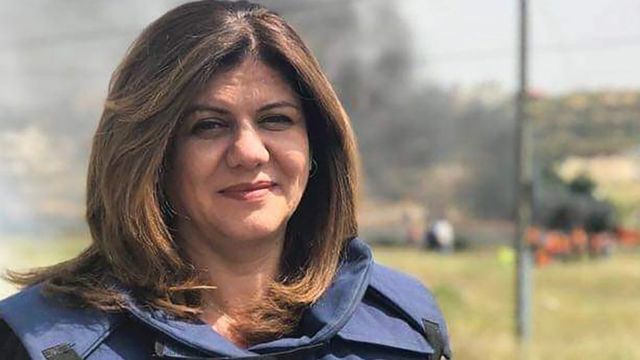 Shafaq News/ The family of Shireen Abu Akleh has expressed outrage at US President Joe Biden, accusing his administration of whitewashing what it called “the extrajudicial killing” of the Al Jazeera journalist by Israeli forces.

In an impassioned letter sent on Friday, days ahead of Biden’s visit to Israel, the family called on the US president to meet with the slain journalist’s relatives, release information that Washington has gathered about the incident so far and push to ensure accountability.

The family urged the Biden administration to retract a July 4 State Department statement that said the bullet that killed Abu Akleh "likely" came from an Israeli army position but concluded that the shooting was not intentional.

"We, the family of Shireen Abu Akleh, write to express our grief, outrage and sense of betrayal concerning your administration’s abject response to the extrajudicial killing of our sister and aunt by Israeli forces on May 11, 2022, while on assignment in the occupied Palestinian city of Jenin in the West Bank," the document, signed by the journalist’s brother Anton on behalf of the family, reads.

The letter goes on to describe Abu Akleh as a role model and a mentor to aspiring Palestinian female journalists, stressing that she was a US citizen.

"Despite wearing a protective helmet and blue bulletproof vest clearly marked ‘Press,’ Shireen was murdered by an Israeli-fired bullet to the head,” it said.

"Israeli forces continued to fire live rounds as bystanders – including other members of the press – tried to render assistance. Then, as we and hundreds of others gathered to begin her funeral procession, Israeli forces attacked us, beating mourners and pallbearers, violently disrupting the dignified burial procession she deserved."

The letter comes four days after the US State Department’s statement on Monday, which framed the killing of Abu Akleh as the unintentional "result of tragic circumstances."

Although video footage, eyewitness testimonies and multiple investigations by independent media outlets have shown that there were no armed Palestinians in the area where Abu Akleh was killed, the US statement emphasised the context of the Israeli raid as a response to "a series of terrorist attacks in Israel."

On Tuesday, State Department Ned Price acknowledged that the United States had not conducted its own probe, but rather the statement was a "summation" of investigations by the Palestinian Authority (PA) and Israel. The US administration also said a "detailed forensic analysis" of the bullet that killed Abu Akleh concluded that it was too damaged to determine its source.

The PA probe, which Washington claims to have summed up in its statement, concluded that Israeli forces deliberately killed Abu Akleh, firing a bullet directly at her head while she was in visible press gear.

Abu Akleh’s family was livid at the US’s position.

"From the failure to immediately ensure an independent and impartial investigation, to the rushed hand-off of the bullet that killed Shireen without consultation let alone allowing us to have a representative present, which culminated in the July 4 statement adopting the conclusions and talking points of the Israeli government, your administration’s engagement has served to whitewash Shireen’s killing and perpetuate impunity," Friday’s letter said.

family also hit out at Price, who said on Tuesday that Israel “is in a position or soon will be in a position to consider steps to further safeguard non-combatants”.

“We are incredulous that such an expectation would be the pinnacle of your administration’s response to the killing of Shireen. Israeli forces have for long known no bounds, perpetrating war crimes and killing Palestinian civilians with impunity, including those clearly identifiable as children, medical personnel and journalists,” the letter said.

"Israeli officials and armed forces are enabled and empowered by unconditional US-sourced weapons and financial assistance and then provided with near absolute diplomatic support to shield Israeli officials from any accountability."

On Friday, Abu Akleh’s family cited US congressional calls for an independent or US-led investigation into the incident, which have so far fallen on deaf ears in the White House.

Last month, dozens of members of the House of Representatives urged an FBI probe into the incident. Key Republican Senator Mitt Romney also joined Democrat Jon Ossoff in calling for an independent investigation. Late in June, 24 Democratic senators demanded direct US involvement in the probe.

“The Beast” can't go to the G7 Summit