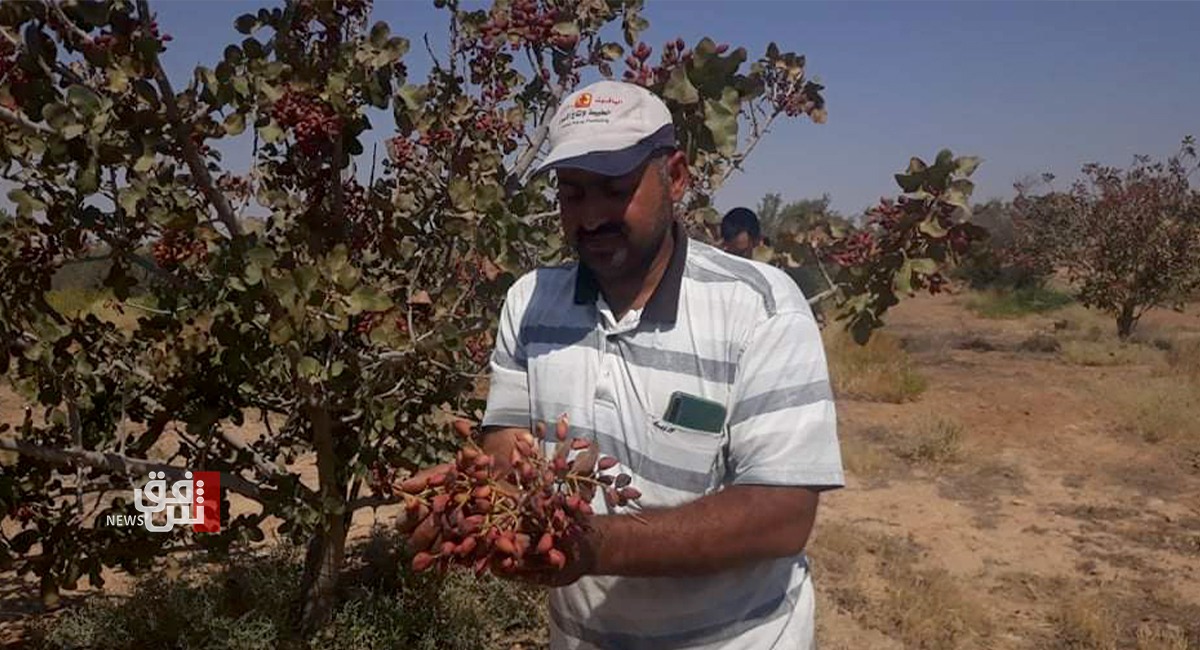 Shafaq News/ Three years have passed since the liberation of Al-Anbar from ISIS's hegemony. Still, a large part of Al-Anbar's desert's oases -which are invested in pistachio cultivation- remain idle for fear of what farmers describe as "ISIS treacherous attacks".

More than 45 oases blossom in the upper Euphrates areas, concentrated between Hit, Al-Baghdadi, Haditha, Anah, Alos, Rawa, and Kubaisa, inside the desert areas. Springs and streams pump life into the deserted area spurring investments in various agricultural aspects. Nevertheless, the pistachio tree edged by a margin due to its ability to withstand the vagaries of the climate and lack of constant care.

Security circumstances and tightening the grip by Iraqi forces at the desert's entrances demotivated Pistachio growers. Last year, only ten oases actively cultivated and marketed their products. The rest were abandoned to wither in silence.

According to Abd Al-Jughaifi, an agricultural engineer who works as an oases supervisor near Haditha, "investment in agriculture can compensate the country for part of the oil price crisis, provide the country with foreign currency, and enhance self-sufficiency."

"In al-Anbar, we have more than 60,000 pistachio trees before the invasion of ISIS, but now the number has almost halved. Yet it is possible to re-invest in pistachio farms as there are ready oases and natural resources; we have water, soil, climate, and labor as well", Al-Jughaifi told Shafaq News agency.

"The price of a pistachio kilo is about 10 dollars, and each tree carries about 12 kilos, meaning that the production of each tree is equivalent to three barrels of oil. Unfortunately, only a few pistachio farms have entered production this year because there are oases deep in the desert near Wadi Al-Qadhif, Wadi Al-Abyad, and Wadi Hauran, where terrorist activities continue to exist", he added.

"The army forces impose strict measures on entering the desert. Any entry to it without the forces' knowledge may subject who enters to bombardment by the Iraqi Air Force or the International Coalition Forces", Al-Jughaifi said.

Iraqi pistachio competes with the Iranian

"The term 'oasis' is an official term. We call it farms. It is called an oasis, as it is a green area in the middle of barren land", Mozahem Al-Obaidi, an investor in Al-Ayoun Oasis near Kubaisa told Shafaq News agency.

"There is usually a water spring, rich wells, or permanent ponds because they fall on the flood stream in the valleys, so there are plants and green land all the time. Pistachios have succeeded in holding up and growing more than other plants, so all investors decided to rely on it because it is profitable in terms of its price. Still, some oases are disrupted due to the security situation", he continued.

Al-Obaidi called on the Ministry of Commerce to "pay more and better attention to agriculture for Iraqis to consume local pistachios rather than import it from Iran with foreign currency".

Fear of the powerful

Ali Al-Hayyani, a marketer in Ramadi, said that the oases had not been affected much by the years of fighting and neglect, hoping that the government will support investors, "Some are afraid to reveal the whereabouts of these oases and invest in them. They fear from the powerful people competition".

Sami Hussein, head of agricultural engineers in Al-Anbar, told Shafaq News agency that they currently have "more than 18,000 pistachio trees and other oases are habitats more. They cannot be cared for or accessed because of concerns about the presence of ISIS operatives there. Farmers need nothing more than support, encouragement, and supplies".

"Al-Anbar desert can be exploited by reproducing these natural oases, creating other industrial ones, or even expanding the real ones to cultivate them," said Qatari Al-Obaidi, the mayor of The Jabah sub-district of Al-Baghdadi district.

Al-Obaidi told Shafaq News agency that there are many neglected arable areas in Al-Anbar, "We hope that the agriculture sector in Iraq will be paid more attention, as it has already been proved that we cannot rely solely on oil after its price crisis."

ISIS operates in Iraq through border gaps and hidden tunnels

On the fourth anniversary of its defeat, ISIS infiltrates the political haze