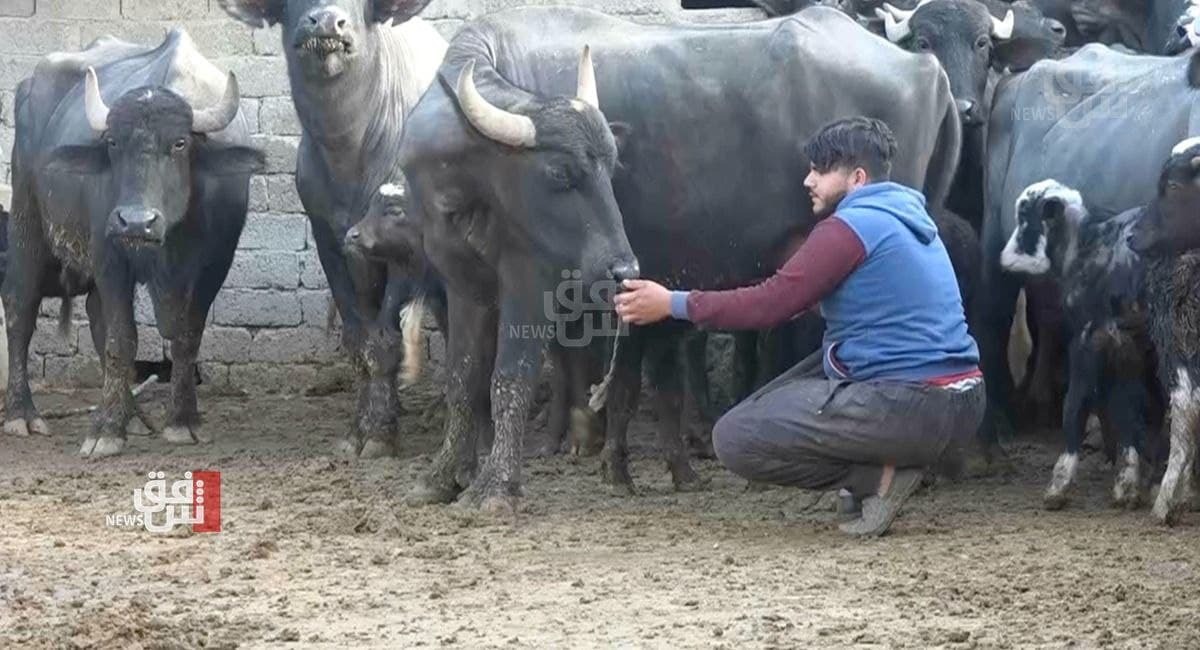 Shafaq News/ Drought and water scarcity in Iraq have harmed not only agriculture, but also the biodiversity of water animals and amphibians.

The Iraqi Marshes have been home to water buffalo for millennia. However, those animals' flocks have recently been shrinking due to low water levels in rivers, marshes, and swamps, making it harder for them to survive.

The correspondent of the Shafaq News Agency interviewed water buffalo breeders and others involved in the issue to gain a better understanding of the full scope of this environmental and economic crisis, which has escalated into a real threat to which the government and concerned authorities are yet to respond.

Um Nargis, a mother of six, who lives on the outskirts of al-Hamza al-Sharqi district of al-Diwaniyah governorate, was forced to sell her three buffaloes because of the scarcity of water, "I was not the first who had to sell her Buffaloes, my neighbors did it recently. We suffer a lot to secure potable water, let alone finding water deep enough for water buffalo to submerge in.”

"Buffalo breeders are losing 15-25% of the animal's price due to drought, with prices falling to 1.5 million Iraqi dinars down from four million dinars per animal," said Jassim al-Assadi, a consultant engineer at Nature Iraq.

"Buffalo breeders in Iraq face another dilemma after the drought that began in 2018 when water levels began to decline gradully to low levels in al-Chibayish marshes in Dhi Qar governorate as well as in al-Hammar marsh," he said.

"The water has fallen below 90 cm at sea level. Only some deep lakes and canals of shallow marshes left."

"There are villages that are constantly suffering from severe drought, namely, Hajsat Hallab, accompanied by a lack of fed support, the price of which has increased from 300,000 dinars to 700,000 dinars," he added.

"There are villages that are constantly suffering from severe drought, namely, Hajsat Hallab, accompanied by a lack of fed support, the price of which has increased from 300,000 dinars to 700,000 dinars," he added.

"Water releases at the borders of the Muthanna and Dhi Qar governorates only reached less than 60 cubic meters per second, while evaporation has also taken a toll on Iraqi waters, where we lose an average of 1-2 cm of water per day. Water levels in Hor al-Hawiza reached only four meters out of 30 cubic meters, compared to one and a half meters in the village of Abu Zarach, which should have prompted the Ministry of Water Resources to create lakes for water buffalo breeding and to provide subsidized feed."

"Drought directly affects livestock in Iraq, particularly this animal, due to the dryness of the water bodies, which are the home of water buffalo breeding," said Hadi al-Yasiri, spokesman for Agriculture Minister.

According to him, "the ministry has taken the initiative to provide feed and feed seeds for cultivation to support farmers and encourage them to maintain their livestock and land, as well as to coordinate international support to protect buffaloes from any harm that may result from drought."

"Livestock production is one of the most important pillars of the economy in nations suitable for raising livestock and poultry because of its economic importance to meet the basic needs of the Iraqi family. However, the level of livestock production in Iraq does not meet the local demand, due to the poor economic policy that Iraq has been witnessing since 2003," said Ahmed Eid, an economic researcher.

"Production has decreased significantly due to several factors, including natural and human factors; the former includes drought, low water flow, and low level of feed cultivation, while the latter is represented by successive governments ignoring this vital and important sector, from lack of support, to lack of real opportunities for domestic production, and increased level of import."

He continued, "The high cost of feed and the lack of support, which pose a serious threat to livestock in general and buffalo in particular, are two of the most significant issues that have plagued and continue to plague buffalo breeding in Iraq. The migration of breeders to the city was the icing on the cake; many of them left the fields and marshes and moved there because they were unable to continue due to the significant losses they had endured."

"The government must uphold its commitments under the Emergency Support for Food Security and Development Act, assist the livestock sector, and bolster Iraq's national economy with the income from this crucial sector," Eid said.

Water justice in Iraq in the aftermath of war

With experience and skill, Syrian workforce pulls the rug from underneath Iraqi construction workers