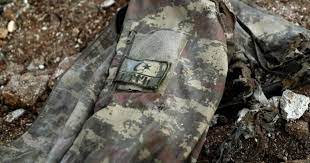 Shafaq News/ A Turkish soldier perished during clashes with the Kurdistan Workers Party (PKK) in the Kurdistan Region, according to a statement by Turkey’s Ministry of Defense issued on Sunday.

The soldier, Islam Ciftci, succumbed to the wounds he sustained during confrontations with the PKK militants during a mission in northern Iraq.

Attempts to resuscitate the soldier failed to transfer him to the hospital breathing, the statement added.

Since April, Turkey has carried out two intense campaigns against the PKK in the northern governorate of Duhok. The offensives are only a shred of a lifelong history of bitter conflict between Ankara and the PKK.

Erbil police: cars ‘trade is in exhibitions not streets

US consulate in the Kurdistan region condemns yesterday's attack on Erbil

Direct flights from Erbil to Paris to begin in May

Erbil hosts a gold conference for Local and international companies