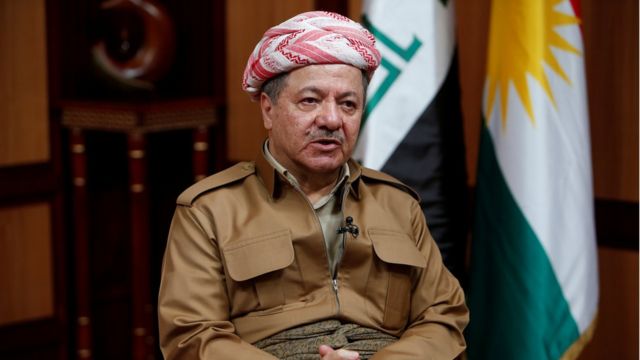 Shafaq News/ Kurdish leader Masoud Barzani on Sunday urged the people of the Kurdistan region to "remain resolute in the face of threats" in the aftermath of the midnight attack on the capital city of Kurdistan, Erbil.

"I want to state here that no lies can ever stand to the strength of the truth," he added, "I call upon the people of Kurdistan to remain resolute in the face of these threats."

Kurdistan's President, Nechirvan Barzani, denounced the attack as "heinous and unjustified", urging the Iraqi government and the international community to deter the violations to Iraq's sovereignty and the safety of its people.

"Coping with the challenges, threats, and precipices, requires all the parties and components of Kurdistan to pursue cohesion and unity," the President said in a statement this morning.

President Barzani deemed the repeated attacks on Erbil a "perilous antecedent and a flagrant violation to Iraq's security, stability, and sovereignty."

"The only implications [of the attacks] will be complicating the situation, as well as causing damage to the present and future Iraq as a whole," he added.

"We demand the Iraqi federal government and the international community to recognize these offensives and spare no effort to curb the country's sovereignty and stability, and the people's security and safety."

The leader of the Sadrist movement, Muqtada al-Sadr, shared an outraged tweet shortly after the attack, "In the name of God, Erbil is under the fire of loss and betrayal, and under pain of starvation, as if the Kurds were not Iraqis. Rather, they are the lung of Iraq and its indivisible part."

"Erbil will not kneel except for moderation, independence and sovereignty. Peace and love for you, Erbil, and you Kurds, and patience until the achievement of: #National_Majority_Government," tweeted al-Sadr.

Iraqi caretaker Prime Minister Mustafa al-Kadhimi tweeted, "the aggression which targeted the dear city of Erbil and spread fear amongst its inhabitants is an attack on the security of our people. I discussed these developments with the KRG PM. Our security forces will investigate and stand firm against any threats towards our people."

Prime minister of the Kurdistan Region, Masrour Barzani, tweeted, "Erbil does not bow to cowards. I strongly condemn the terrorist attack on parts of Erbil and call on the brave and patient people of Erbil to be patient and to follow the instructions of the security agencies. I thank you for your patience."

The Iraqi President, Barham Salih, cast "suspicions" on the timing of the "deplorable" attack amid signs indicative of a "political detente".

Salih called for a firm stance against the attempts to plunge the country into chaos, endorsing the security forces, establishing the state's status as a reference, and combating outlaws.

The Speaker of the Iraqi parliament, Mohammad al-Halboosi, said that the attack on Erbil constitutes an attack on the sovereignty of Iraq and its people, calling for a united national position to curb it.

In a statement it issued this morning, United Nations Assistance Mission for Iraq (UNAMI) said it "strongly condemns [the] heinous missile attacks on Erbil."

"Iraqis are called upon to stand together in the face of any act that violates Iraq’s sovereignty/territorial integrity,and/or aims to undermine stability/unity," it continued, "perpetrators of this cowardly attack must be held to account."

A dozen of missiles emanated from Iranian territory have fell near a building under-construction of the US consulate in Erbil at midnight.

Kurdistan's Counter-Terrorism Service said that 12 ballistic missiles were fired from "outside the borders of Iraq and the Kurdistan region, specifically from the east."

Aside from minor injuries to two citizen living nearby, the attack resulted in no human casualties, local officials announced this morning.

According to Kurdistan 24 reporter Barzan Sadiq, the Kurdistan 24 studio in the area was reportedly damaged in the attack.

Independent open-source intelligence (OSINT) accounts shared videos reportedly shared by Iranian civilians showing missiles being fired from Iran at the time of the attack, with at least one of the videos being geolocated to a site in Khasabad in the East Azerbaijan province of Iran.

Kurdish leader receives a US delegation in Erbil