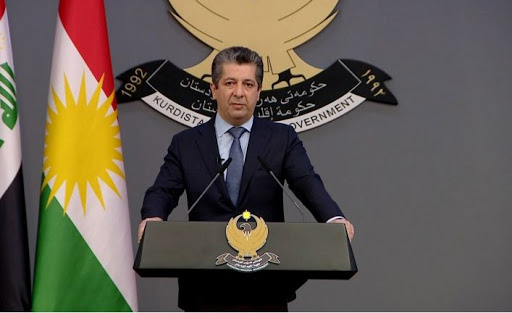 Shafaq News / Kurdistan’s Prime Minister, Masrour Barzani condemned on Tuesday the rockets attack on the US embassy in Baghdad.

Barzani said in a tweet on “I condemn last night’s attack on the US Embassy in Baghdad.

Diplomatic missions take enormous risk to be in Iraq. They are here to help confront terrorism and rebuild Iraq.

I urge the federal govt (Government) to take practical measures to ensure their safety.”

The attacks must stop -mb.”

In the past months, the US bases in Iraq have been targeted with series of attacks.

Washington blames such attacks on Iranian-backed militia groups. Iran has not directly commented on the incidents but little-known groups believed to be connected to Iran-aligned militias have claimed some attacks.

Kurdistan’ PM receives the US ambassador to Iraq