KRG: views of CPC does not reflect our policy 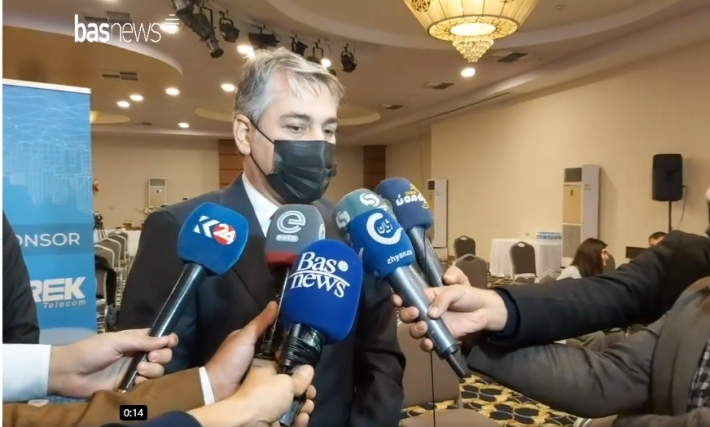 Shafaq News/ The Kurdistan Regional Government (KRG) is committed to the foreign policy of Iraq, spokesperson to the Region's government Jotiar Adel said on Saturday.

Adel tweeted, "The KRG was not made aware of the Center for Peace Communications (CPC) conference ans was held without our approval or knowledge."

"The views of the conference does not reflect the views & policies of KRG," he added, "The KRG will take necessary measures to follow up on how this meeting was held."

Yesterday, Kurdistan's Presidency denied acknowledgement to the "Peace and Reclamation" (al-Salam and al-Istirdad) Conference that took place in the Region's capital city, Erbil, stressing that "Foreign Policy" is a prerogative of the Federal Government solely pursuant to the Iraqi Constitution.

"We reiterate that foreign policy positions, directions and issues fall under the authority of the Federal Government according to the Constitution, and the Kurdistan Region follows Iraq’s foreign policy entirely," the Presidency said.

The President's office urged" all Iraqi parties and sides not to lose sight over this issue as we all await the outcome of an investigation carried out by the Kurdistan Regional Government’s Ministry of Interior."

Kurdistan's Ministry of Interior on Saturday announced its outright rejection of calls made to normalize ties with Israel during a conference a day earlier in the Region's capital city, Erbil.

In an unprecedented plea for regional, over 300 Iraqi figures called for their country to normalize ties with Israel on Friday night.

The group, which includes Sunni and Shiites, youth activists and tribal leaders, said the next step after the dramatic announcement would be to seek “face-to-face talks” with Israelis and joining the Abraham accords that UAE and Bahrain, among other Arab countries, ratified recently.

A statement issued by the Ministy of Interior of Kurdistan said that the organizers submitted a request to organize an event that promotes "Co-existence" and "Federalism per the Permanent Constitution of Iraq".

"However, some organizers derailed the workshop from its objectives and exploited it in a matter that fulfil the terms by which the license was granted," according to the statement.

Some speeches delivered during the event do not match the official policy of the Kurdistan Regional Government, the statement said, "therefore, the Ministry of Interior will initiate legal proceedings against the persons who derailed the meeting and will punish them."

"The Kurdistan Region of Iraq, as a constitutional entity and a part of a Federal Iraq, is committed to the official foreign policy of the Iraqi state and will not allow exploiting the freedom and democracy it pevails for other political purposes or intentions," it added, "the culprits will be expelled. They will not be allowed to have a foot-stand in Kurdistan."

Iraq's federal government rejected the conference's call for normalisation in a statement on Saturday and dismissed the gathering as an "illegal meeting".

The conference "was not representative of the population's (opinion) and that of residents in Iraqi cities, in whose name these individuals purported to speak," the statement said.

The office of Iraq's President Barham Saleh, himself a Kurd, joined in the condemnation.

Powerful Shiite cleric Moqtada Sadr urged the government to "arrest all the participants", while Ahmed Assadi, an MP with the ex-paramilitary group Hashed al-Shaabi, branded them "traitors in the eyes of the law".

The 300 participants at the conference came from across Iraq, according to CPC founder Joseph Braude, a US citizen of Iraqi Jewish origin.

Speakers at the conference included Chemi Peres, the head of an Israeli foundation established by his father, the late president Shimon Peres.