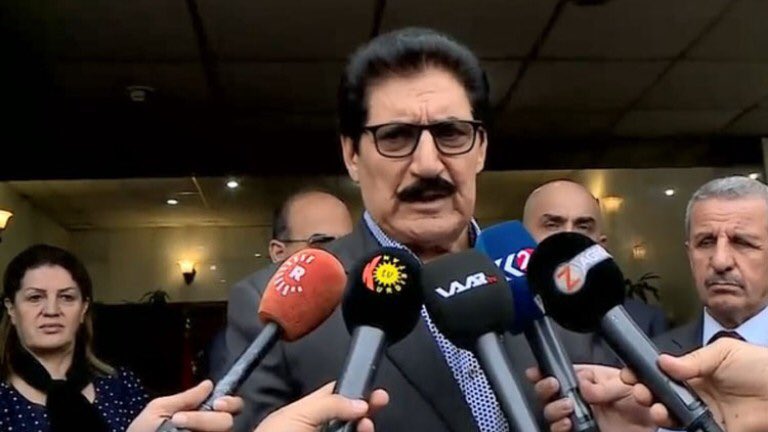 Shafaq News/ The head of the Kurdistan Democratic Party (KDP), Masoud Barzani, will meet with the Co-president of the Patriotic Union of Kurdistan (PUK), Bafel Talabani, to discuss the ongoing row between the two leading parties in the Kurdistan Region over the presidency of the republic, secretary of the KDP Politburo Fadhel al-Mirani said in a statement to "Voice of America" (VoA) on Thursday.

"Talabani will visit the leader Masoud Barzani. We shall have another candidate [for the post of presidency], whether we agreed with the PUK or not, whether the Supreme Federal Court made up its mind or not," al-Mirani said in reference to the KDP temporarily suspended candidate, Hoshyar Zebari.

"If necessary, our other candidate might be Fuad Hussein for instance. However, it is all contingent upon the meeting between Bafel Talabani and leader Barzani," he said, "we hope the meeting ends on a positive note in order to schedule a meeting between the Politburos of both parties later."

MP Mesh'an al-Jubouri of al-Siyada bloc, an alliance of the Sunni leading blocs Takaddom and Azm, told Shafaq News Agency that the KDP is pondering alternatives to Zebari even though it is adamant about keeping him as the prime candidate of the party.

"I believe that the President of the Kurdistan Region, Nechirvan Barzani, or the incumbent Foreign Minister, Fuad Hussein, might be the alternatives. They both enjoy popularity in Baghdad. Any of whom maybe the president," he said.

PUK MP Mulla Karim Shakour told Shafaq News Agency that the row being played out between the KDP and PUK does not erode the foundation of the long-standing alliance between the two leading parties in the Kurdistan Region.

"The KDP and PUK are bound by a strategic alliance since 1992. They have ran the Kurdistan Region together, in partnership with other Kurdish parties, since then," Shakour said in a statement to Shafaq News Agency, "such disagreement will not tear up this alliance."

"There is a second chance, in fact, to resolve the row between the KDP and PUK over the presidency," he asserted, "the post is an entitlement of the PUK and the Kurds in general."

Shakour deemed reopening the candidature for presidency a "violation of law and constitution" since Article 70 of the constitution stipulates that a president shall be elected within 30 days without specifying what happens if the vote fails.

Yesterday, Iraq's parliament announced the reopening of registration for presidential candidates, a day after it called off a session to vote in a new head of state.

One of the two frontrunners, former longtime foreign minister Hoshyar Zebari, was "temporarily" suspended by a court, citing years-old corruption accusations after a complaint was filed against him.

Iraq's political timeline for electing a head of state and forming a government, in the wake of last year’s general election, has been derailed amid political infighting.

Monday’s voting session was not held due to lack of a quorum after several key political blocs and parties announced boycotts, against the backdrop of competing claims to a parliamentary majority.

Kurdish Barzani extends al-Adha greetings to the people of the Middle East, World