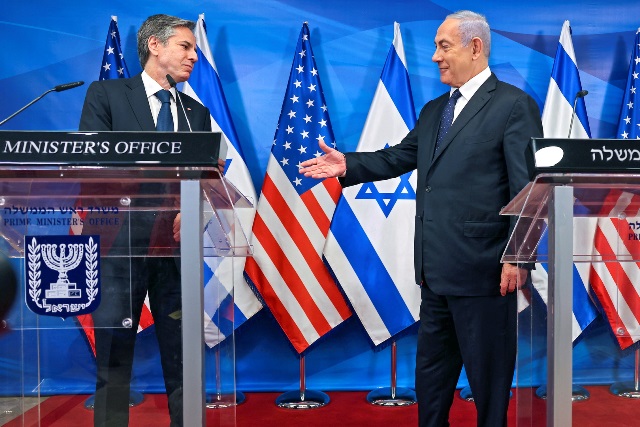 Shafaq News/ The United States pledged Tuesday to aid Gaza while keeping any assistance out of the hands of Hamas. U.S. secretary of State Anthony Blinken said on Tuesday in a joint conference with the Israeli Prime Minister Benjamin Netanyahu.

The 11-day war between Israel and Hamas killed more than 250 people, mostly Palestinians, and caused widespread destruction. The truce that came into effect Friday has so far held, but it did not address any of the underlying issues in the Israeli-Palestinian conflict.

“We know that to prevent a return to violence, we have to use the space created to address a larger set of underlying issues and challenges. And that begins with tackling the grave humanitarian situation in Gaza and starting to rebuild,” Blinken said as he began a regional tour to shore up last week’s cease-fire.

“The United States will work to rally international support around that effort while also making our own significant contributions.” He added that the U.S. would work with its partners “to ensure that Hamas does not benefit from the reconstruction assistance.”

Blinken will not be meeting with Hamas, which does not recognize Israel’s right to exist and which Israel and the U.S. consider a terrorist organization.

He addressed the larger conflict, saying “we believe that Palestinians and Israelis equally deserve to live safely and securely, to enjoy equal measures of freedom, opportunity and democracy, to be treated with dignity.”

Netanyahu hardly mentioned the Palestinians in his remarks, in which he warned of a “very powerful” response if Hamas breaks the cease-fire.

Netanyahu spoke of “building economic growth” in the occupied West Bank, but said there will be no peace until the Palestinians recognize Israel as a “Jewish state.” The Palestinians have long objected to that language, saying it undermines the rights of Israel’s own Palestinian minority.

The war was triggered by weeks of clashes in Jerusalem between Israeli police and Palestinian protesters in and around the Al-Aqsa Mosque compound, a site revered by Jews and Muslims that has seen several outbreaks of Israeli-Palestinian violence over the years. The protests were directed at Israel’s policing of the area during the Muslim holy month of Ramadan and the threatened eviction of dozens of Palestinian families by Jewish settlers.

The truce remains tenuous since tensions are still high in Jerusalem and the fate of the Palestinian families is not yet resolved.

The evictions were put on hold just before the Gaza fighting erupted, but the legal process is set to resume in the coming weeks. Police briefly clashed with protesters at Al-Aqsa on Friday, hours after the cease-fire came into effect.

Adding to the tensions, an Israeli soldier and a civilian were stabbed and wounded in east Jerusalem on Monday before police shot and killed the assailant in what they described as a terrorist attack.

Blinken will head to Ramallah later Tuesday to meet with Palestinian President Mahmoud Abbas, who has no power in Gaza and was sidelined by recent events. Abbas heads the internationally backed Palestinian Authority, which administers parts of the occupied West Bank but whose forces were driven from Gaza when Hamas seized power there in 2007.

Blinken will also visit neighboring Egypt and Jordan, which have acted as mediators in the conflict. Egypt succeeded in brokering the Gaza truce after the Biden administration pressed Israel to wind down its offensive.