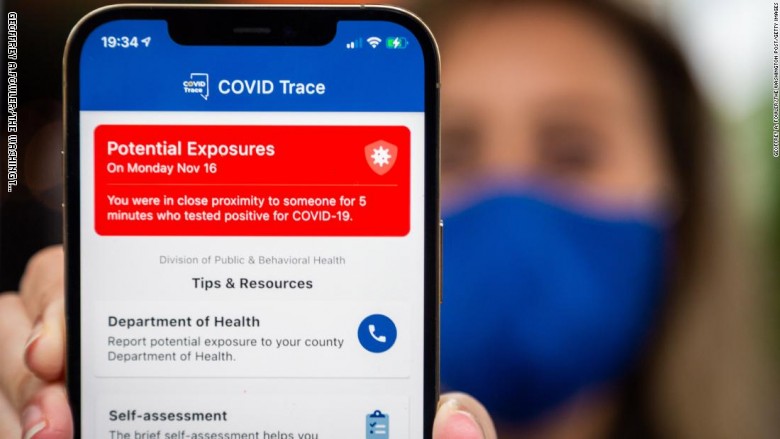 CNN stated, Thanks to technology available on Apple and Google phones, people can now get pop-up notifications in some states if they were were close to someone who later tested positive for Covid-19.

The alerts come via state health department apps that use Bluetooth technology to detect when you (or more precisely, your phone) has been in close contact with an infected person’s phone.

While these apps can’t keep people safe, they could prevent others from getting infected if people take precautions, such as self-quarantining, after receiving an alert.

Millions of people are signing up, although these apps aren’t yet available in many states. Health officials believe the alerts could be especially helpful in cases where an infected person has been in contact with strangers — for example in a bus, train or checkout line — who wouldn’t otherwise know they were exposed.

IPhones and Android devices contain constantly changing anonymous codes that ping nearby phones via Bluetooth — a process that starts once the user opts to get the notifications.

For the exposure notifications to be effective, Android users must turn on Bluetooth and download their state’s Covid-19 notification app.

On iPhones, the system is already baked into settings, although users must go to exposure notifications and make sure availability alerts are on.

When someone who uses the feature tests positive for coronavirus, he or she gets a PIN from a health official to enter into their phone. Any other phone that was nearby in the previous two weeks — usually within six feet or less, for at least 15 minutes — will get an alert telling the user to quarantine and notify a health provider.

At least 15 US states are taking part in this Covid-19 exposure notification system.

Regarding the privacy, The apps don’t collect data on users or their locations, and there is no way to link Covid diagnoses and alerts to names and identities on phones.

Unlike a previous notification system widely touted at the beginning of the pandemic that used GPS, which tracks a person’s location, the Bluetooth system helps maintain privacy and anonymity among users.