Three hundred days of impasse in Iraq: a new election.. or a new regime? 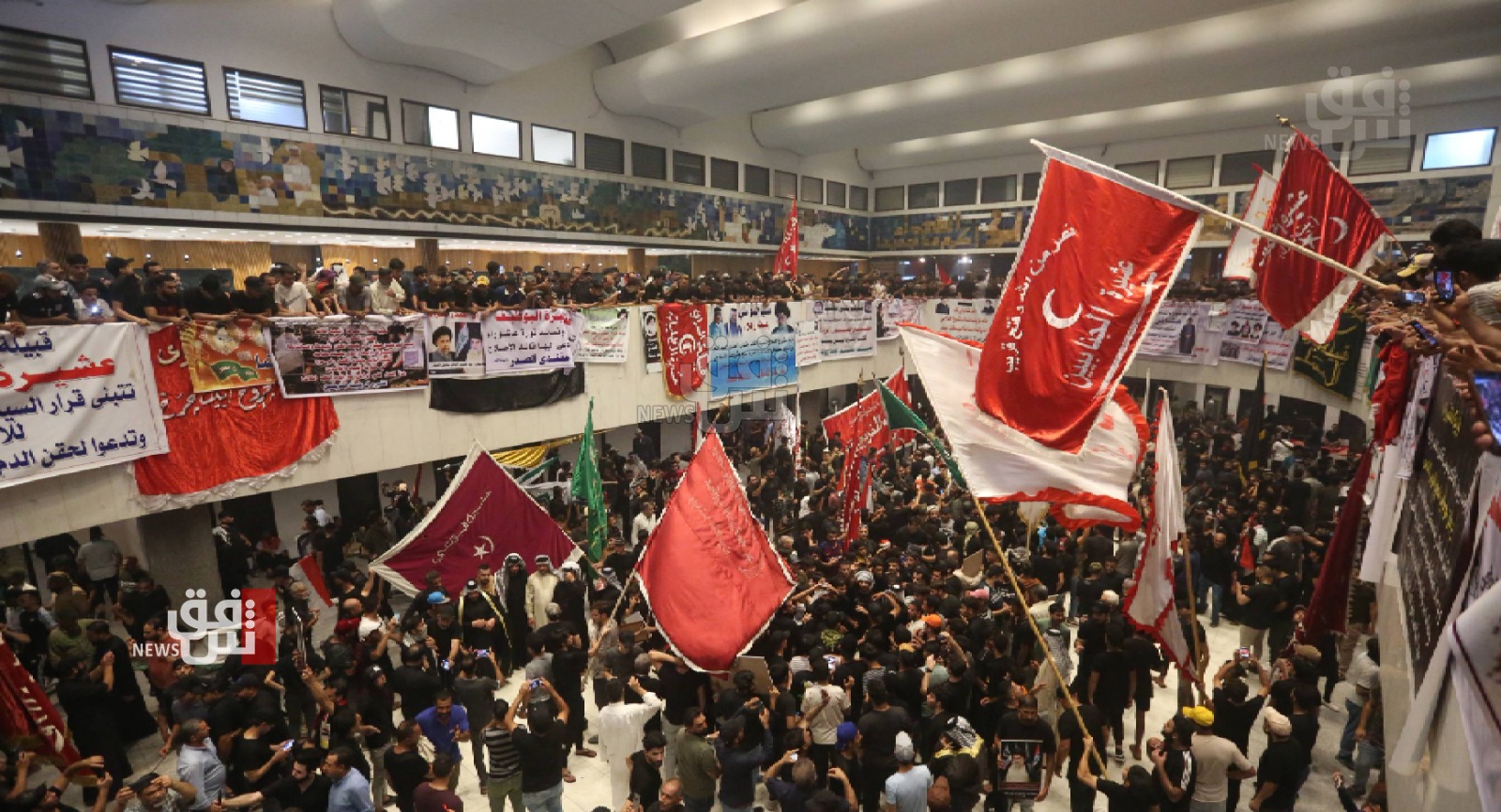 Shafaq News/ Heading toward the end of the first year since its holding, the October 10 election failed to spring a government despite being promoted as a panacea for the country's structural crises, and an opportunity for the anti-status quo parties to integrate elected bodies.

Political divisions have deepened over the past 300 days, especially between "Shiite" arch-foes. On July 27, 2022, thousands of Muqtada Al-Sadr loyalists stormed the parliament to protest the Coordination Framework's attempt to form a new government headed by Mohammed Shia' al-Sudani, a supporter of former Prime Minister Nouri al-Maliki.

With the culmination of the bitter political deadlock in the country, many observers and analysts started to reconsider an overhaul of the entire situation that engendered from the October 10 election, calling for an early election. Others went further to question the efficacy of Iraq's polity, calling for an amendment to the constitution and a switch from parliamentarianism to presidentialism.

Coordination Framework vs. the Sadrist Movement

After Sadrist protests became an open-ended sit-in, the post-election conflict entered a new era. The Coordination Framework had, for the first time, to mobilize its supporters to uphold "the state's legitimacy and constitution."

Political blocs proposed early elections to break the political deadlock in order to prevent a clash between the rivals. However, this choice was rejected by other political forces, not to mention the public's lack of interest in it.

Maryam from Baghdad stated that "nothing would change," adding that "the last election was to change the corrupt parties, but the promised change did not occur. There will be few independent lawmakers in the administration, as most parties will elect their candidates again."

According to Maryam, the resolution of the crisis lies in converting the political regime to a presidential system of governance. She also called on the international community to "help change the regime and put an end to the 19-year chaos in Iraq."

"The low turnout in the previous polls allowed the Sadrist movement and Coordination Framework to garner the biggest share of the votes; if the election is held again, nothing will change, and the scenario will be repeated all over again," said Muntathar from the governorate of Karbala.

While agreeing with Maryam that it is crucial to switch to presidentialism, Montathar added, "ending the control of the parties can only be achieved through the active participation of citizens in the election."

He also firmly rejected any foreign interference in the affairs of Iraq because it "stirs internal conflicts and undermines the interest of the country for the sake of its own interests."

"I have repeatedly called for dissolving the parliament and reforming the election law, certain provisions of which the Federal Court has overturned," Lawmaker Bassem Khashan said.

Khashan told Shafaq News Agency that "the independent lawmakers initiative has proven, in the current situation, to be the solution of the political crisis."

The parliamentarian accused some of his colleagues of playing it safe amid the ongoing row in the country.

"They have chosen to stay neutral. A lawmaker shall be decisive on crucial issues," he added.

Concerning the transition to the presidential system, Khashan stated, "adopting a presidential regime requires a constitutional amendment, which is a complex issue," pointing out, "al-Sadr's call to amend the electoral law is not real. The law was enacted by the Sadrist Movement, so al-Sadr's call to change the political system, the constitution, and the electoral law are all untrue," suggesting that al-Sadr will try to end the crisis and retract his previous statements.

Muqtada al-Sadr, the winner of the largest number of votes in the October polls, withdrew his 74 deputies from parliament last June after failing to form a government that excludes his Shiite rivals (the Coordination Framework).

After months of negotiations, al-Sadr left his rivals in the Framework to form a government.

Analysts told Shafaq News agency that early vote is the most viable option if the Framework and the Sadrists fail to forge a deal, whether by agreement uniting or compromising.

Early election is tied to the government, according to political analyst Sabah al-Agili, "would al-Kadhimi's government remain, or will a new Prime Minister be chosen and given a term of one year to call for early election ? This suggestion may suit the political process if we reach a political deadlock."

The process of dissolving parliament and holding early election is different from changing the governing system and the constitution, according to political analyst Mohamed Ni'naa', who stated that "changing to the presidential system, or starting a coup d'état on the current political class, through a party supported by the people, is undemocratic, where certain forces and parties outside the constitutional, parliamentary, and democratic contexts embrace the rebuilding of the state, as sometimes put forward by the leader of the Sadrist movement Muqtada al-Sadr."

"In parliamentary contexts, it is customary to hold early voting to remedy the situation if the election cannot form a government within no more than 60 days. Therefore, there is a difference between calls to dissolve the parliament and holding an early election, and calls for adopting a presidential system instead of a Parliamentary system."

Prime Minister Mustafa al-Kadhimi's government continues to "conduct day-to-day tasks". However, if the political parties fail to form a new government, its mandate will be extended until a new election is held.

Muqtada al-Sadr’s alliance: An opportunity for Iraq, the US, and the region

HF: What the Firebrand Cleric’s Growing Strength Means for American Policy in Iraq?