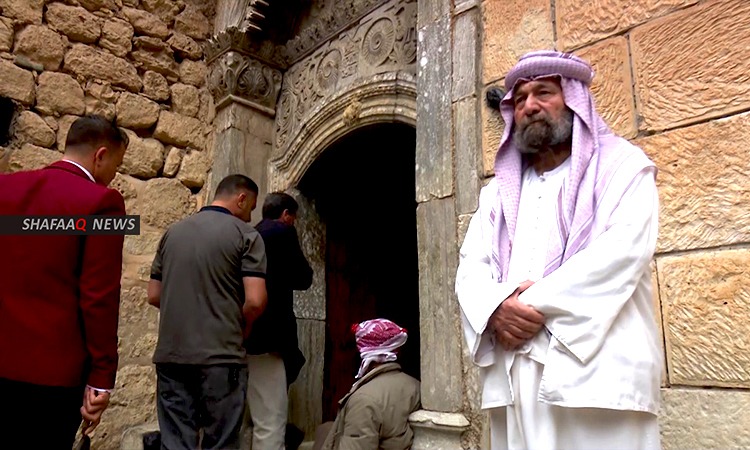 Shafaq News / after the representatives of both Baghdad’s federal government and Kurdistan’s regional government (KRG) signed the “Sinjar Agreement” on Friday, October 9th, an important question arose was the “Article 140” of the constitution –governing the “disputes” between the governments of Baghdad and Erbil- reactivated? Will we see in the next phase the rearrangement of this file on the disputed areas between them –especially in Kirkuk, Nineveh plains, Amerli, and others? Is it a new beginning between Mustafa Al-Kadhimi and Kurdistan; necessitated by political interests, common security challenges, and common economic interests?

The signing of the agreement is still neoteric, and any settlement on a thorny file – like Sinjar- takes time to reinforce its foundations and makes its results clear on the ground. However, there have been many explanatory positions issued by the federal government, the presidency of the government in Erbil, and the Peshmerga; while welcome positions have been issued by the United States and the United Nations, as well as Jordan and Egypt.

“The agreement to reorganize administrative and security conditions in Sinjar is exclusive authority of the federal government –that will be coordinated with KRG; a constitutional commitment of the government towards an authentic component. One of the outcomes of the agreements is the appointment of 1500 Yazidi from the camps and 1000 young people from Sinjar within the security forces”, the Prime Minister’s spokesman, Ahmed Mulla Talal tweeted.

The text of the two-page agreement is entitled, “The restoration of stability and normalization of the situation in Sinjar district agreement”, signed by the federal government representative, Hameed Felih, under-head of the national security service, and representative of KRG, interior minister, Reber Ehmed.

This agreement is the product of weeks of intensive contacts and consultations.

The agreement may not show the enormous complexities that have existed in Sinjar for several years -especially since ISIS invaded the region, but it is certainly aimed at addressing the inflamed points in it; which prevented the return of tens of thousands of displaced people and the reconstruction of the affected area.. Mainly by normalizing the situation in Sinjar, and regulating the administration of the district’s administrative, security, and service aspects; jointly between the federal and Kurdish governments.

To understand the details of the scene in Sinjar, it must be remembered that ISIS invaded Sinjar in August 2014; forcing 350,000 people -mostly Yazidis- to flee towards Kurdistan and nearby mountains. The invaders committed war crimes -according to UN assurances- including the execution of thousands of people in the area and their burial in mass graves, and the imposition of slavery on thousands of citizens, including women and children.

Although it is estimated that 120,000 people have already returned, some 30,000 Yazidi families are still in the displaced camps in Duhok. The majority of those returning to Sinjar face many difficulties of reintegration like lack of basic services for the continuation of life, such as medicine, education, employment, and security. The situation has contributed to the emigration of some 100,000 Yazidis out of Iraq, particularly to Europe.

After the Peshmerga liberated Sinjar from ISIS, the Iraqi army and the Popular Mobilization Forces (PMF) took control of the area and other disputed areas; amid tensions between Baghdad and Erbil over the 2017 independence referendum. Because of this new control, new officials have been installed in Sinjar instead of the elected ones, creating duplication of Sinjar's administration, especially after the transfer of the elected officials to Duhok to follow up on Sinjar's affairs from afar.

To further complicate the scene, the Kurdistan Workers' Party (PKK) established its faction, “the Sinjar Protection Units”, which was part of the PMF. The very existence of the PKK is causing Turkey to use this as a pretext for attacks on the region, which exacerbates the problem of displaced people and the disruption of their return to their areas and villages.

The "Friday Agreement" directly identifies the existence of the PKK and stipulates that it must leave the region. Al-Kadhimi said that his government would work to drive out the PKK and other armed groups that do not belong in Sinjar; Baghdad refuses to use its territory to launch attacks on neighboring countries.

This agreement quickly prompted Hassu Ibrahim, vice-chairman of the Democratic Self-Council in Sinjar -a parallel local government of the PKK- to announce the council's rejection of the agreement.

"Peaceful demonstrations will be organized against the agreement, and we will defend ourselves in the event of our forces being attacked -even though we reject the principle of war to spare Sinjar from further destruction", Hassu İbrahim told Shafaq News agency, and denied the accusations against the Sinjar Democratic Self-Council as a wing of the PKK, saying that the council and the Sinjar protection units were not affiliated with the Workers' Party -which announced its withdrawal from Sinjar in 2018 and that the Sinjar force was a popular mobilization force supported by the Iraqi government.

Hassu also called for the Council's involvement in the determination of Sinjar’s destiny.

On the other hand, the commander of the Peshmerga forces in Sinjar District, Qasim Shashu, welcomed the agreement, and told Shafaq News agency, "We are pleased with the agreement and coordination between the two governments; it will contribute to the return of displaced people to their areas as well as the removal of illegal forces from Sinjar.. Sinjar's future and development are linked to the implementation of this agreement”.

The agreement includes three axes, administrative, security, and reconstruction. The administrative axis consists of several points, including the selection of a new District Administrator with independence, professionalism, and integrity. The security one includes several points, including that the local police, as well as the national security and intelligence services, are solely responsible within the district, also all other armed formations are to be removed outside the borders of Sinjar district.

In addition, strengthening the security in the district by the appointment of 2,500 members of the Internal Security Forces in Sinjar; ensuring that displaced people in the camps are fairly involved in the district, ending the presence of the PKK in Sinjar and its outskirts.

In doing so, the federal government will regain control of Sinjar and manage the security file in coordination with KRG.. This would block the Turkish pretext of the existence of the PKK -which may have to seek shelter elsewhere, possibly the Qandil Mountains.

The agreement also means the presence of the PMF in Sinjar must end; which led Qais Khazali to say, “The Sinjar agreement -that included the removal of the PMF who liberated Sinjar, is a political courtesy and an electoral reward at the expense of the Yazidis who suffered enough from the previous situation and are meant to suffer again with this new agreement. The national forces have to express their opinion on this subject, and to have courtesy in a position commensurate with the importance and seriousness of this agreement”.

The PMF is likely to be trying to scrutinize how the Sinjar agreement affects the resilience of its movement towards the Syrian border.. As the route from Iraq through Al-Anbar to Syria has shifted to a risky one.

After the agreement was finalized, Kurdistan’s President, Nechirvan Barzani thanked the Iraqi Prime Minister, Mustafa Al-Kadhimi, for playing a prominent, active, and helpful role in the success of the talks that led to this agreement; as well as the support and participation of Jeanine Hennis-Plasschaert, special representative of the UN Secretary-General in Iraq, and her efforts to reach the agreement, and all those who cooperated and helped to reach it.

"We view the agreement as positive, optimistic, and a correct national step in the interest of the whole country.. It will lead to the rebuilding and strengthening of trust between the Iraqi federal government and Kurdistan’s regional government. We hope that similar steps will be taken to resolve all problems between the two sides, and result in the return of the Yazidis and all the people of Sinjar with pride, safety, and without problems, also lead to the stability and reconstruction of the region”, said Nechirvan Barzani.

Kurdistan’s Prime Minister, Masrour Barzani said, "The important agreement reached with the federal government to normalize the situation in Sinjar, was the result of months of hard work and negotiations between officials in Erbil and Baghdad.. It will be the beginning of the implementation of Article 140 of the constitution”.

The agreement has not set a timetable for the implementation of its provisions, and its signs of success are expected to begin to emerge -particularly concerning the withdrawal of militants and the start of the return of convoys of displaced people.

Perhaps this is the real test of the new Baghdad-Erbil agreement and its ability to overcome the devil that lies in the details.