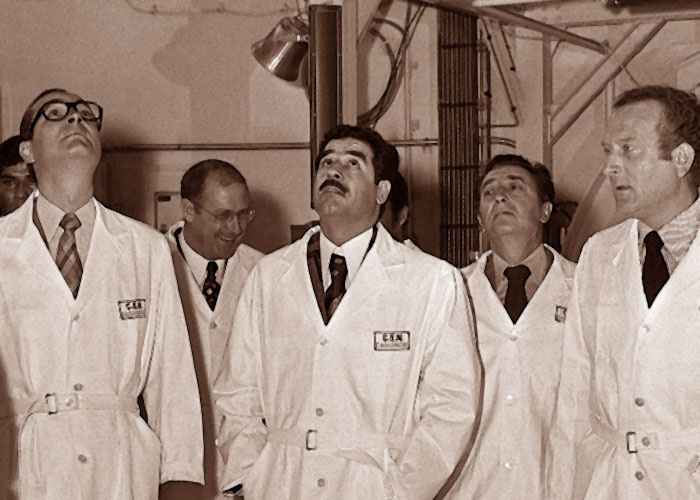 Shafaq News / The IDF Archive on Tuesday published a host of documents related to the bombing of Iraq’s Osirak nuclear reactor 40 years ago, including sketches of the site and a 2001 clip, in which fighter pilot and doomed astronaut Ilan Ramon spoke about the inspiration he drew from his Holocaust survivor mother before heading out in an F-16A jet.

The rare documents were published as part of a digitization project by the IDF Archive to make thousands of hours of video available to the next generations, the Defense Ministry said in a statement.

On June 7, 1981, eight Israeli fighter jets flew 2,000 miles to Iraq and destroyed Saddam Hussein’s Osirak nuclear reactor in Baghdad, before successfully returning back. Less than a day later, the government of then-prime minister Menachem Begin acknowledged that the Israeli Air Force was behind the attack, attempting to prevent an enemy state from obtaining nuclear weapons.

Though condemned internationally, the event has taken on near mythical proportions in Israel, where authorities have slowly lifted the veil off the operation with drips and drabs of new information, usually released around the anniversary of the attack.

The Tuesday release included rough schematics of the Osirak site — which Israel feared Hussein would use for a nuclear weapons program — including a drawing of what the facility would look like from the seat of an approaching fighter jet in a squadron.

The Defense Ministry said the drawings were part of the intelligence file for the operation.

The archive also declassified a partially-redacted post-operational report on the attack, including the written order from the army chief to carry out the strike, the government decision to plan for the operation in 1980, and deliberations over the eventual date of the attack.

“[The operation in] + one week, because of the summit meeting between the prime minister and Sadat in Ophira,” reads a note from army chief Rafael Eitan to air force head David Ivry, after a previous note had settled on May 31 as the day for the operation. The memo refers to a June 4 meeting between prime minister Menachem Begin and Egyptian President Anwar Sadat in Sharm el-Sheikh.

The release also included a (Hebrew) video from Ramon that the Defense Ministry said was recently found during the project to digitize the archival footage.

Ramon, who was added to the mission at the last moment because of his familiarity with the task, after having planned out the maps and fuel ranges, went on to become Israel’s first astronaut and perished in the 2003 Columbia Space Shuttle disaster. He has become a national hero, with schools and other institutions named for him.

In the video, Ramon speaks about how his mother’s experiences in the Holocaust prepared him for the risky mission. The Israeli planes were not thought to have enough fuel to make the return trip, and the military prepared for the possibility that pilots would be shot down or stranded in Iraq.

Ramon says one day after being shouted at in traffic, he started wondering why he was risking his life “for all those who curse at me and spit on me on the road here?”

“But then I remembered my origin — my mother, Auschwitz, what the Jewish nation has suffered through — and I said, ‘The hell with it,’ this cannot repeat itself, and if I need to stay there, I’ll stay there. And that is what helped me go on that mission.

“I think we here in Israel are so focused on our own quagmire, that we frequently forget what we have this country for, and perhaps I was given the honor of being part of something that is so important to the entire Jewish people, like this operation we’re talking about,” he says.

The video was recorded during a 20-year reunion at the home of Yiftach Spektor, who had also taken part in the attack.

Ramon, who was in the last plane in the convoy, worried about being likeliest to be shot down, Col. (Ret.) Ze’ev Raz said in an interview published in 2016.

“Everyone knows the last one is the one that risks the most,” Raz said at the time. “It’s like a herd of antelopes being chased by a tiger. The guys made fun of [Ramon], saying he’d be the one who would be intercepted. So he was stressed… He also had no experience [Ramon had never before launched a bomb on a live mission] but he operated very well and he hit his target.”

In the video, Ramon also shared the content of a letter he received from a Holocaust survivor, who suggested that he take into space a doll that his 7-year-old daughter had made out of a dirty towel before she was sent to Auschwitz, and which had been sprinkled with her ashes.

“Mr. Ilan, since you will be close to the heavens, open the heavens and let the heavens apologize for why they didn’t respond to our cries,” the letter said, according to Ramon.

In the end, he took a copy of a drawing of earth from space by a 14-year-old boy who perished in the Nazi death camp, a miniature Torah given to him by a Holocaust survivor, and a barbed wire mezuzah donated by a group of survivors.

He and six other crewmembers aboard died when the shuttle broke up upon re-entry in 2003.

Source: The Times of Israel

Iraq announces its position from the "historic" agreement in Sudan

In Iraq’s richest province.. Experts and engineers pack to leave

The Minister of interior arrives to Kurdistan

Six years after the genocide they were subjected to.. Yazidis are still fighting for life