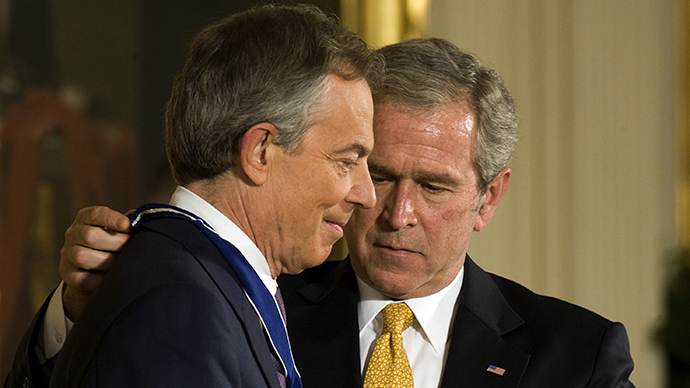 Shafaq News/ George W Bush told Tony Blair he did not know who would replace Saddam Hussein in Iraq when they toppled him and that he “did not much care”, according to an explosive top secret account of the meeting seen by Middle East Eye.

The former US president was blithe about the consequences of launching an invasion at a crucial meeting with the British prime minister at his Texas ranch in 2002, almost a year before the war was launched.

“He didn’t know who would take Saddam’s place if and when we toppled him. But he didn’t much care. He was working on the assumption that anyone would be an improvement,” the British memo, written by Blair's top foreign policy adviser at the time, reads.

Bush believed - but the memo says he would not say publicly - that a “moderate secular regime” in post-Saddam Iraq would have a favourable impact both on Saudi Arabia - a close US ally - and Iran.

He had said it was essential to ensure that acting against Saddam would enhance rather than diminish regional stability. Bush "had therefore reassured the Turks that there was no question of the break-up of Iraq and the emergence of a Kurdish state".

The memo also reveals how as early as April 2002, more than eight months before United Nations weapons inspectors went into Iraq, Blair was aware that they might have to “adjust their approach” should Saddam give them free rein.

This is believed to be the first reference to a strategy which ended with the creation of the infamous “dodgy dossier” of concocted intelligence making the case for war, key details of which were later admitted to be false.

The memo hardens the central findings of the public inquiry into the war led by John Chilcot which concluded in 2016 that the UK chose to join the invasion before peaceful options had been explored, that Blair deliberately exaggerated the threat posed by Saddam, and that Bush ignored advice on post-war planning.

It was written by David Manning, Blair’s top foreign policy adviser, one day after the meeting at the president’s ranch in Crawford, Texas, on Saturday 6 April 2002.

Apart from Bush and Blair, only a handful of officials were present from both sides, and much of the discussion between the two leaders was conducted one-on-one.

The president and prime minister had developed a particularly close relationship in the aftermath of the 11 September 2001 al-Qaeda attacks in the US, following which Blair had pledged to "stand shoulder to shoulder with our American friends". The two trusted and confided in each other more than they did some of their own colleagues.

The UK had been a key supporter and participant in the US-led invasion of Afghanistan in October 2001. Iraq, which had long been subject to UN sanctions imposed over Saddam Hussein's weapons programmes, had also been in US sights since the launch of the so-called "war on terror".

In another memo sent to Blair weeks before the Crawford meeting, Manning reported that Condoleezza Rice, Bush's national security adviser, had told him over dinner that Bush really needed Blair's support and advice, angered as he was at the reaction he was getting in Europe.

At the time, the plan to launch a war was a closely guarded secret even within senior US military circles. Manning notes that only a “very small cell” in US Central Command (Centcom) was involved in drawing up plans, with most high-ranking military officials kept in the dark.

He wrote: “This letter is exceptionally sensitive and the PM instructed it should be very tightly held, it should be shown only to those with a real need to know and no further copies should be made.”

The memo was addressed to Simon McDonald, foreign secretary Jack Straw’s principal private secretary, and circulated to a handful of other senior British officials.

They were Jonathan Powell, Blair’s chief of staff; Michael Boyce, the chief of defence staff; Peter Watkins, the principal private secretary to defence minister Geoff Hoon; Christopher Meyer, the British ambassador in Washington; and Michael Jay, the permanent secretary at the foreign office.

Rice told the Crawford ranch meeting that “99 percent” of Centcom was unaware of the Iraq war plans.

Manning recounts how Bush and Blair war gamed the issue of sending weapons inspectors into Iraq.

Both leaders were concerned about the level of European opposition to military action and the memo notes that Bush accepted that “we need to manage the PR aspect of all this with great care”.

“The PM would emphasise to European partners that Saddam was being given an opportunity to co-operate. If, as he expected, Saddam failed to do so, the Europeans would find it very much harder to resist the logic that we must take action to deal with an evil regime that threatens us with its WMD programme.”

Blair was concerned then by the possibility that Saddam would let UN inspectors in and allow them to go about their business - which in fact subsequently happened.

Inspectors returned to the country in November 2002 and remained there until 18 March 2003, one day before the launch of the US-led attack on Iraq.

In February 2003, Hans Blix, the UN's chief inspector, told the Security Council that Iraq appeared to be cooperating with inspections, and said that no weapons of mass destruction had been found.

Blair told Manning after a private conversation with the US president: “Bush had acknowledged that there was just a possibility that Saddam would allow them in and go about their own business. If that happened we would have to adjust our approach accordingly.”

The Manning memo was first leaked to the Daily Mail, amid the public furore over the award of a knighthood to Blair. Middle East Eye has been passed a copy of the text of the memo, which it is publishing in full.

A petition to have Blair’s knighthood rescinded has since gathered more than one million signatures.

The memo is the second written by Manning on Iraq to see the light of day. In 2004, the Daily Telegraph newspaper published details of a memo by the British diplomat to Blair concerning preparations for the Crawford summit.

Dated 13 March 2002, Manning tells Blair of his dinner with Rice and their conclusion that failure “was not an option”.

Manning writes: “It is clear that Bush is grateful for your support and has registered that you are getting flak. I said that you would not budge in your support for regime change but you had to manage a press, a parliament and a public opinion that was very different than anything in the States. And you would not budge either in your insistence that, if we pursued regime change, it must be very carefully done and produce the right result. Failure was not an option.”

Manning told Blair that the issue of weapons inspections “must be handled in a way that would persuade European and wider opinion that the US was conscious of the... insistence of many countries for a legal basis.”

On the visit itself, Blair was told that Bush would want to pick his brains. “He also wants your support. He is still smarting from the comments by other European leaders on his Iraq policy.”

Blair received a number of warnings from top advisers just before the summit. Peter Ricketts, the British government’s national security adviser, wrote to Blair that scrambling to establish a link between Iraq and al-Qaeda was “so far frankly unconvincing”.

Even if they successfully made the case that the threat posed by Iraq ought to be taken seriously because of the country’s use of chemical weapons in its 1980s war against Iran, “we are still left with a problem of bringing public opinion to accept the imminence of a threat from Iraq. This is something the prime minister and president need to have a frank discussion about”.

Straw, then foreign secretary, wrote to Blair on 25 March 2002 that the rewards of Crawford would be few and the risks high.

He warned of "two legal elephant traps". Straw wrote that regime change in Iraq per se was no justification for military action, noting “it could form part of the method of any strategy, but not a goal”.

The second was whether any military action would require a fresh mandate from the UN Security Council.

“The US are likely to oppose any idea of a fresh mandate. On the other side, the weight of legal advice here is that a fresh mandate may well be required," Straw wrote.

"Whilst that is very unlikely, given the US's position, a draft resolution against military action with 13 in favour (or handsitting) and two vetoes against could play very badly here.”

'Closest to the horse's mouth'

The Manning memo did surface during the Iraq inquiry, but was never published and only obliquely referred to by Roderic Lyne, a member of the inquiry panel, when Manning gave evidence in 2010.

Addressing Manning, Lyne said: "You were obviously the closest person to the horse’s mouth on this one.”

Lyne went on to ask Manning whether Crawford was a decision point for Blair. Manning replied that he thought at Crawford that US thinking had "gone up a gear".

Bush had created a team and asked them to give him options and a British official was later invited to Centcom's headquarters in Tampa, Florida, to see what those options were, he said.

When contacted for comment, a spokesperson for Manning told MEE: "Sir David would like to reiterate that in all correspondence relating to this period he has nothing to add to the evidence he gave to the Chilcot Inquiry.”

MEE has also approached Bush and Blair for comment.

Imperfect allies and non-state actors: Lessons from the 1991 no-fly zone in Iraq