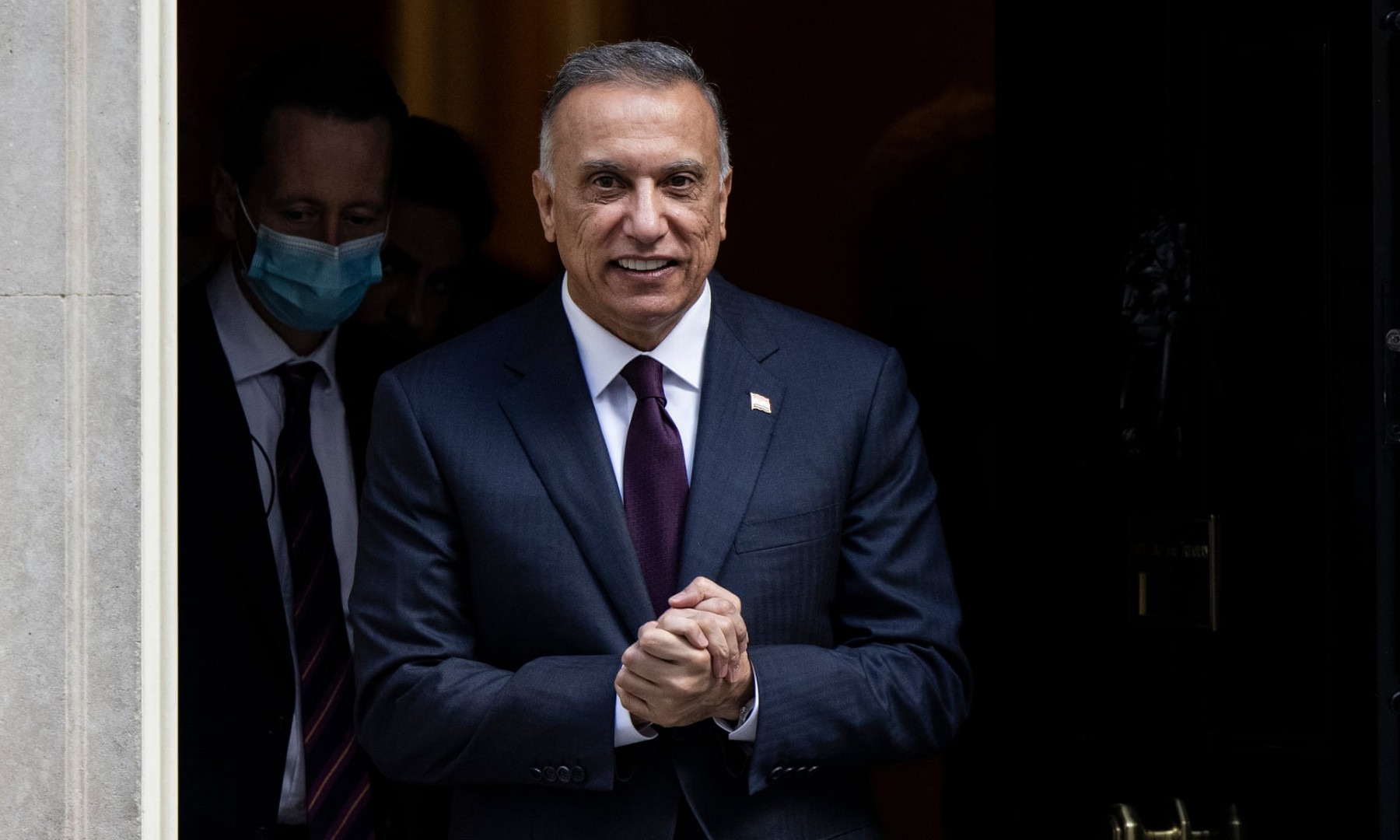 Shafaq News/ Iraq’s prime minister, Mustafa al-Kadhimi, has warned that he is being forced into an impossible balancing act between the US and Iran, as he urged Europe to come to the aid of his country’s debt-ridden economy.

The Guardian published today Friday an article about Iraq’s confusion of playing a balanced role between Washington and Tehran.

“Appointed as prime minister in June, Al-Kadhimi – a British citizen and former journalist – came to power after unprecedented street protests over corruption, and has since governed with a simple program of early elections, better security and preventing the collapse of his oil-dependent economy.

Since taking office he has slowly been making changes to personnel in some security and economic institutions.”

In a press briefing after meeting the UK prime minister, Boris Johnson, he vowed that elections in Iraq would go ahead on 6 June, promising that “the election date is indisputable and we are committed to it”.

Al-Kadhimi has been accused by some of moving too cautiously, but he told reporters that patience was better than being dragged into bloody chaos and civil war. “1,000 years of discussion is better than one moment of exchange of fire”. The Guardian stated.

He is trying to walk a middle ground between the US and Iran, the two countries jostling for influence inside Iraq. He said: “I am on a rope between two tall buildings. I am not required to walk on the rope, but to ride a bike on the rope. I dance on a daily basis with the snakes but I am looking for a flute to control the snakes.”

The newspaper said that Iraq fears of becoming the scene of a military confrontation between the US and Iran ahead of the US presidential election grew when Washington, slowly reduced its 5,000 troops in Iraq, threatening last month to shut its embassy unless the Iraqi government reined in Iran-aligned militias.

But the militias promised to hold a ceasefire if a timetable emerges for the US troop withdrawal.

Al-Kadhimi said after the US elections he would face delicate negotiations over further withdrawals of US troops and the terms on which they would be redeployed. “Everyone is seeking an opportunity for dialogue,” he said. “We are seeking an opportunity to go beyond this sensitive issue and its implications, whoever is in the White House.” But he added the Islamic State still represented a daily threat to Iraq. it added.

At the same time he vowed to bring the Iran-backed militia under control telling reporters “any weapon outside the control of the state will not be allowed”.

On Saturday the central Baghdad offices of the Kurdistan Democratic Party were burnt down by loyalists of the Iran-backed Popular Mobilization Forces (PMF). At least eight citizens in Saladin Governorate were also just shot allegedly by a pro-Iran militia.

It remains to be seen if his security forces can bring militia such as Asa’ib Ahl Al-Haq and under control, or whether the transfer to state control will be nominal.

He insisted it was lack of jobs, poor health services and corruption that drove these young people to militancy, adding other countries such as Colombia had found a path to demobilize militant groups.

The Guardian explained, Since coming to power, Al-Kadhimi has published a white paper on dramatic economic reforms that would see a public sector payroll cut from 25% to 12.5% of GDP. He added the country’s political class had grown lazy through its reliance on oil.

In a tour of France, Germany and the UK, he touted the white paper as a signal to overseas investors that he has a serious three- to five-year plan to wean the country off its excessive dependence on oil for state revenues.

Al-Kadhimi is expected to stand in the elections that he hopes could produce a majority for his reform package.