Iraq's 100th anniversary: A century of coups and transformations 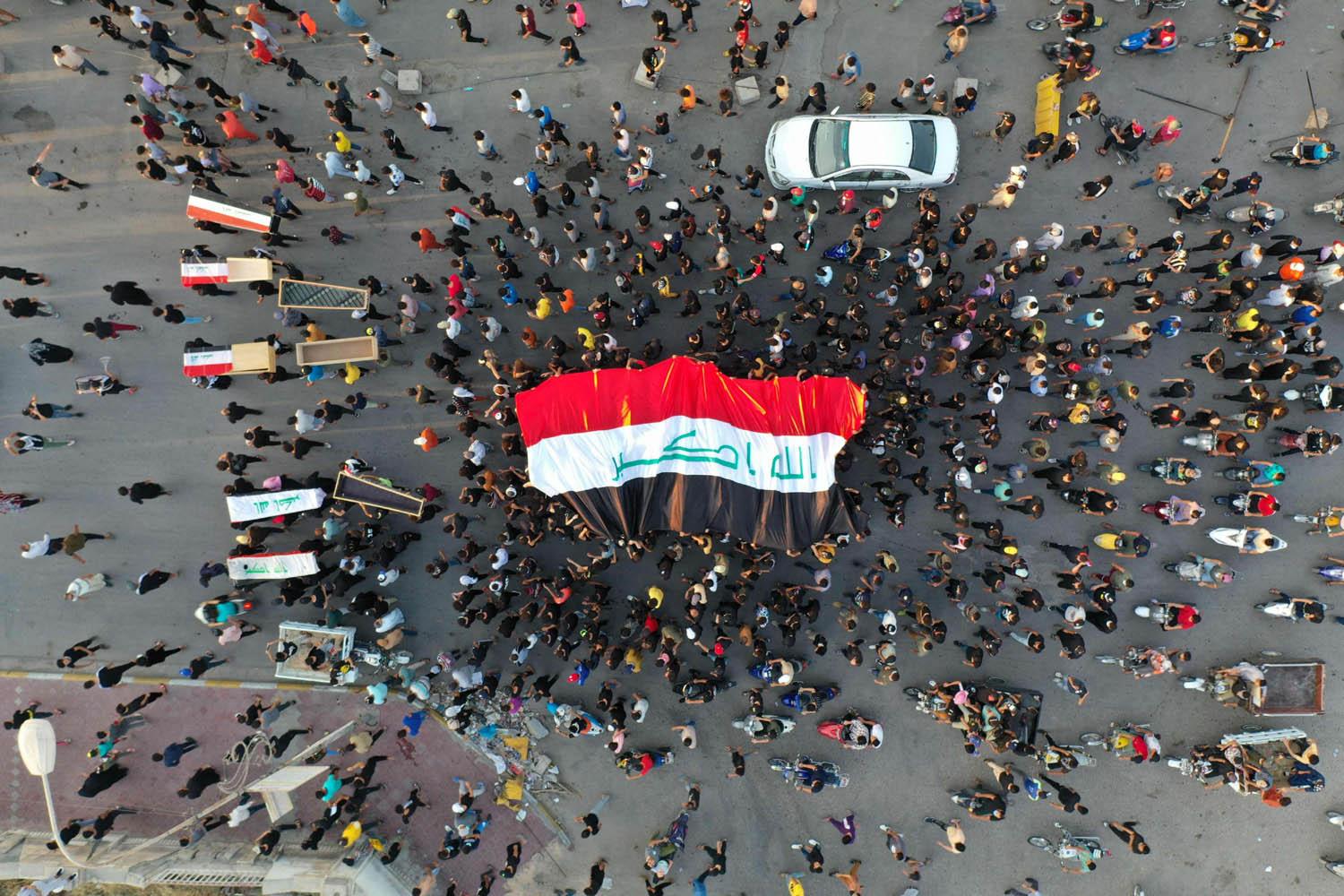 Shafaq News/ The 100th anniversary of the modern Iraqi state is an occasion to remember all the transformations and storms that the state went through to make it what it is today and repeat the endless questions about whether Iraq could be stronger and more prosperous than it is today.

Iraqis and historians agree that, in Mesopotamia, the Iraqi State has taken many forms over the past centuries, and is deeply rooted in the history of humanity, starting from the Sumerian, Akkadian, Babylonian, and not ending with the Assyrian, which has flourished and is known for its impact on human heritage in science, laws, agriculture, industry, and others.

The 100th anniversary of the state is linked to the date of Faisal I's inauguration as king of Iraq, even though the modern Iraqi entity began to shape years earlier under the British mandate. It was obvious as the beginning of a state that followed the monarchies, then left-wing, nationalist, Baathist Republicans, to the abyss that brought the country to a series of policies and decisions, including the military and political "suicide" of the 1990 invasion of Kuwait.

For historians, the establishment of the Iraqi State was linked to two main events, the first being the collapse of the Ottoman Empire and the emergence of Arab "states", including Iraq, from under its control; and secondly, the outbreak of the Iraqi Revolt of 1920, which was considered a pivotal transformation in the lives of Iraqis, because it called for independence and raised arms to achieve its objectives of emerging from the British Mandate.

The Iraqi Revolt of 1920 was characterized by the fact that it covered all the Iraqi regions. In the revolution, all the Sunni, Shiite, Kurdish, tribes, and other Iraqi segments participated in it, and is, just like Prime Minister Mustafa al-Kadhimi mentioned in June last year, the first liberal revolution in the history of modern Iraq.

The revolution killed hundreds of British army soldiers, and the London government came under pressure from British newspapers, which were either critical of the failure of the Administration of the Iraqi colony or demanded an end to the British military role.

Therefore, it is impossible to talk about the establishment of the modern Iraqi state without recognizing the great role played by this revolution in all Iraqis' conscience and their aspirations for their hoped-for "state". It was a national response from Iraqis rejecting external interference in managing their affairs, namely British rule, British arbitrariness in dealing with Iraqis, whether through taxation or ill-treatment of their symbols and leaders.

The British government was forced to hold a conference in Cairo in 1921, the year after the revolution, which was suppressed by its forces and believed to have killed more than 10,000 Iraqis.

The conference, chaired by so-called British Colonial Minister Winston Churchill, who later became prime minister, was held with the participation of senior British officials associated with the administration of The Arab regions occupied by Britain on the ruins of the Ottoman Empire, including Iraq, during which they agreed to appoint Prince Faisal bin Hussein as king of Iraq.

On August 23, 1921, Faisal Bin Hussein was inaugurated as king and remained on chair until 1933, after contributing to the so-called Great Arab Revolution against the Ottomans and entering Damascus in 1918. The Brits endorsed him as a king for being one of Sharif Hussein's sons, who led the Arab revolution, to calm the tension in the Iraqi street from the British presence after the "Iraqi Revolt of 1920".

King Faisal laid the early foundations of the new state, by imposing conscription, drafting a constitution, forming a council of the nation, and making efforts to strengthen the agriculture, education, industry, and electricity sectors.

In any case, Iraqi independence from the British mandate was achieved only in 1932, when it was recognized as an independent state in the League of Nations.

The situation did not change after the independence as the external forces' aspirations in Iraq, the ones that made its history-infested civilizations fall, were the same.

Iraq's geographical location has been a key factor in the renaissance of Iraqi states and kingdoms, a natural meeting point between three continents, Asia, Europe, and Africa, and is, therefore, a meeting point between the roads of land trade convoys, from the Mediterranean, the Indian Ocean, and India, to the Far East, and through the gulf and Indian Ocean's sea crossings as well.

King Ghazi I was crowned after the suspicious death of King Faisal in Switzerland.

He was a fierce opponent to British influence and continued to rule until his early death in a suspicious car accident in 1939.

The monarchy remained in a transitional period until Faisal II reached the legal age in 1953, but did not last long, as the "Revolution of July 14" in 1958, which toppled the monarchy by executing King Faisal II, Crown Prince Abdel Ilah, and Prime Minister Nouri al-Saeed, with growing national and Nasserist sentiments in the post-Arab defeat in Palestine, and then the success of the Nasserist revolution in overthrowing the monarchy in Cairo.

Kurdish officers were among those involved in that "revolution" in favor of the Republican system.

Iraq moved into the republican regime after the coup carried out by officers Abdul Karim Qassem, Abdul Salam Aref, and others known as "free officers".

Then, within the republican regime itself, there was a new coup that toppled and executed the first president of the new republic, Abdul Karim Qassem, in 1963, whose most important political mark was the departure of Iraq from what was known back then as the "Baghdad Alliance", which opposed the Nasserist and Arab movement in the region on March 24, 1959.

Ironically, Saddam Hussein was among the unsuccessful participants in the 1959 assassination attempt on Abdul Karim Qassem.

At the time, Iraq has been competing with Syria in the number of coups and coup attempts, which Abdul Karim Qassem managed to suppress most of them.

To complete Iraq's strange paradoxes, the Baathists were among the forces that subsequently toppled Abdul Karim Qassem, whose rule is credited with introducing several political, social, and economic reforms in Iraq.

As for the relations with the Kurds, Qassem is credited with halting legal proceedings against Kurdish activists who were being prosecuted for their roles in the Kurdish uprisings against the monarchy. Also, the interim constitution adopted by Qassem recognized many of the rights of the Kurds.

Internal and external elements and conflicts overlapped and contributed to the overthrow and execution of Abdul Karim Qassem after a show trial on February 9, 1963, and a coup d'état that included the execution of many supporters of communism.

The Arab Socialist Baath Party carried out the coup plot against Qassem, in cooperation with the nationalist movement, civilian, and military figures, and the putschists immediately chose Abdul Salam Aref as president by decision of the so-called National Revolutionary Command Council.

He also developed Baghdad's relations with its Arab surroundings in general, as well as with the Western world, and maintained personal ties with Egyptian leader Gamal Abdel Nasser at the time.

However, Aref was not enthusiastic about the relation with the Shah of Iran, whose role was central to what was once known as the Baghdad Alliance.

Abdul Salam Aref is said to have tried to save Abdul Karim Qassem from the Baathists' decision to execute him quickly, but he was not responded to, and this, among other reasons, was the beginning of growing discord between Aref and the Baath Party, which executed communists suspected of links to Abdul Karim Qassem. Later, Aref was forced to get rid of Baathist ministers in the government because of their abuse of authority.

Abdul Salam Aref perished in an accident amid questionable circumstances when the helicopter carrying him fell down while on an internal tour in 1966.

His brother, Abdul Rahman Aref, was chosen to take over as the third president of the republic, but the Baathists removed him from power in July 1968 and exiled him to Istanbul.

The Baathists called their coup a "white revolution" carried out by Ahmed Hassan al-Bakr and his deputy Saddam Hussein, who led a new internal coup that got rid of military and political personnel from the previous era, and continued on July 30, 1968, in a movement to get rid of the officers who participated in the coup against Abdul Rahman Aref.

Iraq's paradoxes and lust for power culminate with Saddam Hussein in the position of vice president when he decided in 1979 to become president and the Regional Secretary of the Baath Party and removed Ahmed Hassan al-Bakr from power after he paved the way for his "friendly" coup with a bloody campaign to get rid of all the suspects within the party by executing them immediately.

Saddam came to power in the Baathist state of Iraq, where he became president of the Republic and Regional Secretary of the Arab Baath Socialist Party in 1979 after campaigning to get rid of his opponents within the Baath Party on charges of treason.

Saddam Hussein did not wait long to engage in 1980 with a fierce war with Iran. He then continued with a more absurd war by invading Kuwait in 1990, before plunging Iraq into the phase of international sanctions that ended by the U.S. invasion in 2003.

The history of Iraq later entered a new phase of governance. The Unified Coalition Authority was immediately formed and headed by Paul Bremer in 2003, followed by the formation of the Governing Council in July 2003, the Interim Iraqi Government in 2004, and the Iraqi transitional government.

After the new constitution was ratified on October 15, 2005, general elections were held on December 15, 2005. Nouri al-Maliki was the first head of an elected permanent Iraqi government, followed by several heads of government to the current PM, al-kadhimi.

Now, 100 years after the crowning of Faisal I in Baghdad, Iraq, pursuant to its adopted constitution, has become a federal democratic parliamentary republic in which the prime minister has the highest executive authority.

Battle of Persuasion in Iraq: only 17% are fully vaccinated.. many believe anti-vax propaganda

How Baghdad’s Backyards Are Bringing Back Iraqi Dates

Doubts and accusations.. The Election law sows discord in Iraq