Iran threatens Israel, could confront it from four fronts, Report 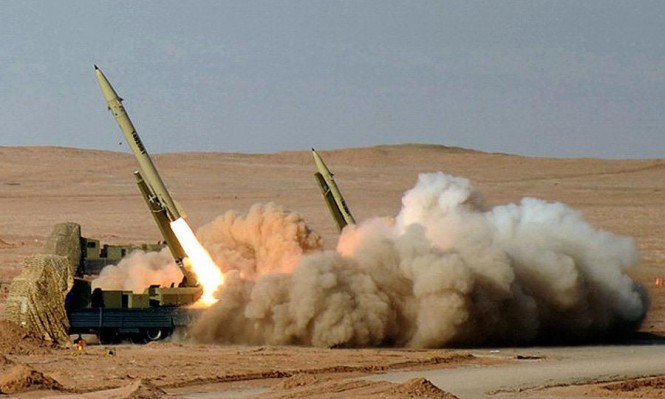 Shafaq News/ If tensions between Israel and the Islamic Republic of Iran deteriorate into an all-out war, the former could face Iran-backed factions attacks from up to four regional countries. Forbes reported.

According to the Website, Iran’s Islamic Revolutionary Guards Corps (IRGC) has established a vast network of increasingly powerful Shiite proxies across the Middle East that does Tehran's bidding.

Iran expert Nader Uskowi said the IRGC’s extraterritorial Quds Force has recruited armed and organized up to 200,000 Shiite fighters across the Middle East.

“In recent years, the IRGC has supplied many of these powerful groups with increasingly accurate and longer-range missiles and rockets. It has also helped several of them develop the capability to locally manufacture these weapons.” It said.

A research paper just published by the International Institute for Strategic Studies (IISS) entitled ‘Missile Multinational: Iran’s New Approach to Missile Proliferation’ evaluates Iran’s evolving strategy for supplying these proxies with missiles. The paper notes that the Quds Force, in cooperation with Iran’s formidable missile industry, “appears intent on enabling all its main proxies to be able to autonomously manufacture artillery rockets and precision-guided missiles.”

“The success of this ‘multinational’ project could have significant security and strategic ramifications for Israel. And, by many accounts, it has already made significant progress in recent years. From its immediate north in Lebanon to as far southeast as Yemen, Israel is seeing the rapid proliferation of ever-deadlier missiles in the hands of Iran’s proxies.” It added.

“In Iraq, where the most powerful armed groups operating under the umbrella of the state-sanctioned Shiite-majority Popular Mobilization Forces (PMF) are controlled by Iran, Tehran has supplied its militia proxies with more advanced rockets and, more recently, even armed drones. “ Forbes said.

“In 2018, the IRGC transferred a small number of short-range ballistic missiles (SRBM) to these militias as part of a backup plan in the event Iran comes under attack from Israel or the United States. “ it added.

“The Zelzal, Fateh-110 and Zolfaqar missiles in question have ranges of about 200 km to 700 km [approximately 120 to 430 miles], putting Saudi Arabia’s capital Riyadh or the Israeli city of Tel Aviv within striking distance if the weapons were deployed in southern or western Iraq,” Reuters noted in its exclusive 2018 report that revealed this transfer.”

“More significantly, Iran has helped these militias establish factories in Iraq for building more of these missiles. In July 2020, the Iran-backed Iraqi Badr Organization unveiled locally-built rockets which are roughly comparable to Iranian Naze’at and Zelzal rockets.” Forbes added.

“Successful transfer of the technology, components, and know-how likely makes it more difficult to prevent the proliferation of such surface-to-surface missiles in these militia’s arsenals.”

“A growing arsenal of SRBMs in Iraq could potentially threaten Israel in the event of a region-wide Iran-Israel war in the future, as could long-range drones.” Forbes said.

In Lebanon, there is Iran’s most successful proxy, Hezbollah.

“Both Israel and Hezbollah have avoided another major escalation since that last war (in 2006). In the intervening 15 years, Iran has helped Hezbollah build up an enormous arsenal of missiles and rockets in Lebanon.”

“In the 2006 war, Hezbollah rockets were imprecise and short-range, used to harass and terrorize towns and cities in northern Israel. Today, however, the group has amassed an enormous arsenal of longer-range missiles and rockets that number over 100,000, many of which have the range to strike any part of Israel.

As part of its Precision Project, the IRGC has helped Hezbollah build missile production plants in Lebanon to help it improve the accuracy and range of its arsenal. “ Forbes said.

In the event of a Third Lebanon War between Israel and Hezbollah, the latter’s missile arsenal has become so large over the past 15 years that, according to veteran Hezbollah expert Nicholas Blanford, it could afflict “the greatest destruction and loss of life” on the Israeli home front since its bloody 1948 War of Independence. Lebanon, however, would be turned “in to a car park.”

The third country is Syria, Since the early years of the Syrian conflict, the IAF has maintained an air campaign across Syria primarily to prevent the IRGC from transferring advanced missiles to Hezbollah in Lebanon. In 2020 alone, the IAF conducted at least 500 airstrikes across Syria. During the same period, Syria reacted by firing approximately 900 air defense missiles, a truly “unprecedented number.”

Intelligence sources cited by Reuters in April revealed that Israel has “dramatically expanded” its air campaign across Syria against a suspected Iranian project to establish missile production facilities in that country too. According to these sources, “Iran is moving parts of its advanced missile and arms industry into pre-existing underground compounds to develop a sophisticated arsenal within range of Israeli population centers.”

The report also noted that for Tehran, developing accurate missiles “under cover in Syria is seen as less vulnerable to Israeli attack than ferrying them in overland or by air from Iran.”

“Iran’s current efforts to give its proxies in Syria the means to locally assemble missiles capable of threatening Israel are consistent with the goals of its Precision Project in Lebanon as well as other similar projects in both Iraq and Yemen.” It said

Then there is Yemen. The Houthis in that war-torn country have repeatedly targeted neighboring Saudi Arabia with increasingly more deadly and sophisticated ballistic missiles and drones.

By several accounts, technical assistance and the supply of components from Iran has given the Houthis the ability to manufacture such weapons locally.

In January, a U.N. Security Council report stated that: “An increasing body of evidence suggests that individuals or entities in the Islamic Republic of Iran supply significant volumes of weapons and components to the Houthis.”

“As with Hezbollah and Iraqi factions missiles, the accuracy and range of these weapons are exponentially growing and could soon pose a threat to Israel.” It said.

Veteran military analyst Michael Knights, who assiduously detailed the Houthi drone and missile capabilities in an April report for the Washington Institute, warned that an even longer-range potential Burkan-4 missile could soon threaten Israel.

All of these developments are a striking reminder of how an Iran-Israel war could quickly become a hugely destructive conflagration engulfing several countries to an extent that is unprecedented even for this infamously volatile region.

The Hill: Iran-linked drones are one more reason to end the war in Iraq

Report: Iran and Iraq share the responsibility for the Attacks on the Global Coalition

Is Iran worried about an 'Arab-Israel' defensive alliance? - Israeli analysis