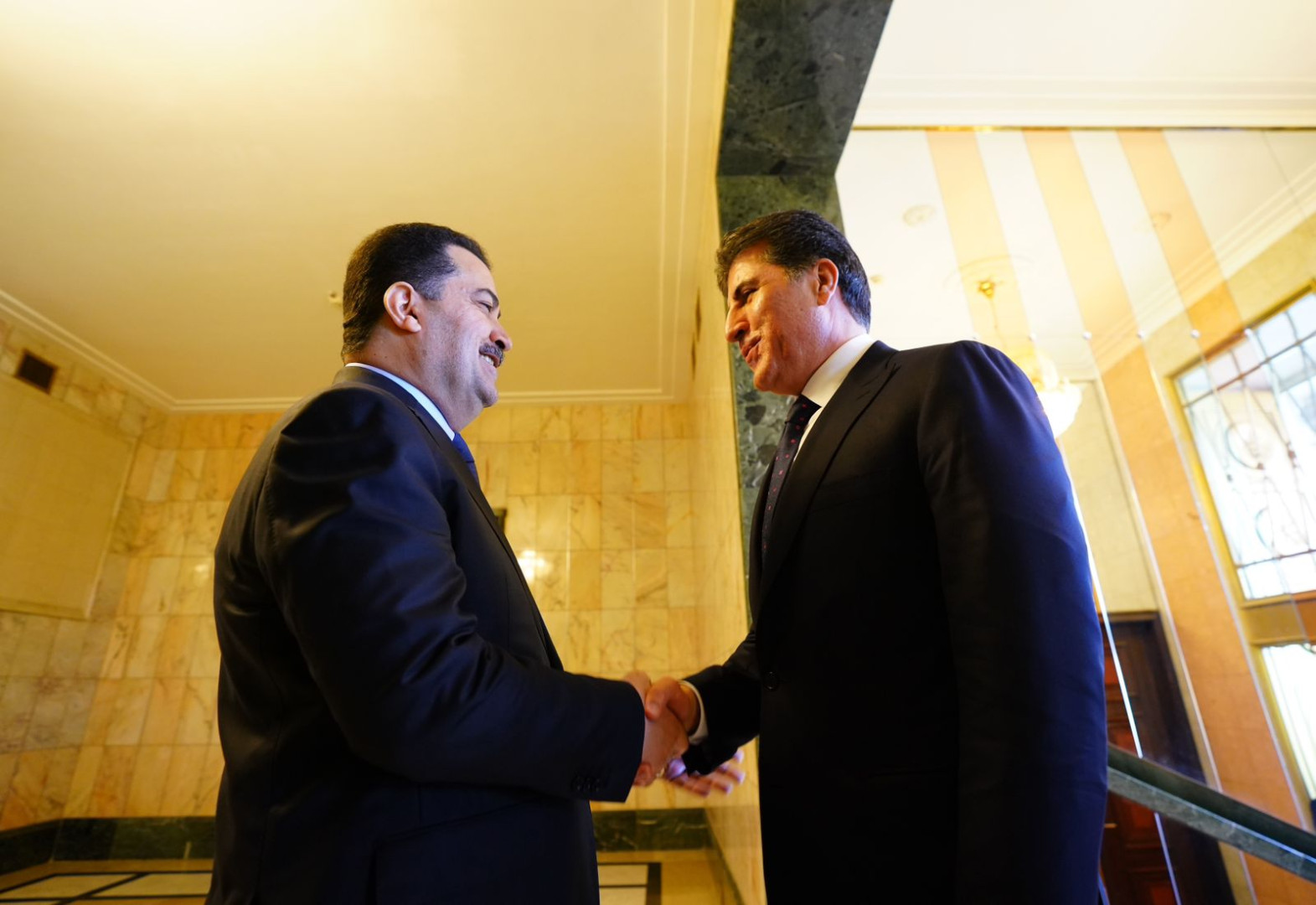 Shafaq News / This is not the first time the President of the Kurdistan Region, Nechirvan Barzani, has visited Baghdad. However, this time's visit comes after a new Iraqi government was formed following the worst political deadlock in Iraq.

According to observers, the visit was necessary due to the dismantling of Baghdad's political crisis, not only because Nechirvan Barzani has good relations with political players in the Iraqi capital, but also because he, along with the leader of the Kurdistan Democratic Party (K.D.P.), Masoud Barzani, played a significant role in facilitating the breakthrough that came after months of political deadlock.

The "keyword" that was repeated in Nechirvan Barzani's intensive meetings with Iraqi officials, from the prime minister and president of the republic to the head of the judiciary, as well as the leaders of the main political and parliamentary blocs, was apparently "shared responsibility, support for al-Sudani's government and its program.

Nechirvan Barzani stated that Kurdistan views Baghdad as its strategic depth, and because there is no way around their coordination and partnership to overcome challenges and difficulties, it appears that the talks will turn the pages of the long-standing differences between Baghdad and Erbil.

Al-Sudani first formed his cabinet at the behest of the Coordination Framework. Still, it was ultimately the votes of the parties in the framework, the Kurds, including K.D.P. delegates, and the votes of the al-Siyada and Azm alliances that gave him the support he needed to win the confidence.

Nechirvan Barzani has realized that al-Sudani needs all the support he can get in the current political, economic, and security reality, regardless of the parliamentary support he received. His long and busy day in Baghdad is the clearest expression of this vision and options.

Nechirvan Barzani landed in Baghdad, amid the deafening sound of gunfire and missiles coming from the Iranian and Turkish sides, under the guise of confronting gunmen opposed to Ankara and Tehran, which requires action by both the governments of Erbil and Baghdad, to deal with this emerging and sensitive situation due to its regional, Iraqi, and Kurdish complexities.

In addition, the visit comes at a time when the possibility of a large-scale Turkish ground military intervention against P.K.K. positions in Kurdistan and northern Syria is being raised, in addition to the tense internal situation in Iran, which certainly, the leaders of the region are anticipating its possible repercussions.

Moreover, al-Sudani's assumption of official duties presents Erbil and Baghdad with a fresh opportunity to improve communication regarding a variety of files and accumulated issues, such as the Kurdistan Region's share in the budget law and the oil agreement, as well as military-security cooperation, particularly in the so-called "disputed" areas and the terrorist hotspots.

The visit also comes at a time when oil sales, whether in the region or Iraq, have achieved exceptional financial incomes compared to previous years. So it is certainly an opportunity for Barzani to urge cooperation with officials in Baghdad, in order to transfer these resources to what serves the interests of Iraqis in general, and the region in particular, after roughly three years of popular protests over the deterioration of services and living conditions.

Nechirvan Barzani began his mission in Baghdad by meeting with PM al-Sudani, who emphasized the commitment of the federal government to the Iraqi constitution to address the outstanding files with Kurdistan's Regional Government. He also stressed the significance of unifying positions at the national level, and the need for solidarity and coordination to face the economic, living, and service challenges to secure a decent life for all citizens throughout Iraq.

The President met with the head of the Supreme Judiciary council Faiq Zaidan, President Abdul Latif Rashid, the leader of the State of Law Coalition Nouri al-Maliki, the leader of al-Fatah alliance Hadi al-Amiri, the Secretary-General of Asa'ib Ahl al-Haq Qais al-Khazali, the head of al-Hashd al-Shaabi (Popular Mobilization Forces-P.M.F.) authority Faleh al-Fayyad, the head of al-Nasr Alliance Haider al-Abadi, and with al-Siyada alliance, represented by Muhammad Tamim, Minister of Planning in the federal government.

The salient points raised by Barzani during those meetings can be summarized as follows:

- Cooperation between the Iraqi authorities, political forces, and components to face challenges

- Relations with neighboring countries, which must be built based on mutual respect and common interests

- The importance of coordination and cooperation between all security forces, Peshmerga, and the army

- "Shared responsibility" and resolution of disputes between K.R.G. and the Federal Government

- There is a historic chance of success if political stability continues, and there is no way for Iraqis to succeed but through understanding

- Baghdad is the strategic depth of the Kurdistan Region

- Obstacles to government action and the war on terrorism

- The threats and dangers of ISIS, and military coordination, especially in the areas of Article 140, and its complete elimination