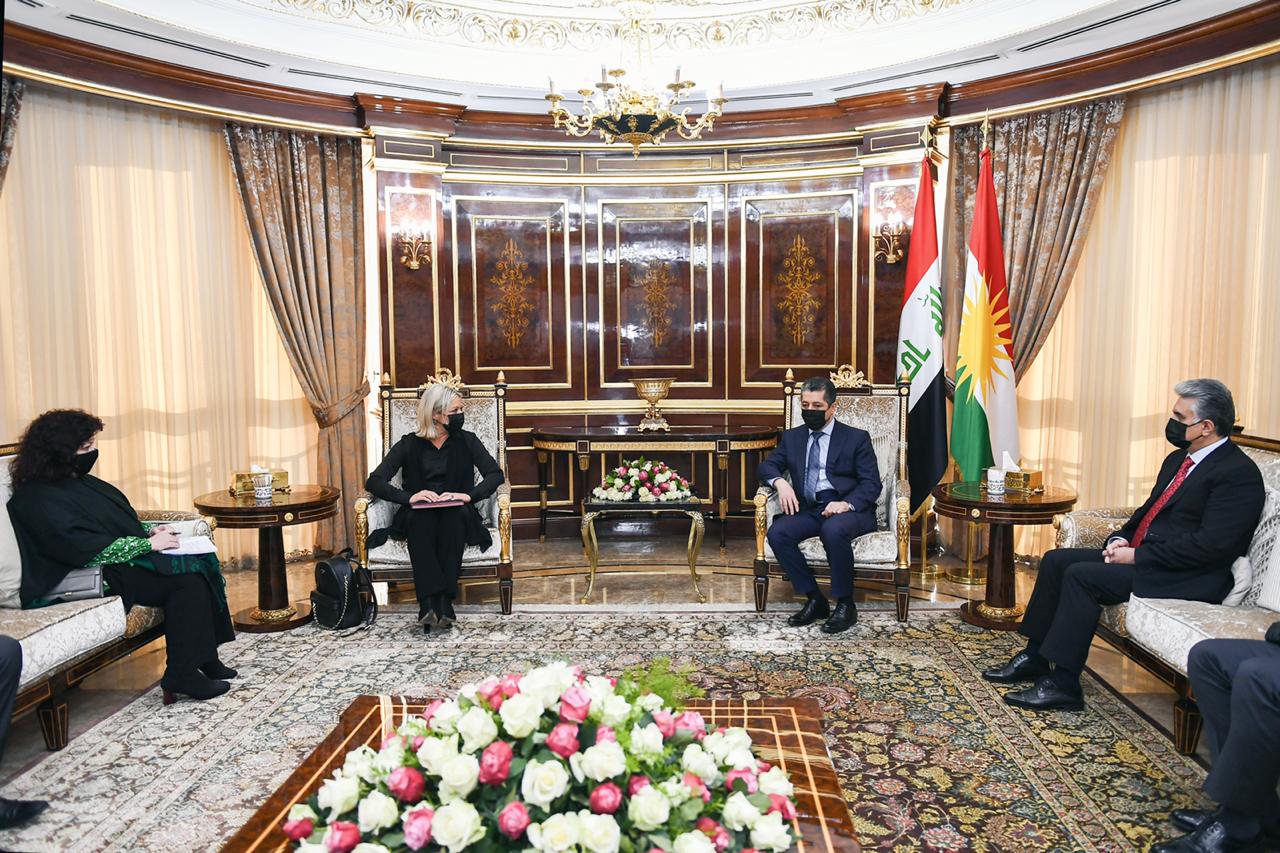 The two parties discussed the situation in Iraq and the latest developments of the negotiations between the Kurdish Government (KRG) and the federal governments, especially the mechanisms for resolving the outstanding problems.

The PM stressed that Baghdad government has no excuses to commit its duties towards Kurdistan, “Unfortunately, the salaries issue is used to pressure the people of the region.”

He emphasized that the federal government has not yet sent the salaries of six months of 2020.

"Therefore, we demand the United Nations to play an effective role to reach an agreement with Baghdad that securing the rights and financial dues of the Kurdistan Region based on the constitution."

On the other hand, a government source said, on Sunday that after 8 hours of discussions the Iraqi Council of Ministers approved more than half of the 2021 budget.

"The Cabinet approved 20 out of 35 items in the draft general budget law."

The draft federal budget bill stated the export price of a barrel of oil at $ 42, at an export rate of 3,250 million barrels, including 250 thousand barrels of crude oil produced in the Kurdistan Region.

So far, no agreement is reached between the federal government and the Region, A deputy of the Patriotic Union of Kurdistan, Rizan Sheikh Dalir, said on Friday.

Sheikh Dalir said in a statement "the federal government concocted all sorts of reasons that don't have a leg to stand on, to make up excuses for not sending the financial dues of the region,” adding, the partisan tension among government representatives in Baghdad also played a role.

The MP emphasized that "suspending Kurdistan’s payments is also due to the lack of cash in the Central Bank of Iraq."

“the region expressed its full readiness to deliver oil imports to SOMO monthly, in addition to solving the problems of border crossings and customs revenues, but still, Baghdad did not responding.” She added.

Earlier, Iraqi president, Barham Salih indicated that securing financial dues is based on the principle of justice to all Iraqi people, without any discrimination.

He also stressed that Baghdad and Erbil Governments should work seriously to reach a comprehensive agreement to solve the financial issues particularly the salaries.

A high-level delegation from the Kurdistan Regional Government headed by Qubad Talabani, Deputy Prime Minister, is currently holding talks in Baghdad to solve the salary crisis and the region's share of the fiscal budget for 2021.

The governments of Iraq and Kurdistan have reached an agreement on Erbil’s contribution to the 2020 federal budget.

The deal includes a transfer of 250,000 barrels per day (bpd) from the oil-producing region to Iraq’s national budget in exchange of securing the financial dues of the region.

However, Kurdistan said that the federal government did not keep their promise of sending the all financial duties to the region.

The KRG was forced to cut public workers’ salaries for several months as the region grapples with an economic crisis brought to a head by plummeting oil prices.

A letter from Kurdistan to Al-Kadhimi