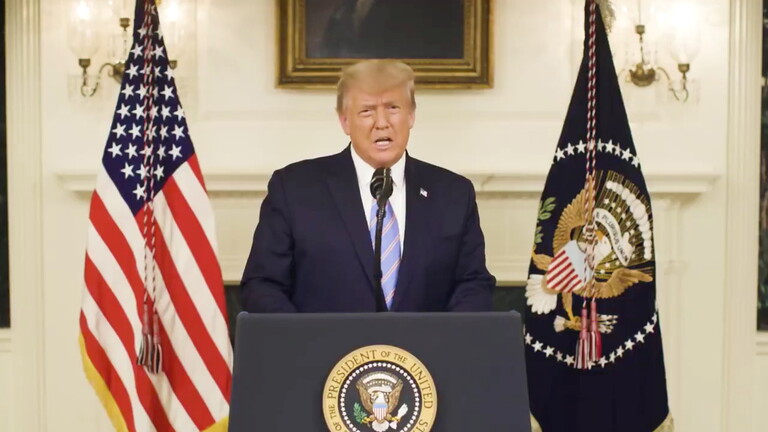 Shafaq News/ Nine in 10 Americans oppose the Jan. 6 attack on the U.S. Capitol, seven in 10 say Donald Trump bears at least some responsibility for it and a majority in a new ABC News/Washington Post poll – 56% – favors efforts in Congress to bar him from holding elected office again.

Fifty-four percent in the national survey also say Trump should be charged criminally with inciting a riot for having encouraged his supporters to march on the Capitol. More, 66%, say he has behaved irresponsibly, more broadly, in his statements and actions since the election.

Half the public, 51%, say the events of the past week in Washington, D.C., left them less confident in the stability of democracy in the United States. That said, just 20% are pessimistic about the future of the U.S. system of government, about the average in polling back to the 1970s.

Further, while Trump’s claims of widespread fraud have raised fears he would undermine confidence in U.S. elections, Americans by 2-1, 62-31%, see no solid evidence for these claims. And the public by 63-36% expresses confidence in the electoral system overall. At the same time, confidence in the electoral system dives to 35% among Republicans, and, following their leader’s line, 65% of Republicans say they think there’s solid evidence of fraud.

Looking ahead, Americans by a wide margin say Republican officials should lead the party in a different direction rather than follow Trump’s leadership, 69-26%. But just among Republicans, a majority, 60%, wants to continue to follow Trump -- sharply fewer than in in the past (83% in a similar question in 2018), but still marking the risk of a Trump/no Trump schism within the party.

Indeed, while 52% of all Americans say Republican leaders who supported Trump’s effort to overturn the election “went too far,” just 16% of Republicans say so, compared with 81% of Democrats and 54% of independents. And Trump maintains a 79% job approval rating in his own party, with 64% approving strongly.

The challenge for the Republicans, in what may or not be their post-Trump era, is how to straddle that continued in-party approval for the president with views outside the base. Among the predominant political group, independents -- often swing voters -- approval of Trump plummets to 35%, with 62% disapproving.

Given the sharp differences on most political issues between partisan groups, one result in the survey stands out for its level of agreement: Eighty-nine percent of Americans oppose the actions of the people who stormed the Capitol, including 80% who are strongly opposed. Eight percent are in support, with strong support at 5%.

Support for those who stormed the Capitol reaches 15% among conservatives and Republicans alike, and 19% among people who approve of Trump’s job performance. Still, even among Trump approvers, 76% are opposed, including 60% strongly opposed.

When it comes to the events of the past week, 42% of Republicans think Trump bears at least some responsibility for the attack on the U.S. Capitol; that rises sharply to 72% of independents and 93% of Democrats. Many fewer Republicans, 12%, think Congress should remove Trump from office and disqualify him from holding elected office in the future, vs. nearly six in 10 independents and nine in 10 Democrats.

In terms of Trump’s legacy, three in 10 conservatives and a quarter of Republicans think he’ll go down in history as a below average president. That compares with 60% of independents, 71% of moderates, 86% of liberals and 89% of Democrats.

Whatever Trump’s role in the nation’s political future, the results make clear that his presidency -- and especially the events of last week -- have left deep divisions, not only in political attitudes, but also in views of American democracy. While, as noted, just 20% are outright pessimistic about the U.S. system of government, only 30% are optimistic -- near the low, and well off the average in polls back 46 years, 43%. The plurality, 48%, is uncertain.