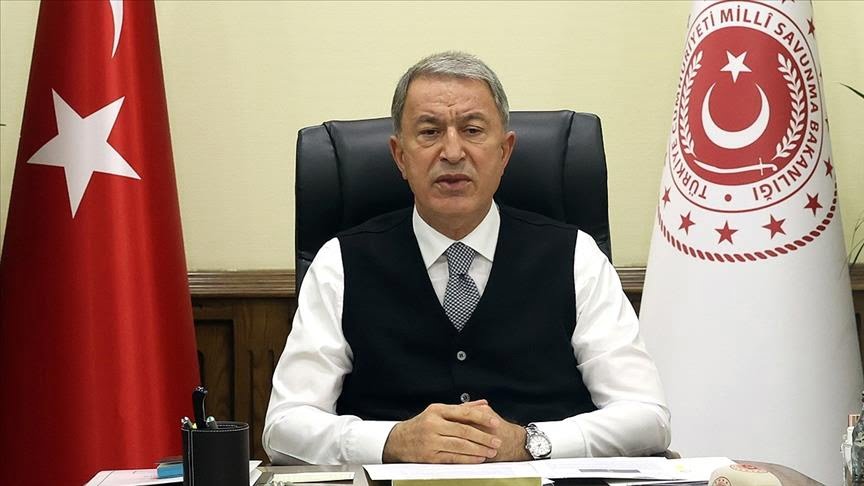 Shafaq News/ Defense Minister Hulusi Akar said that the Defense of a country is wide-ranging and cannot just be carried out through military means.

Speaking at the 13th Ambassadors Conference in Ankara, he said, "There is economic security, there is the cultural economy, and there's cultural security."

Addressing the Turkish envoys, Akar said Türkiye aims to protect its borders from terrorist organizations via its cross-border operations, and "we have no interest in anyone's land."

Recalling Türkiye's agreements with Russia and the US on eliminating terrorists from northern Syria, Akar said: "Although we have undertaken and fulfilled all responsibilities on our part, our interlocutors have failed to fulfill the promises."

Commenting on the landmark grain export deal brokered by Türkiye and the UN, Akar said Ankara expects the agreement continues to be implemented without interruptions.

"The current deal is on exporting grain from Ukrainian ports, but talks are ongoing for Russian ports," he added.

On relations with Athens, Akar said despite Greece's moves against Türkiye, Ankara maintains calls for dialogue and negotiation.

Regarding NATO, the defense chief said his country fulfills its duties at NATO in full and expects the same from the 30-member military alliance.

The Turkish minister also talked about the F-16 deal with Washington, stressing that reports coming from the US claim prerequisites given by Congress might be amended in the Senate.

Concerning the operations in Kurdistan Region, Hulusi said, he explained that the armed forces' foreign operations aim to combat terrorism, secure the country's borders and protect its citizens from terrorist attacks.

Concerning the fight against PKK terrorists in northern Iraq, Akar confirmed that the Turkish forces target terrorist elements in that region only, indicating that the Kurds are brothers of the Turks.