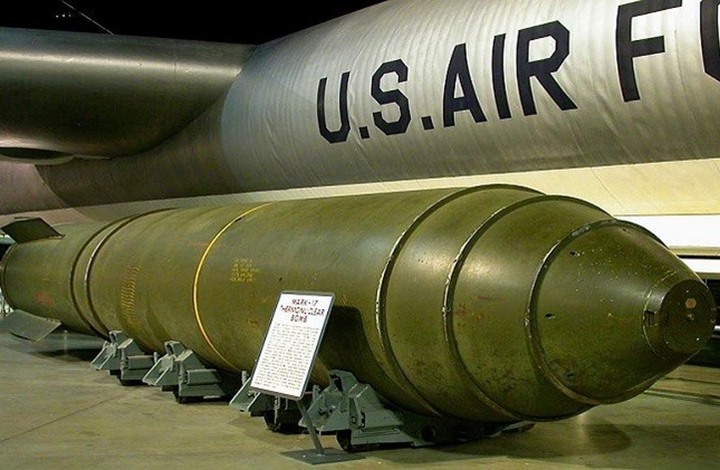 Shafaq News/ As tension between Russia and Ukraine continue and persist, and as the Biden administration contemplates American responses, nuclear weapons lurk in the background.

The nuclear option is postured to deter aggression, even in Europe, a fact made clear by a large-scale "Global Lightning" military exercise last year, which was based upon a possible Russian invasion of the Baltic states, a scenario that ultimately escalated to the use of nuclear weapons.

This year—this week—Global Lightning is back. The exercise is one of a handful of regular war games held by the U.S. Strategic Command, the American nuclear command in Omaha, Nebraska. No one planned for the five-day exercise to come up in the calendar at this inopportune time, and this year the scenario involves China. Still, behind the scenes, here's what Russia sees (even if we see nothing): decision-makers focused on the latest plan, nuclear command and control circuits opened and tested, new innovations and capabilities incorporated and practiced.

Hans M. Kristensen, the director of the Nuclear Information Project for the Federation of American Scientists, sends along a copy of the cover page for the latest iteration of the war plan, updated to take into consideration the major shift underway in the Pentagon to refocus from the war on terror to "great power competition." Kristensen's document—released to FAS under the Freedom of Information Act – confirms that the newest war plan "STRATCOM CONPLAN 0810-12, 'Strategic Deterrence and Force Deployment', Change 1, was issued on April 30, 2019.

Very little is known about the details of the new war plan, nor what specifically Global Lightning practices this year. Kristensen says that the exercise: "includes practicing operations during a trans-/post-attack nuclear environment, including reconstitution, redirection and targeting of STRATCOM forces." In English, that means not just the initial use of nuclear weapons but the unfortunate assumption of repeated use ("trans attack") and then reconstitution of capabilities ("post attack") to use surviving weapons again. It's good old fashioned nuclear warfighting, just updated for new capabilities which in theory give the United States more means to survive.

A STRATCOM spokesperson says this: "As a command post exercise, GLOBAL LIGHTNING focuses primarily on the headquarters processes and procedures necessary to plan and respond to a military crisis. There is no associated field training portion of Global Lightning. USSTRATCOM forces, however, remain on watch 24/7 to deter and detect strategic attacks against the U.S. and its allies."

Of course, this paints a somewhat antiseptic picture of what is actually going on, and it glosses over the main innovation in the nuclear war plan over the past two decades: The incorporation of non-nuclear capabilities into the nuclear war plan that allows contingency planners to assume enough capabilities to survive a Russia first strike, to retaliate, to absorb more attacks, retaliate again, and keep on doing the same again and again (the country miraculously okay with all of this). It's a capability that's more provocative than the Mutual Assured Destruction (MAD) trope of the past, and one that receives shocking little attention.

Of the major STRATCOM exercises, Global Lightning is the most heavily focused on the integrated nuclear command, control and communications enterprise. This is the essence of the pretension of survival against a first strike and continued nuclear warfighting. Here the focus is on integrating new command facilities like STRATCOM's own Command and Control Facility (C2F), with other command posts operated by other U.S. military commands and even allied countries worldwide. Airborne command posts like the E4-Bs and E6-Bs, those that will in theory be able to take over if the fixed ones are destroyed, as well as ground mobile command posts (those that move around to avoid nuclear targeting), are the next level of "survivable" American nuclear buttons on the move.

Global Lightning practices how a new generation of "protected communications" fit in to make these plans work. These include the Family of Beyond the Line of Sight terminals (FAB-T), which consists of 37 ground stations and nearly 50 terminals aboard nuclear capable aircraft, airborne command posts, including Air Force One, and post-strike reconnaissance assets (e.g., the U-2) The Air Force has been trying to get FAB-T operational for a decade; it allows the president (or whoever is acting president) to communicate directly with nuclear forces and, importantly, to hear back from those platforms.

Stress testing the FAB-T capability is one of many Global Lightning objectives, because every new communication platform has to operate seamlessly with others. Some of these new pathways and more survivable communications capabilities include the Army's SMART-T (Secure Mobile Anti-Jam Reliable Tactical Terminal) a new Navy very low frequency (VLF) radio, and the upgrade to the Minuteman Minimum Essential Emergency Communications Network Program (MMPU). Just last year, the Air Force also began to install what it calls another, redundant, survivable communication system, the Common Very Low Frequency Receiver, for nuclear operations on B-2 "Spirit" bombers.

Aside from equipment tests, role players during Global Lightning will convene nuclear emergency conference calls from various command posts using the Presidential and National Voice Conferencing system. The PNVC is supposed to work with a bunch of different types of military communication pathways to provide "near toll quality voice conferencing capability for the President, Secretary of Defense, Chairman, Joint Chiefs of Staff and other senior national/military leaders."

The nuclear war plan is hardly just about nuclear weapons anymore. The actual warfighting elements incorporate so many other lethal capabilities that are not nuclear: missile defenses, secret weapons (such as directed energy weapons), long-range conventional weapons, electronic warfare, cyber offense, space attack, even special operations. For more than a decade STRATCOM has been working to incorporate all of these capabilities, both the kinetic and non-kinetic attack pieces, into one overarching plan.