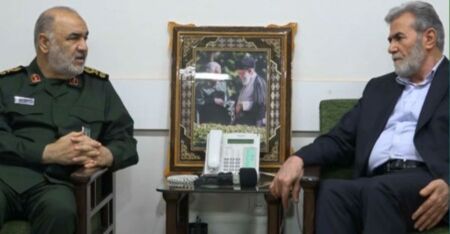 "Israel bil Arabiya," the official account of the Israeli Ministry of Foreign Affairs, tweeted about the visit of the Secretary-General of the Islamic Jihad Movement Ziad al-Nakhala to Iran and his meeting with the commander of the Islamic Revolutionary Guard Corps in Iran, Maj. Gen. Hussein Salami.

"The difference between us: Israel seeks to protect its children from the terrorism promoted by Islamic Jihad, while Islamic Jihad puts the people of Gaza at risk in the service of its masters in Iran, who finance 70% of its budget." Israel bil Arabiya said.

"What good will this meeting bring to the people of Gaza? The Secretary-General of the terrorist Islamic Jihad Organization al-Nakhala in Tehran listens to the instructions of Iran, who are all interested in exporting their revolution to the region after it has so far undermined four Arab countries, Lebanon, Syria, Yemen, and Iraq." The Israeli account added.

Earlier today, The commander of Iran's elite Revolutionary Guards said on Saturday that Israel would pay a high price for its latest attacks on the Palestinians in Gaza, Iranian state TV reported.

"The Israelis will pay yet another heavy price for their recent crime," it quoted Major General Hossein Salami as saying about Israeli air strikes on Gaza as he met with Islamic Jihad leader Ziad al-Nakhala who is currently in Iran.

On Saturday, Israeli aircraft struck Gaza, and Palestinians fired rockets at Israel after an Israeli operation against the Islamic Jihad militant group ended more than a year of relative calm along the border.

Palestine and Israel… Ongoing war and rising number of victims

Qa'ani: Israel launched drills to cover up for two UAV operations inside its territory