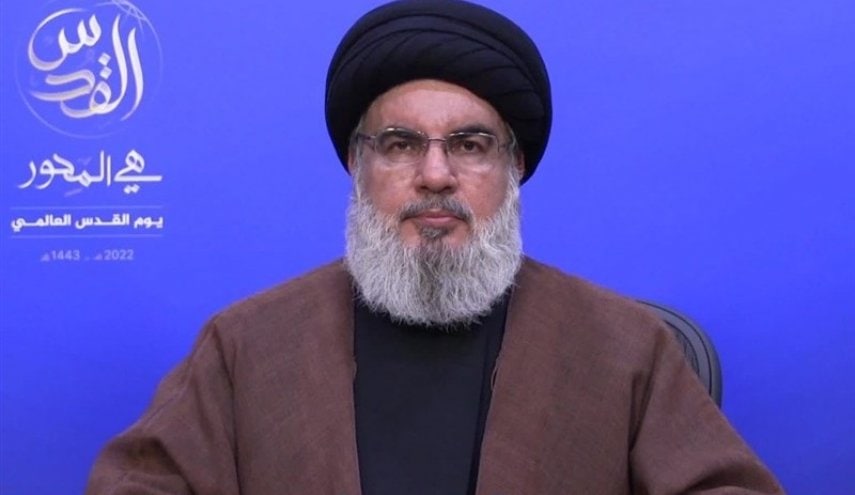 Shafaq News/ Hezbollah Secretary-General Hassan Nasrallah warned Israel against continuing its “aggression against the Iranian presence in the region,” saying Iran may “attack Israel directly, during a video address delivered at a ceremony in Beirut on Friday as Iran and its proxies marked Quds Day.

The address was also one of Nasrallah’s first speeches since a rocket was fired from southern Lebanon into northern Palestine earlier this week. The IDF responded to the rocket fire with over 50 artillery shells toward southern Israel.

The Hezbollah leader referenced the Iranian missile attack on Erbil, Iraq in March, which Iran said it carried out after an alleged Israeli attack on Iran was launched from there, saying that the strike was a message to countries in the region that any attack on Iran from these countries would be responded to with an attack on those countries.

Nasrallah warned that "in the event of the continuation of the Israeli aggression against the Iranian presence in the region" Iran may "attack Israel directly." The statement from Nasrallah comes just two days after an alleged Israeli airstrike targeted sites near Damascus, killing four Syrian soldiers. Such strikes are often conducted against Iranian forces and proxies in Syria.

Nasrallah pushed what he called the "regional equation on Jerusalem" and called on countries in the region to send a message to Israel that "the demise of Jerusalem means the demise of Israel."

The Hezbollah leader also referred to a large exercise the Israeli army is planning in May, saying that Hezbollah is not frightened but is being cautious. Nasrallah added that Hezbollah has been conducting exercises for a number of scenarios in the past few weeks.

"When the Israeli maneuvers begin, whether before the elections in Lebanon or afterward, we will be at the highest levels of alertness and readiness," said Nasrallah. Lebanon is set to hold parliamentary elections on May 15.

Nasrallah warned that "any mistake, stupidity or aggressive act that the Israeli enemy might commit" would receive a "quick and direct" response. "Your major maneuvers do not frighten us and do not prevent us from establishing the deterrence equations that exist in Lebanon."

The Hezbollah leader additionally referenced the terrorist attacks carried out in Beersheba, Bnei Brak, Hadera and Tel Aviv earlier this month and in March, saying that such attacks are "among the most dangerous things the enemy is facing and they are very specific and important."

"The lone operations indicated the level of fragile and weak security and the inability of the security services to discover these Mujahideen (Muslims who engage in jihad) and strongly shook the confidence of the Zionists in their safety and their security services," said Nasrallah.

Nasrallah’s speech comes after weeks of tensions in Jerusalem and multiple days of clashes near the Aqsa compound between the Palestinians and Israeli forces.

As Nasrallah addressed the event in Beirut, hundreds of Hezbollah supporters carried out a demonstration along the Lebanese-Israeli border near Metulla. Israeli troops were present in the area.