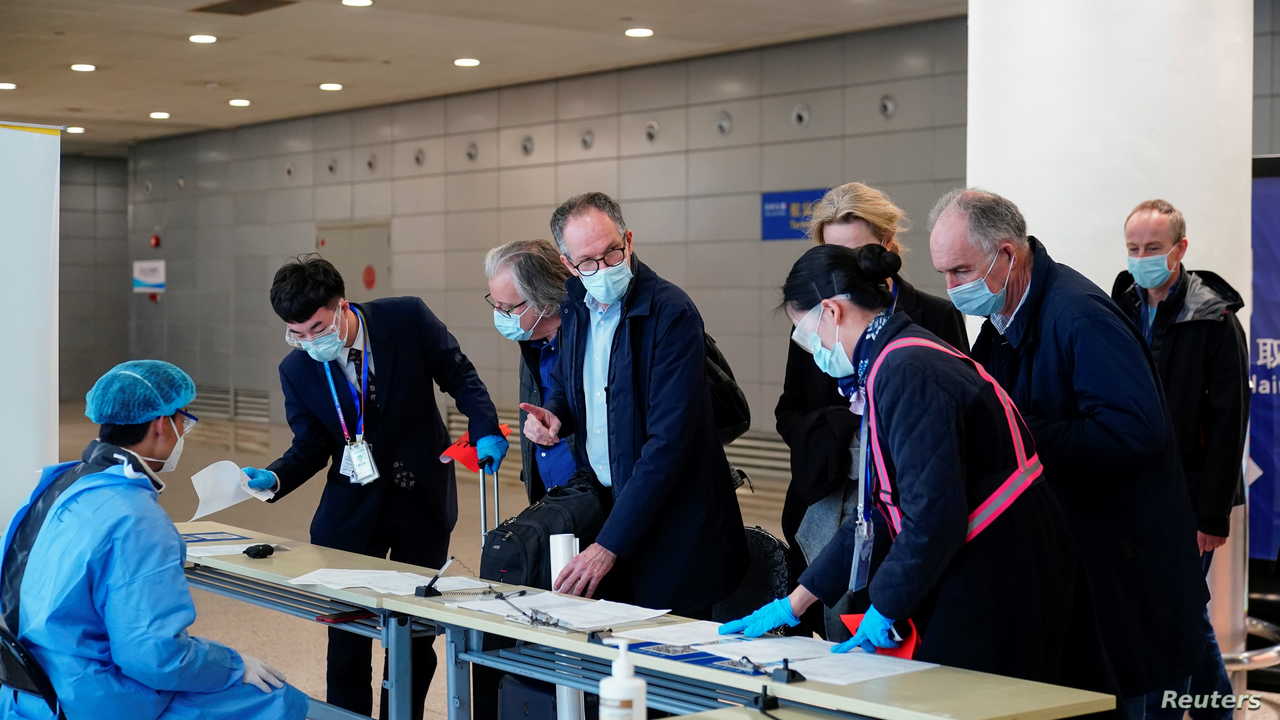 Shafaq News/ Three researchers from China’s Wuhan Institute of Virology became sick enough in November 2019 that they sought hospital care, according to a previously undisclosed U.S. intelligence report that could add weight to growing calls for a fuller probe of whether the Covid-19 virus may have escaped from the laboratory.

The details of the reporting go beyond a State Department fact sheet, issued during the final days of the Trump administration, which said that several researchers at the lab, a center for the study of coronaviruses and other pathogens, became sick in autumn 2019 “with symptoms consistent with both Covid-19 and common seasonal illness.”

The disclosure of the number of researchers, the timing of their illnesses and their hospital visits come on the eve of a meeting of the World Health Organization’s decision-making body, which is expected to discuss the next phase of an investigation into Covid-19’s origins.

Current and former officials familiar with the intelligence about the lab researchers expressed differing views about the strength of the supporting evidence for the assessment. One person said that it was provided by an international partner and was potentially significant but still in need of further investigation and additional corroboration.

Another person described the intelligence as stronger. “The information that we had coming from the various sources was of exquisite quality. It was very precise. What it didn’t tell you was exactly why they got sick,” he said, referring to the researchers.

November 2019 is roughly when many epidemiologists and virologists believe SARS-CoV-2, the virus behind the pandemic, first began circulating around the central Chinese city of Wuhan, where Beijing says that the first confirmed case was a man who fell ill on Dec. 8, 2019.

The Wuhan Institute hasn’t shared raw data, safety logs and lab records on its extensive work with coronaviruses in bats, which many consider the most likely source of the virus.

China has repeatedly denied that the virus escaped from one of its labs. On Sunday, China’s foreign ministry cited a WHO-led team’s conclusion, after a visit to the Wuhan Institute of Virology, or WIV, in February, that a lab leak was extremely unlikely. “The U.S. continues to hype the lab leak theory,” the foreign ministry said in response to a request for comment by The Wall Street Journal. “Is it actually concerned about tracing the source or trying to divert attention?”

The Biden administration declined to comment on the intelligence but said that all technically credible theories on the origin of the pandemic should be investigated by the WHO and international experts.

“We continue to have serious questions about the earliest days of the Covid-19 pandemic, including its origins within the People’s Republic of China,” said a spokeswoman for the National Security Council.

“We’re not going to make pronouncements that prejudge an ongoing WHO study into the source of SARS-CoV-2,” the spokeswoman said. “As a matter of policy we never comment on intelligence issues.”

Beijing has also asserted that the virus could have originated outside China, including at a lab at the Fort Detrick military base in Maryland, and called for the WHO to investigate early Covid outbreaks in other countries.

Most scientists say they have seen nothing to corroborate the idea that the virus came from a U.S. military lab, and the White House has said there are no credible reasons to investigate it.

China’s National Health Commission and the WIV didn’t respond to requests for comment. Shi Zhengli, the top bat coronavirus expert at WIV, has said the virus didn’t leak from her laboratories. She told the WHO-led team that traveled to Wuhan earlier this year to investigate the origins of the virus that all staff had tested negative for Covid-19 antibodies and there had been no turnover of staff on the coronavirus team.

Marion Koopmans, a Dutch virologist on that team told NBC News in March that some WIV staff did fall sick in the autumn of 2019, but she attributed that to regular, seasonal sickness.

“There were occasional illnesses because that’s normal. There was nothing that stood out,” she said. “Maybe one or two. It’s certainly not a big, big thing.”

It isn’t unusual for people in China to go straight to the hospital when they fall sick, either because they get better care there or lack access to a general practitioner. Covid-19 and the flu, while very different illnesses, share some of the same symptoms, such as fever, aches and a cough. Still, it could be significant if members of the same team working with coronaviruses went to hospital with similar symptoms shortly before the pandemic was first identified.

David Asher, a former U.S. official who led a State Department task force on the origins of the virus for then-Secretary of State Mike Pompeo, told a Hudson Institute seminar in March that he doubted that the lab researchers became sick because of the ordinary flu.

“I’m very doubtful that three people in highly protected circumstances in a level three laboratory working on coronaviruses would all get sick with influenza that put them in the hospital or in severe conditions all in the same week, and it didn’t have anything to do with the coronavirus,” he said, adding that the researchers’ illness may represent “the first known cluster” of Covid-19 cases.

Long characterized by skeptics as a conspiracy theory, the hypothesis that the pandemic could have begun with a lab accident has attracted more interest from scientists who have complained about the lack of transparency by Chinese authorities or conclusive proof for the alternate hypothesis: that the virus was contracted by humans from a bat or other infected animal outside a lab.

Many proponents of the lab hypothesis say that a virus that was carried by an infected bat might have been brought to the lab so that researchers could work on potential vaccines—only to escape.

While the lab hypothesis is being taken more seriously, including by Biden administration officials, the debate is still colored by political tensions, including over how much evidence is needed to sustain the hypothesis.

The State Department fact sheet issued during the Trump administration, which drew on classified intelligence, said that the “U.S. government has reason to believe that several researchers inside the WIV became sick in autumn 2019, before the first identified case of the outbreak, with symptoms consistent with both Covid-19 and seasonal illnesses.”

The Jan. 15 fact sheet added that this fact “raises questions about the credibility” of Dr. Shi and criticized Beijing for its “deceit and disinformation” while acknowledging that the U.S. government hasn’t determined exactly how the pandemic began.

The Biden administration hasn’t disputed any of the assertions in the fact sheet, which current and former officials say was vetted by U.S. intelligence agencies. The fact sheet also covered research activities at the WIV, its alleged cooperation on some projects with the Chinese military and accidents at other Chinese labs.

Asked about the Jan. 15 statement, State Department spokesman Ned Price said: “A fact sheet issued by the previous administration on January 15 did not draw any conclusions regarding the origins of the coronavirus. Rather, it focused on the lack of transparency surrounding the origins.”

Though the first known case was Dec. 8, several analyses of the virus’s rate of mutation concluded that it likely began spreading several weeks earlier.

The WHO-led team that visited Wuhan concluded in a joint report with Chinese experts in March that the virus most likely spread from bats to humans via another animal, and that a laboratory leak was “extremely unlikely.”

However, team members said they didn’t view raw data or original lab, safety and other records. On the same day the report came out, WHO chief Tedros Adhanom Ghebreyesus said the team hadn’t adequately examined the lab leak hypothesis, and called for a fuller probe of the idea.

The U.S., European Union and several other governments have also called for a more transparent investigation of Covid-19’s origins, without explicitly demanding a lab probe. They have called in particular for better access to data and samples from potential early Covid-19 cases.

Members of the WHO-led team said Chinese counterparts had identified 92 potential Covid-19 cases among some 76,000 people who fell sick between October and early December 2019, but turned down requests to share raw data on the larger group. That data would help the WHO-led team understand why China sought to only test those 92 people for antibodies.

Team members also said they asked for access to a Wuhan blood bank to test samples from before December 2019 for antibodies. Chinese authorities declined at first, citing privacy concerns, then agreed, but have yet to provide that access, team members say.

WHO: Record weekly jump in COVID-19 cases but fewer deaths