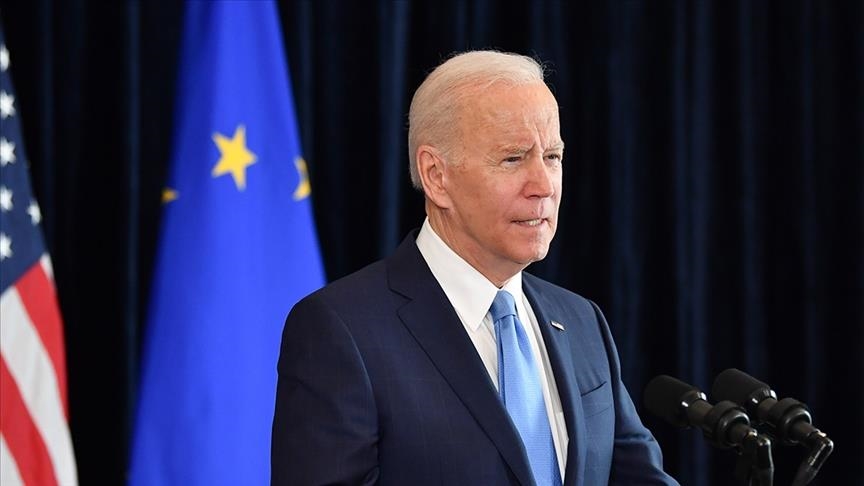 Shafaq News/ US President Joe Biden on Saturday called Russian President Vladimir Putin “a butcher” after meeting with Ukrainian refugees in Poland, and said he was unconvinced by Russia’s claim it was scaling down its war aims in neighboring Ukraine.

Asked by reporters what he thought of Putin’s actions, Biden responded simply: “He’s a butcher.”

He was also asked what he thinks about Russia’s change in strategy after meeting refugees in Warsaw.

The Kremlin said Biden’s branding of Putin as a “butcher” lowered the chances for an improvement in ties between Moscow and Washington.

“Still, a state leader should keep their temper,” Kremlin spokesman Dmitry Peskov is quoted as saying by the official TASS news agency.

“And, of course, each time such personal insults narrow the window of opportunity for our bilateral relations under the current [US] administration. It is necessary to be aware of this,” he added.

Biden’s comments came after his conversations with the refugees at the National Stadium in Warsaw, which more recently had served as a field hospital for COVID-19 patients.

“What I am always surprised by is the depth and strength of the human spirit,” he said. “Each one of those children said something to the effect of, ‘Say a prayer for my dad or grandfather or my brother who is out there fighting.”

The president, who was set to return to Washington later in the day, tried to use the final hours of his European trip to reassure Poland that the US would defend against any attacks by Russia, as he acknowledged that the NATO ally bore the burden of the refugee crisis from the war.

Before leaving Poland, Biden was to deliver an address expected to focus on the difficult path ahead as US and Western allies continue to assist Ukraine and prod Russia to end its invasion.

“Your freedom is ours,” Biden told Polish President Andrzej Duda earlier, echoing one of that country’s unofficial mottos.

At the Presidential Palace in Warsaw, the two leaders spoke of their mutual respect and shared goals to end the Russian invasion of Ukraine.

More than 3.7 million people have fled Ukraine since the war began, and more than 2.2 million Ukrainians have crossed into Poland, though it is unclear how many have remained there and how many have left for other countries.

Earlier this week the US announced it would take in as many as 100,000 refugees, and Biden told Duda that he understood Poland was “taking on a big responsibility, but it should be all of NATO’s responsibility.”

Biden called the “collective defense” agreement of NATO a “sacred commitment,” and said the unity of the Western military alliance was of the utmost importance.

“I’m confident that Vladimir Putin was counting on dividing NATO,” Biden said. “But he hasn’t been able to do it. We’ve all stayed together.”

European security is facing its most serious test since World War II. Western leaders have spent the past week consulting over contingency plans in case the conflict spreads. The invasion has shaken NATO out of any complacency it might have felt and cast a dark shadow over Europe.

Biden’s national security adviser, Jake Sullivan, said Biden’s speech would outline the “urgency of the challenge that lies ahead” and “what the conflict in Ukraine means for the world, and why it is so important that the free world stay in unity and resolve in the face of Russian aggression.”

In addition to the meeting with Duda, Biden attended a meeting of American and Ukrainian diplomatic and defense officials for an update on Ukraine’s military, diplomatic and humanitarian situation.