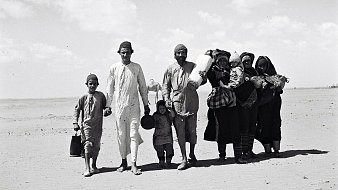 Shafaq News / The rain beat down relentlessly in the pitch-black night as the five members of Sabah Zubaida’s family emerged from a taxi in an Iraqi Kurdish village. “What are you doing here?” asked a Peshmerga (Kurdish fighter) with a flashlight.

“We are Jews trying to escape,” came the answer.

The year was 1970. Three nights passed until the Peshmergas could drive their unexpected visitors out of Iraq to freedom in Iran, which under the Shah’s rule was friendly to Israel. The Zubaida family eventually made it to the UK.

Almost 2,000 Jews made the hazardous journey through mountainous Kurdistan between 1970 and 1971 after Israel, the Kurds and Iran struck a deal to allow desperate Jews to be smuggled out of Iraq.

Some of their stories are told in a short film commissioned by Harif, the UK Association of Jews from the Middle East and North Africa, based on interviews by Sephardi Voices UK.

The film will be shown on Wednesday at JW3, North London.

The Iraqi Jews left with one suitcase in the middle of the night, as if they were going on holiday.

One escapee was Edwin Shuker, now a vice-president of the Board of Deputies, who, aged 16, was one of 22 crammed into a Kurdish pick-up truck.

Conditions for the remnant Jewish community of 3,000 took a dramatic turn for the worse after Israel’s victory in the 1967 Six-Day War.

The date of the film screening, to be observed in Israel and worldwide, was designated by a 2014 Knesset law.

It symbolically recalls the day after the UN Palestine Partition plan of 1947 was passed, when anti-Jewish riots in several Arab countries broke out, triggering the exodus of 850,000 Jews.

The 30 November commemoration highlights the need to achieve international recognition of their suffering. An international accounting firm is assessing the value of Jewish property lost in the Arab world: the results will be released soon.