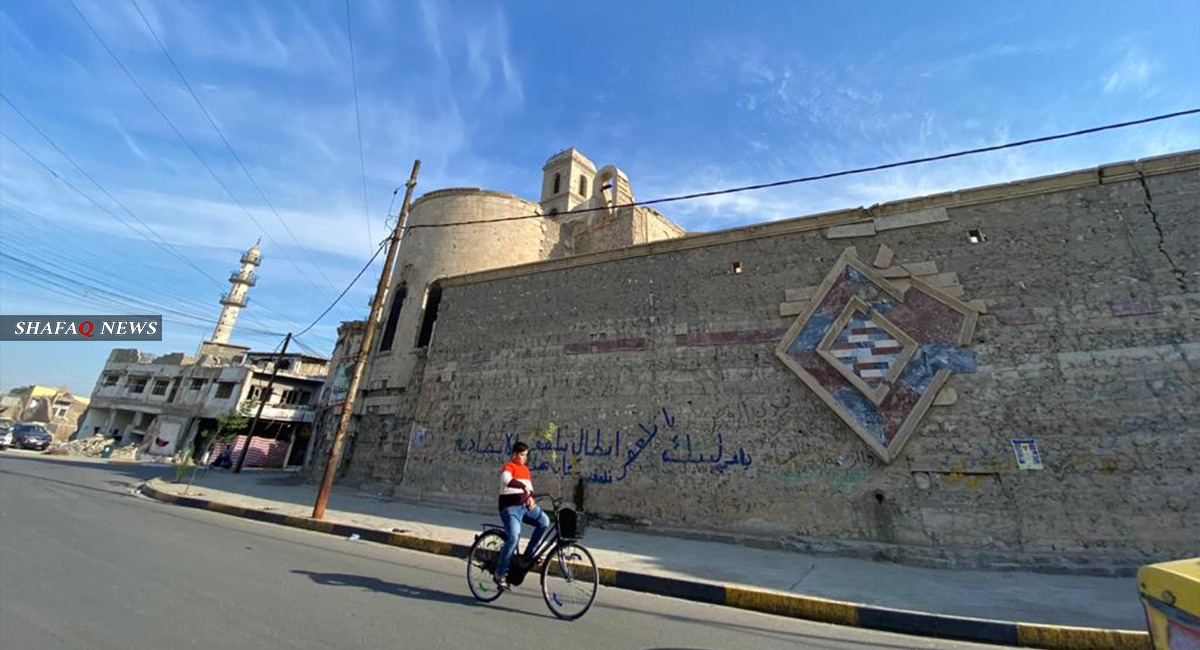 Shafaq News / Three years had passed since the liberation of Mosul, and yet church bells are still silent and its doors are still closed until an unknown notice. Dozens of churches have been looted and destroyed by terrorists. Despite being liberated from terrorism, those churches are still neglected by the government to this day.

Either Islam or tribute

The dark days -when ISIS invaded the city, is still in Mosul’s memory. ISIS militants quickly turned their attention to Christian families and property and marked Christians’ homes as property belonging to the so-called Islamic State.. Only a month after the invasion of the city, Mosul’s Christians found themselves facing three options, entering Islam, paying tribute, or leaving Mosul altogether.

Tens of thousands of Christians fled the city towards Kurdistan and Nineveh Plains and did not return. Many emigrated out of Iraq. But Mosul's homes and churches are still nostalgic for its people; their former Muslim neighbors are still hoping for their return and describe them as "Mosul’s Flowers”.

The churches were headquarters and prisons.

Abu Al-Abbas, a resident of the Great Mosque of al-Nuri’s area -located just 100 meters from Mosul's most famous church, the Our Lady of the Hour Church, told Shafaq News agency that the church and its facilities remained -for three years, as a headquarter for ISIS operatives and as a prison for detainees.

He added that the terrorists had used the churches for these purposes due to their basements. ISIS believed that the international coalition forces would not target these churches -as they are ancient places of worship.

the Al-Tahira church was headquarters to the so-called Hesbah elements, who arrested and detained the men on charges including shortening beards, not going to mosques, or for having cigarettes in their possession.

Abu Al-Abbas continued his talk about life in the city and their memories with Christians in Mosul; pointing out that they were like one family.. Adding that some of them call from time to time and ask about our and the neighbors’ situation and well being, and remember how quiet and simple their lives were when there was no division and sectarian tendencies.

Abu Al-Abbas pointed sadly to one of the destroyed houses –the closest to the Great Mosque of Al-Nuri, saying that it was the home of The Christian footballer at The Mosul Club, ’Ayid Assu.

Abu Al-Abbas added that ‘ayid was one of the best neighbors and is still their friend until now; whenever he visits Iraq he comes to the neighborhood and asks about its people and his old friends.. But he can not return after settling abroad and after the calamities caused by terrorism and extremists.

"Christians are the flowers of Mosul", Abu Al-Abbas concluded.

Only 50 Christian families have returned

“The number of the returned Christian families to the city is only 50”, Father Ra’ed Adel, head of the Syriac Catholic Churches in Mosul, told Shafaq News agency.

Father Ra’ed said that there was only one Sunday mass held in the Lady of the Annunciation Church (located in the Al-Muhandisen area, on the left side of the city), while the rest of the city's churches were closed in the hope of reconstruction.

"There is only one church that UNESCO is working on, and it is the Al-Tahira church in the Old City near The Sha’arin Bazaar, while the rest of the churches are silent and their doors are closed and need a great deal of effort to return”, father Ra’ed added.

As for the return of Christians, he said that the issue of their return is linked to Mosul’s stability in general.

Father Ra’ed is one of the most Christian clerics seeking to restore the social fabric of Mosul, sharing its rituals with Muslims and attending one of the most recent religious ceremonies in Mosul to mark Prophet Mohammed's birth.

"Muslims are the ones who are most affected by terrorism, and if social disintegration and sectarianism continue to exist, then the real goal of terrorism is achieved.. And we will not allow that”, Father Ra’ed said about what terrorism has done to Christians.

The holidays bring us together

Returning to the alleys of the Old City, Uncle Ahmed, a resident of the Meydan area overlooking the Tigris River, said that the holidays were gathering Christians and Muslims..Whenever an occasion came, candy and congratulations roamed the neighborhood's alleys from house to house.

During the Muslim holidays, Uncle Ahmed said that Christians ate the Muslims’ Kleicha (The national cookie of Iraq, mostly filled with dates), referring to his mother's pride in their Christian neighbors, saying that she was collecting the distinctive and well-roasted pieces of Kleicha to put them in dishes and distribute it to the Christian neighbors.. And during Christian holidays, they also made sweets and presented them to us, "I don't remember a day when a quarrel or problem occurred between us; we lived for decades as a family”.

Ahmed said, “The terrorists’ harassment of Christians in Mosul after 2003 and until 2014 -when Mosul fell to ISIS, forced thousands of them to emigrate and leave the city”.

“Even today, after the liberation of the city; there are many powerful people who are trying to seize the Christians’ property, taking advantage of their departure from the country”, Uncle Ahmed warned.

The life is back to Mosul’s statues