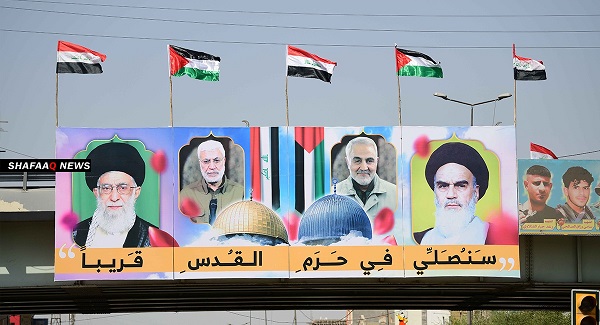 Shafaq News/ Important dates in 2021 await Iraqis as they could affect their lives deeply over the next twelve months.

Perhaps January 3rd is the earliest and biggest concerned date to many Iraqis. It marks the first anniversary of the US drone strike which assassinated the leader of the Revolutionary Guards’ Quds Force, Qassem Soleimani and the deputy commander of Popular Mobilization Forces, Abu Mahdi Al-Muhandis.

Baghdad and Kurdistan are in a holding pattern for a possible military escalation between the United States and Iran. The Iranian officials have repeatedly promised vengeance for their most prominent military commander. In return, the Americans threatened a crushing response to any military strike on their sites.

Iraqis fear the military confrontation could turn their country into a battle zone. and lead to a more serious political and economic situation; while they still struggle over the economic and health crises that have affected their country in 2020.

January 15th marks the day when Washington will start implementing its announced plan to reduce the size of its troops in Afghanistan and Iraq to 2,500 in each; as a part of the US President pledges to limit the U.S. military presence in the Middle East.

Lately, Trump increased the U.S. military presence in the Gulf and Eastern Mediterranean region when he flew two nuclear-capable B-52 bombers to the Middle East in a message of deterrence to Iran.

Therefore, it stands to reason for Iraqis to be concerned, on the one hand, the U.S. military presence reduces inside Iraq with its significant impact, but on the other hand, American messages warn the Iranians not to “play with fire”.

Five days after implementing the reduction of US troops in Iraq, Democratic President-elect, Joe Biden enters the White House, a date that also receive attention.

May 7th marks the first anniversary of the government of Prime Minister Mustafa Al-Kadhimi. When Iraqis will review the current government’s performance.

A wave of criticism, analyses and praises is expected regarding the PM and the ministers’ performance since they took office a year ago.

It may raise the question of whether Al-Kadhimi’s role will be limited to what he has done so far - the leadership of Iraq in a transitional phase - and leave the political field.

The majority of Iraqis are waiting for June 6th, when the early parliamentary elections will be hold in response to a key demand of protesters, as well as the directive of the Iraq's top Shi'ite cleric Grand Ayatollah Ali Al-Sistani.

For Iraqis, this date represents an apportunity to revive the political process. It could also change the political forces’ structure that will take power in the future Iraq.

October 1st marks the second anniversary of Iraqi protests against corruption, unemployment, and lack of freedom.

The date could renew the demonstrations, or perhaps, after the June 6 early elections have set and a calm settles in the streets, it may represent a symbolic occasion to honor the victims of October movement.

During 2021, Iraq will witness fateful dates that may affect its future economically, healthily and politically.