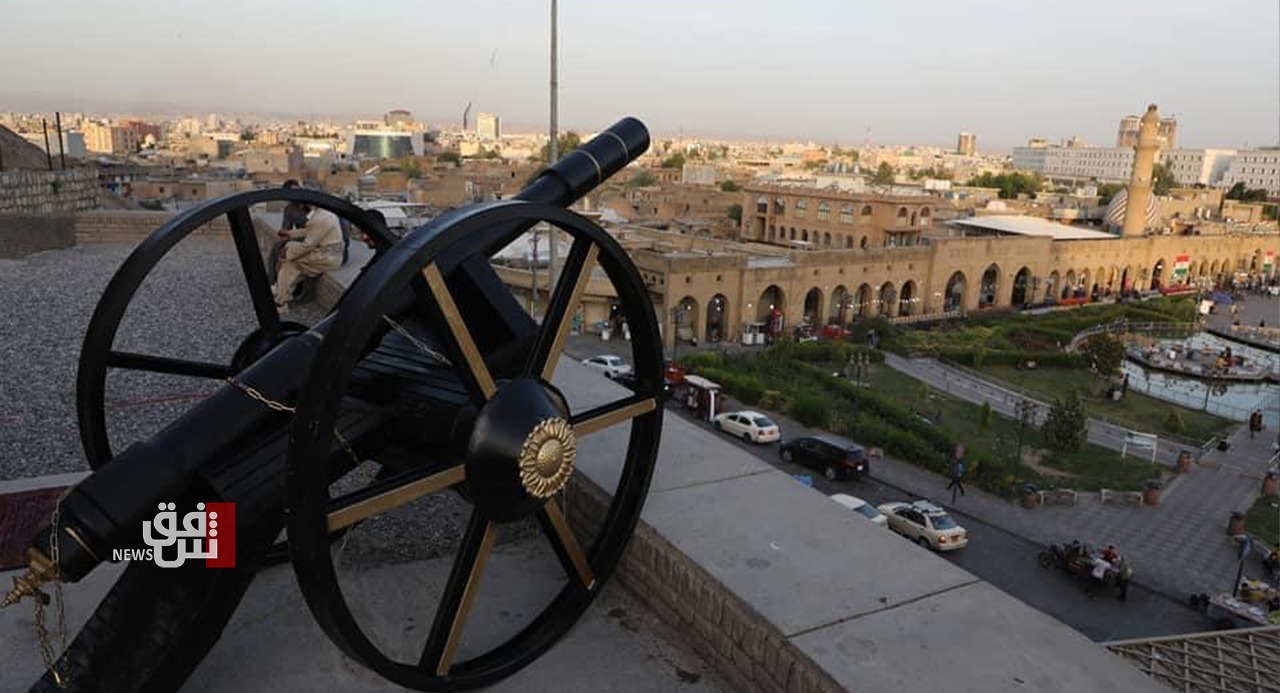 Shafaq News/ For more than 27 centuries, Jews lived in the region around Erbil, the capital of Iraq’s semi-independent Kurdish Regional Government.

Once home to a Jewish community numbering in the tens of thousands, the Kurdistan region and wider area of Northern Iraq is also, many believe, the final resting place of the prophets Nahum and Jonah and where lived one of the first female rabbinic figures, Asaneth Barzani. The city of Erbil was even once the capital of the Jewish kingdom of Adiabene, after the conversion of its Queen Helene and her son Monobaz in the first century AD.

Along with the rest of Iraq’s Jews, most Kurdish Jews left in the 1950s under pressure from the government following the establishment of (the State of Israel.)

Levi Meir Clancy, a Los Angeles native who has spent the last several years in Erbil, has devoted himself to resurfacing its Jewish story and showcasing the region’s ethnic diversity.

To that end, he has spent years collecting Jewish artifacts — he now has more than 700 — from the region and elsewhere in Iraq for an exhibition titled, the “Museum of Ours.” It’s a project of the “Foundation of Ours,” which Clancy, who was raised in a Reform synagogue, founded to preserve Jewish life and promote tolerance. The foundation also serves as a synagogue, hosting services for Jews who visit the area.

“The mission is to support Jewish expression in the Kurdistan region, but also to provide platforms for reconciliation with all the components in the society,” the foundation’s website says. In addition to hosting the museum, the foundation also hopes to provide support for Jewish pilgrims who may one day decide to visit the region.

Finding his niche in Iraqi Kurdistan

Clancy first visited the Kurdistan region at the age of 19 in 2010, after falling in love with the area’s archaeological history as a college student at UCLA, where he studied molecular biology. His passion for history and ancient cultures only grew, and after college, he moved to Kurdistan, buying a house and finding work as a software engineer. Iraq was his home through the final years of the U.S. invasion, as well as the rise and fall of ISIS. And though he could hear and even see, on occasion, the violence in the distance, he felt relatively safe there.

“I knew that the Kurdistan Region had a durable border,” he said.

After a few years in the region, Clancy decided to give tours of Erbil’s old town and history museum. It hearkened back to his time as a young guide at the Pasadena Museum of History.

“The turnout was insane, I made one little post, and dozens of people came,” he said of the tours, which he offered free of charge. “You would expect them to all be foreigners, but at least a plurality of them were Kurds.”

Surprised that so many locals were coming to him, an outsider, to learn about their own history, Clancy at first figured the enthusiasm was a fluke, but he continued to offer tours and people continued to show up in droves. One of his walking tours of the city drew 60 people from all walks of life. “It was Kurds, and it was Arabs, Iraqis, Syrians, Yazidis, Assyrians, Christian Chaldeans. It was incredible.”

From those tours emerged the exhibitions, each featuring a few of his artifacts that he displays at different locations around Erbil. His status as an outsider, he said, seems to make him and his roving museum more approachable, and allows him to bridge some of the divides within Iraqi society that might have stymied others.

His unique standing in the community, he decided, gave him a responsibility to preserve the history of the region for the people who live there.

Creating the museum — he envisions an actual building one day — Clancy aims to make the point that despite the tensions among its current inhabitants, the region’s history and heritage is a treasure that belongs to all of its myriad ethnic and religious groups. That includes the exiled Jewish community - the first focus of his project.

Why put the focus on the Jewish community first?

“Because no one else does,” and because its members have long left the region, Clancy said. “It just doesn’t exist.”

Building a collection — and a reputation

Presenting history with an actual object seems to engage people, he has noticed. “It’s almost like there’s another soul in the room and you can talk about issues which are so sensitive and they open up these incredible doorways,” he said. It’s one thing to explain how Iraqi Jews celebrate Passover, he continued, but it’s another to do so with a haggadah printed in Baghdad, which still bears the wine stains from seders past and has been rebound with letters written between Iraqi Jews.

Though he has collected troves of Jewish books and artifacts, Clancy refuses to buy them from dealers in Iraq itself for fear that they may have been looted from the fleeing Jewish community in the 1950s. He instead collects artifacts from Britain, Israel and other places where the Jewish community is more likely to have sold them willingly.

Through his historical work, Clancy came to the attention of the Kurdish Regional Government.

After the liberation of Mosul and the surrounding region from ISIS in 2017, restoration work began on the tomb of the Prophet Nahum, one of the twelve minor prophets. In the Book of Nahum, the prophet catalogues the destruction of the Assyrian city of Nineveh. Today, on Nineveh’s ruins stands the modern Iraqi city of Mosul.

The tomb is housed in a rapidly decaying synagogue, — abandoned by its Jews in 1948 — in the town of Alqosh, some 30 miles north of Mosul. The project was taken up by the ARCH International(Alliance for the Resotration of Cultural Heritage) with funding from the U.S and Kurdish governments, among others.

Kurds, who had long been in conflict with Pan-Arabist governments of Saddam Hussein in Iraq and the Assads in Syria, have historically had warmer relations with Israel than others in the Middle East, and Israel provided material support to the Iraqi Kurdish revolts of the 1960s.

Nonetheless, as an only semi-independent part of Iraq, the KRG still has no official relations with Israel. Seeking to involve the leadership of the Kurdish Jewish community — which have overwhelmingly settled in Israel — in the restoration project, the KRG used Clancy as an unofficial liaison.

And for his own projects, he remains in close contact with Israel’s Kurdish Jewish community.

Clancy wants everything about the Museum of Ours to be respectful of the Orthodox standards and traditions of the Kurdish Jewish community, which are often so different from those with which he was raised.

“Part of the organization’s bylaws are that it has to follow the customs of the communities involved,” he explained. “I come from a fairly typical Jewish American mixed family, but when it comes to these affairs, I subtract myself out of the equation. My role is to be of service.”

Currently, many of the artifacts Clancy has gathered can be viewed at temporary exhibitions he set up around Erbil, and online on Facebook, as well as at the museum’s website.

He looks forward to the day those artifacts can be collected in a concrete museum that will be visited by both people who live in Iraqi Kurdistan and Jewish and non-Jewish tourists alike.

“That’s my dream. I’m certain it will happen. I’ll save up the money, buy up the land and build the space,” he said. “I have no doubt at all.”