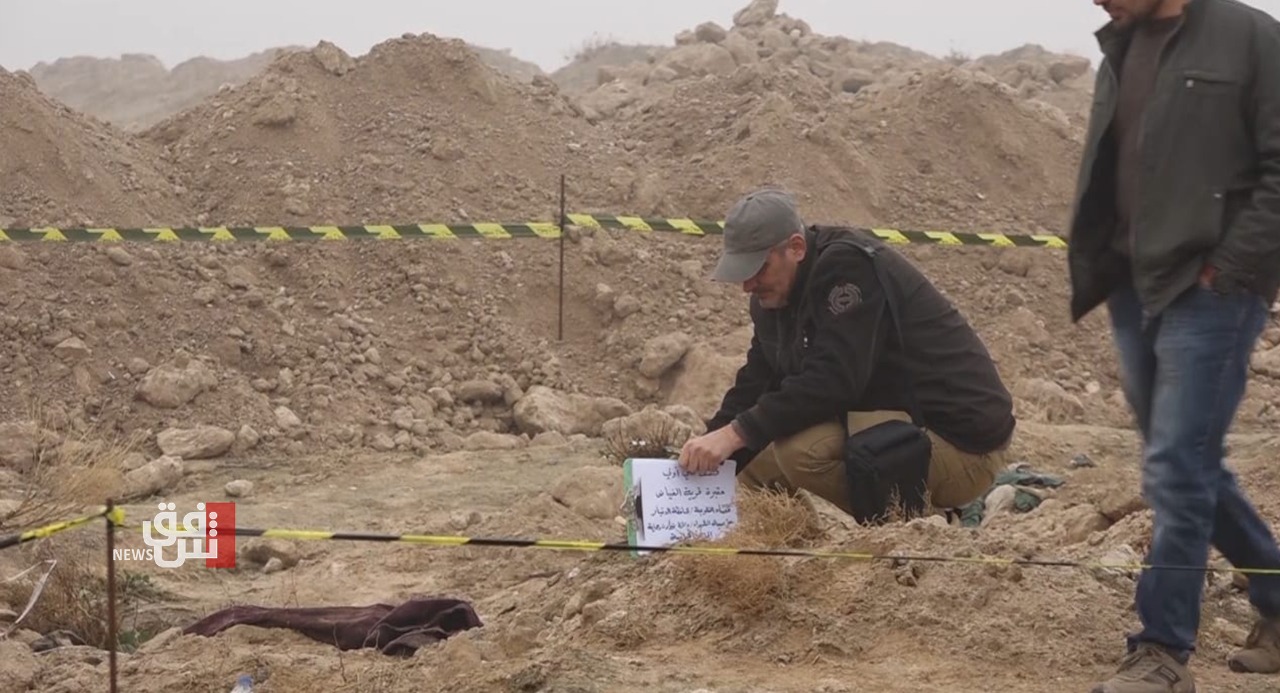 Shafaq News / For the second week in a row, political and popular controversy continues in Al-Anbar over leaks that confirmed the discovery of a new mass grave located about 30 km southeast of Fallujah, close to the international highway linking the governorate to Baghdad.

The mass grave contains an unknown number of skulls, bones, civilian clothes, and plastic handcuffs, proving that a mass execution was carried out at the site where federal police forces and armed factions used to gather between 2014 and 2015, according to an Iraqi security official.

"The site has been identified, and security measures have been imposed around it. However, no steps have been taken to identify the victims. The mass grave was discovered due to erosion and exhumation by animals," a security official stated.

He continued, "being in charge of the territory, Al-Anbar Operations Command still awaits several steps from the Martyrs' Foundation and the Al-Anbar Health Directorate."

This mass grave is the third of its kind in nearly two years, with many other previously found in the Abu Fayyad village and Al-Bou Rudeini area east of Al-Anbar.

"The site has so far been closed, and a preliminary inspection has been conducted. The mass grave contains remnants of Arab clothes (dishdasha) and sportswear, indicating that the victims are civilians. Also, the skulls show signs of holes, which indicates that the victims were executed," the official confirmed.

"An armed faction tried to enter the area more than once after the discovery of the mass grave, but they were prevented for fear of scattering evidence or manipulating the site. Therefore, the security and health authorities should be able to place the mass grave under judicial protection, to prevent manipulating the crime scene likely caused by a field execution."

Pressures to hide the crime

Omar Al-Farhan, director of the Iraqi War Crimes Documentation Center, said, "Information about the location where the mass grave was found confirms that it was the operations' area for several armed factions."

Al-Farhan added, "One of those factions tried to enter the mass grave's site a few days ago, but security forces informed them that the site was under judicial protection and they had to withdraw."

He also revealed what he described as "pressures exerted in an attempt to hide a crime". He also called on the security authorities to swiftly settle the situation to prevent any manipulation with the mass grave's site.

Meanwhile, in response to accusations that armed factions were involved in the crime, considering that the mass grave's area was not occupied by ISIS and was the headquarters of many armed factions and federal police during the liberation of Al-Anbar, the administrative assistant of the commander of the Al-Hashd Al-Shaabi east of Al-Anbar, Ali Al-Muzaffar, stated that these are false accusations. On the charges that an armed faction belonging to the P.M.F. tried to tamper with the mass grave, he said, "Everyone can go to the site and inspect it to make sure that we have nothing to do with it."

Zafer Al-Ani, a member of the Iraqi parliament, called on the federal government to open the mass graves found in Al-Anbar, investigate them, identify the victims, and hold the perpetrators accountable, "The government should open mass graves that contain the remnants of thousands of the liberated city's sons, executed and buried by ISIS or other criminal militias."

"The unjustified delay in taking legal and humanitarian measures from official institutions makes us suspicious of the government's seriousness in closing this file. We hope that this behavior will not be misinterpreted as a cover-up of certain entities," Al-Ani added.