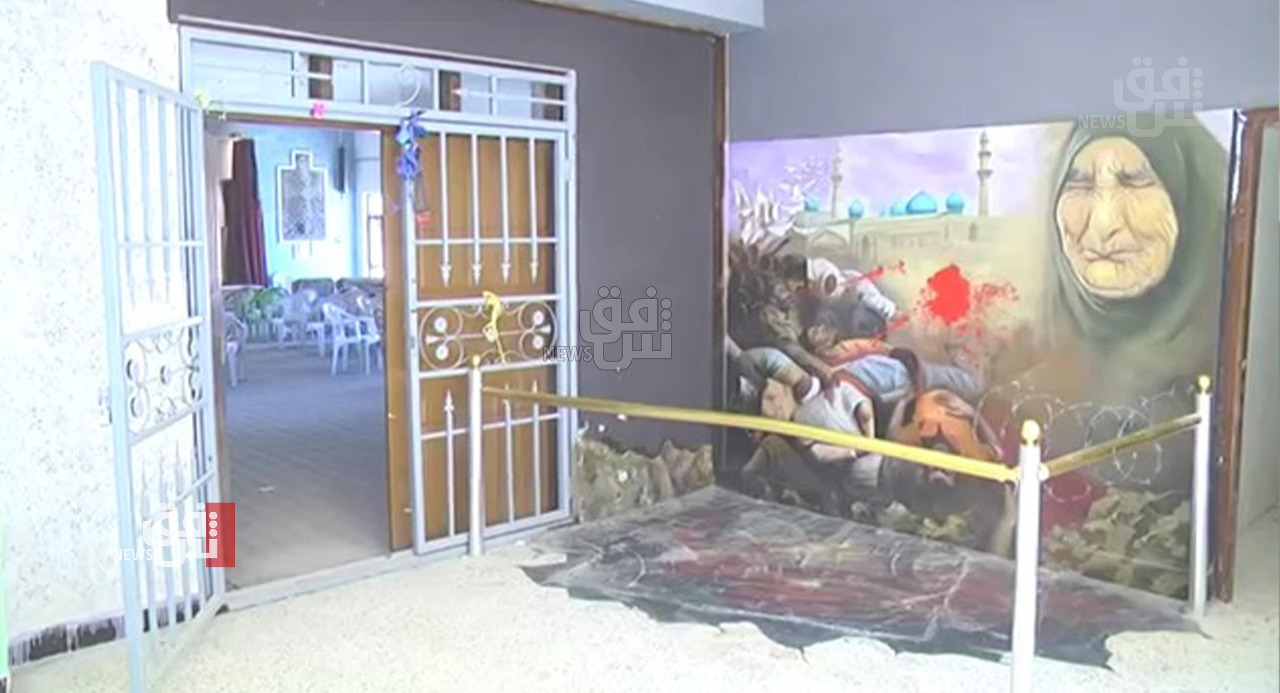 Shafaq News / Even though years have passed since the liberation of Al-Anbar's cities in western Iraq, the repercussions and debris of war still remind residents of many scenes of terror, fear, and corpses, particularly ISIS's prisons where they tortured and abused anyone who violated their beliefs during their control over the governorate.

Al-Shabab Palace, the safe space in Ramadi district, and the Institute of Fine Arts in al-Fallujah district are among ISIS's detention facilities. However, those sites are now brimming with hope, thanks to the efforts of a group of volunteers working with international and regional organizations to transform them into designated areas for painting, playing, and education.

"Ramadi, in general, was an ISIS prison. Many government buildings were converted into prisons, detention facilities, interrogation places, etc., one of which was called Al-Shabab Palace. When we returned to the city, we found that half of them had been destroyed," said Ibrahim al-Awsaj, Ramadi district's administrator.

"The building has been rehabilitated, in agreement with international organizations, to be a youth center for music and arts, and was opened two days ago with special support from the United Nations," he told Shafaq News agency.

"We are implementing a strategy to eliminate ISIS and its ideology, which have plagued us in the past. Today, we have begun to recover and have proceeded to advanced stages of altering convictions and ideas, which has resulted in Ramadi's significant reconstruction, thanks to the efforts of its sons and the government, "He added.

"Because people are the most important component of reconstruction, we are putting a lot of emphasis on the process of intellectual transformation, and the rehabilitation of Al-Shabab Palace is one of these achievements, alongside others that will soon see the light of day," he stated.

According to Laith al-Khatib, the head of the Safe Space in Al-Anbar, "The location was designated for gathering the Ministry of Youth's athletes and figures visiting the governorate. It was opened in 2012 but was never fully operational because ISIS took control of the city in 2013 and utilized it as a base for terrorist operations. Following the city's liberation, the Safe Space was used as a military headquarters by one of Al-Anbar Police Directorate's emergency units. However, they began gradually evacuating it after 2017."

"We were working as volunteers at the time, and we petitioned the local authorities to allow us to rebuild the building on our own dime, providing it with equipment for free courses and lectures in support of impoverished families. Finally, the ministry accepted, and in 2018, a United Nations organization provided us with a small grant for restoration, "al-Khatib continued.

"Initially, it was limited to courses, and then it developed for peacebuilding courses, skills development programs, first aid courses, then an interactive theatre, a taekwondo section, and other sports departments," he said.

"The Safe Space concept is unique and has not been implemented elsewhere. The title alone conveys that this location is intellectually safe and that everyone can freely practice what they love," al-Khatib said, adding, "Young people have operated the place without any involvement from the government, whether technical or administrative. There are also no reinforcements or assistance for the workers because the principle of the site is that you do not need money to provide what pleases your community. Also, the volunteers are not bound to a schedule but can come and go anytime they like."

ISIS has turned many houses and government and public property in al-Fallujah district, east of Al-Anbar, into prisons and detention facilities to torture detainees and those who violate their beliefs, perhaps the most prominent of these places is the Institute of Fine Arts, where eyewitnesses said, "the place was full of rotting bodies and traces of innocent people's blood, tortured by ISIS in this place."

"When we returned to our city after it had been liberated, we began to normalize our lives and attempted to reclaim our homes and jobs. I was a teacher at the Institute of Fine Arts, where we were astonished to discover a 150-centimeter-deep grave holding approximately 16 bodies that were beginning to decay, "said Mustafa Al-Jumaili, a member of the institute's teaching team.

"A specialized medical team, along with the security forces at the time, recovered the bodies and took the necessary action. On the sidelines of that massacre, we, as administration and teachers, commemorated the massacre through a wall work in the same place, to express and denounce what happened to them," al-Jumaily told Shafaq News agency.

Iraq proceeds to explore for gas west of Al-Anbar