Erbil imposes fine on taxi drivers who do not wear masks

Shafaq News / Decisions that oblige drivers of public and private transport vehicles and passengers to wear masks will be activated from tomorrow, According to what the General Traffic Department in Erbil Governorate.

"According to the decision issued by the Ministry of Interior of Kurdistan Region, on Sunday May 31, drivers of public transport vehicles and taxis should wear the masks as well as their passengers, while adhering to the implementation of health and preventive instructions,” The Directorate said in a statement received by Shafaq News Agency.

The statement stressed that the violators will be held accountable according to the 10th paragraph mentioned in statement No. 37 issued by the Ministry of Interior of Kurdistan Region.

The Ministry of Interior of Kurdistan Regional Government recently decided to extend the travel ban between the provinces of the region and the rest of the provinces of Iraq until mid of next month.

The statement also included that public transport and taxi drivers must not allow passengers who do not wear masks and gloves to ride their cars, warning the violator driver to pay a fine of (50,000) dinar per case.

Erbil sends a message to residents , we might stop movements

There will be no lockdowns, Corona might turn into pandemic: Erbil 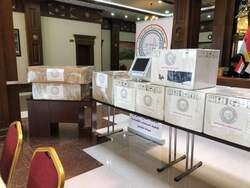