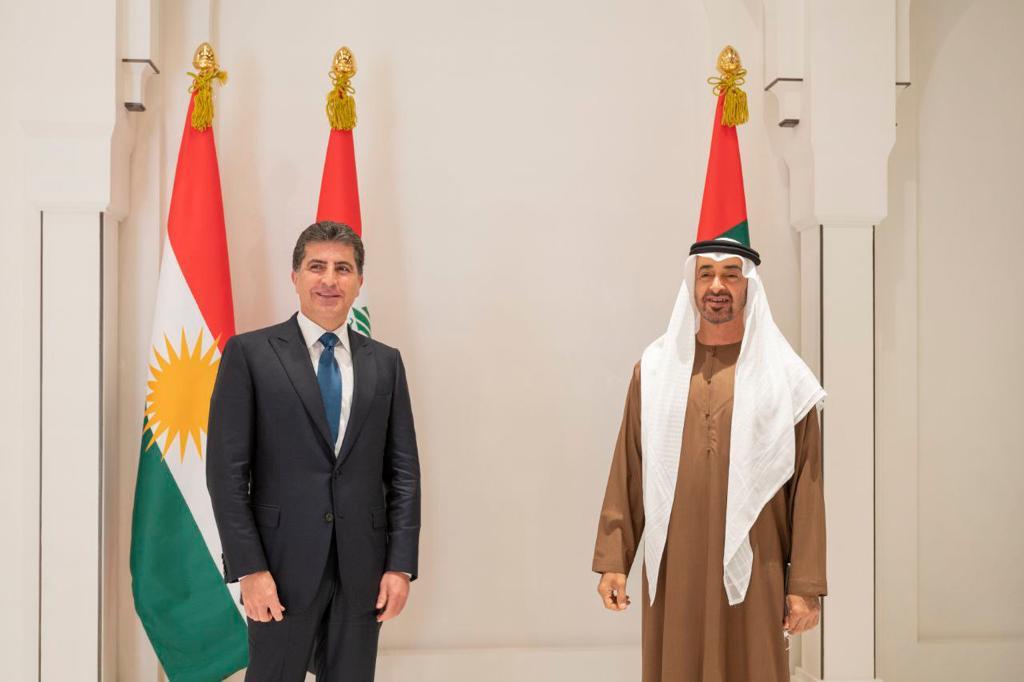 Shafaq News/ The Presidency of Kurdistan revealed on Saturday details about the meeting between President Nechirvan Barzani and UAE's Crown Prince of Abu Dhabi and Deputy Commander-in-Chief of the Armed Forces, Mohammed bin Zayed Al Nahyan.

The two sides discussed several topics of common interests including the political situation, the upcoming Iraqi elections, the threats of terrorism, the cooperation and coordination in security field.

According to the presidency’s statement, the Crown Prince of Abu Dhabi expressed the desire to develop ties and expand cooperation with the Region, confirming the UAE’s support for Kurdistan.

For his part, Barzani congratulated Bin Zayed for electing the Emirates as a member in UN Security Council, considering it as “evidence of the world's confidence in the policy, position and important role of the UAE,” adding that “it also demonstrates the high level of diplomacy, relations and influences that the UAE has at the global level.

Barzani also thanked the UAE for the humanitarian aid, especially the recent initiative of Sheikha Fatima bint Mubarak, in which thousands doses of Covid-19 vaccines were offered to the displaced and refugees in Kurdistan.

He also expressed  appreciation for the important role of the UAE Red Crescent and the UAE Consul General in the Region.

Kurdistan’s President reiterated that the  Region is “ready to provide all facilities for investment and Emirati capital owners in all sectors and fields.”

On the situation in the region, the two sides agreed that "partnership and cooperation among the regional countries are necessary to “protect security and stability, and to eliminate the dangers of terrorism and extremism."

The President of Kurdistan concluded on Saturday his official one-day visit to the United Arab Emirates.

“It was an honor to meet Sheikh Mohamed Bin Zayed today in Abu Dhabi, where we discussed further strengthening bilateral ties and cooperation, regional peace and other issues of mutual interest. I thanked UAE’s leadership for their continued support to the Kurdistan Region and Iraq. Barzani said on Twitter.

President Barzani pledges support to Yazidis in Iraq and the world

President Barzani on 61st anniversary of the September Revolution: unity is the only path

Kurdistan’s President on Eid al-Fitr: to end the hatred and start working to resolving the differences

Kurdistan’s President meets with Erdogan, stresses to strengthen the relations between Erbil and Ankara