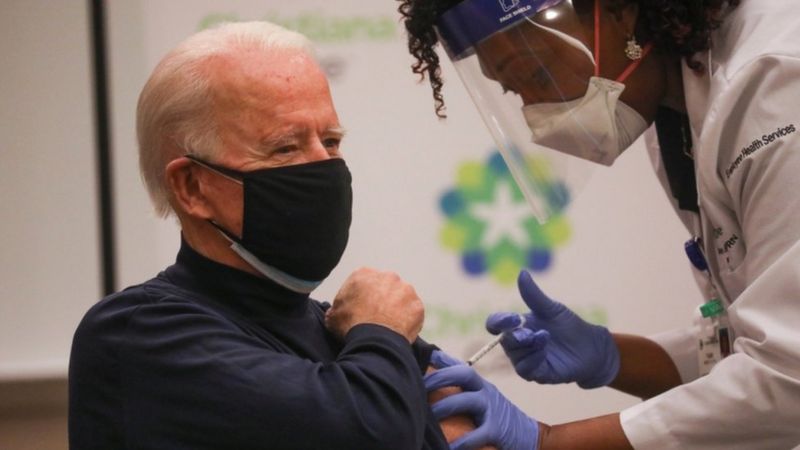 Shafaq News/ U.S. President-elect, Joe Biden, has received his first dose of the Pfizer-BioNTech Covid-19 vaccine, saying he was getting the jab to show Americans it is "safe to take".

Moderna launched on Sunday a huge roll-out after obtaining the approval of the relevant authorities.

More than 500,000 Americans are said to have now been vaccinated.

"I am doing this to demonstrate that people should be prepared when it is available to take the vaccine," Biden said from Newark, Delaware, where he got the shot live on T.V., "There is nothing to worry about."

He said the Trump administration "deserves some credit" for launching the country's vaccine program.

Biden's running mate, Vice-President-elect Kamala Harris, and her husband, Doug Emhoff, are expected to receive their first shots next week.

The Biden team has set a goal of 100 million Covid-19 vaccinations in the U.S. during the administration's first 100 days in the White House.

Donald Trump, who spent three days in hospital for COVID-19 in October, has not said when he intends to get the vaccine.

The U.S. president is now one of last of the country's top elected officials to have not received the first of the course of two jabs.

"I am not scheduled to take the vaccine, but look forward to doing so at the appropriate time," Trump wrote in a 13 December tweet.

Some of his advisers have defended the delay, saying he is still protected by the treatments he received to beat the virus.

Biden urges concern but not alarm in US as omicron rises