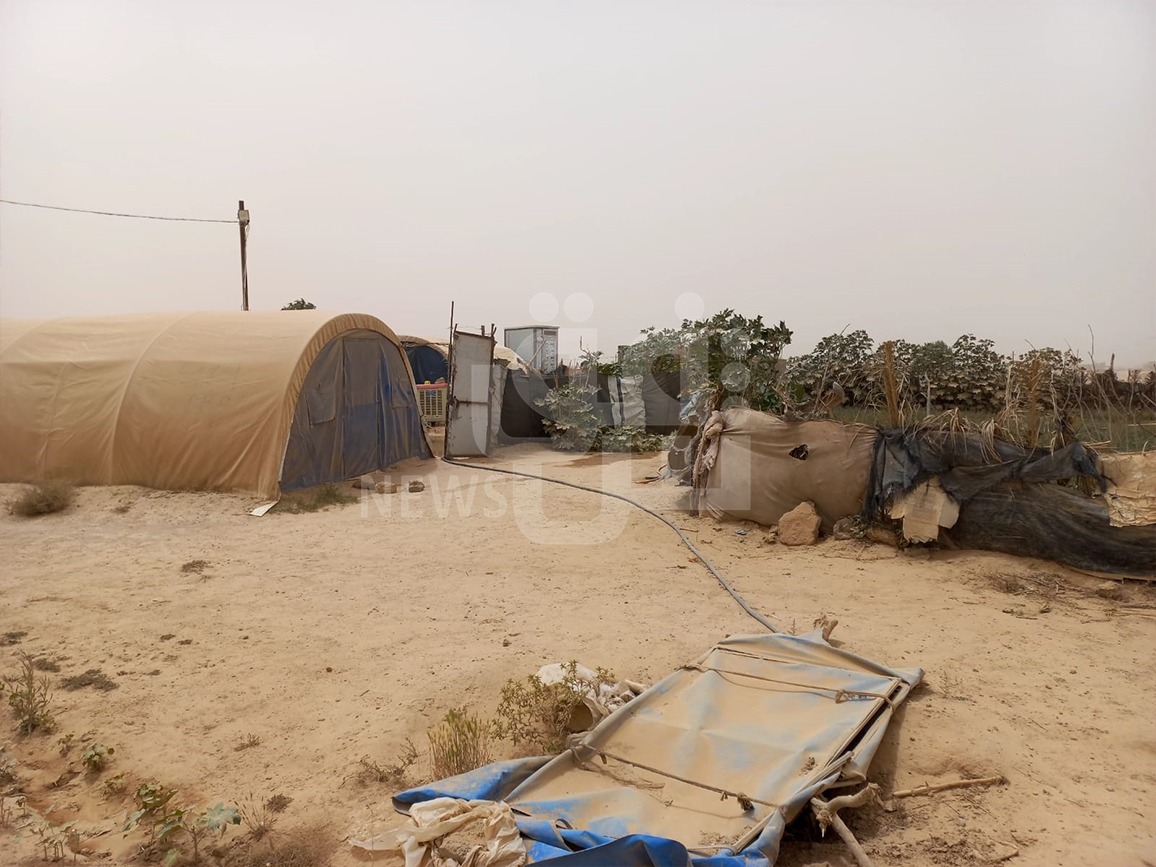 Shafaq News / Dust storms that swept through most Iraqi cities exacerbated the plight of displaced people in al-Anbar camps in western Iraq.

Over the past two months, Iraq has experienced nearly ten dust storms that have led to thousands of hospitalizations due to respiratory problems.

Displaced people in the al-Ameriya and Bezebiz camps in al-Anbar complained about the poor health services in conjunction with the recent dust storm.

"More than six years have passed since the liberation of Saqlawia from ISIS," said 39-year-old Mohammed Jassam, a displaced Saqlawiya resident in al-Ameriya camp.

He wondered, "What have governments been doing all those years? Is paving the streets more important than the lives of hundreds and thousands of women and children in the camps?"

"My son suffocated because of the dust storm that ravaged us and the lack of medical staff in the camp. So, I decided to take him to al-Ameriya hospital. However, the police officers almost refused to let us leave the camp because of measures they claimed were for security, even though security measures must be taken in the desert where ISIS militants are present, not in a camp that contains only women, children, and a bunch of men exhausted by hunger," he added.

"The situation in the camps is tragic. Those in their homes have suffocated, so how is it for the displaced living in ramshackle tents?" Khudhair Ahmed, an administrator at the Bezebiz camp, stated.

"In such cases, nothing can be done. What can a person do to a storm while living in a tent? It requires government work."

"There are health centers in the camp, but since their official work ends by 2 p.m., they cannot help the cases that arise by night, forcing displaced people to go to al-Ameriya at their own expense," Ahmed said.

He noted, "Transportation and traveling are completely allowed to the displaced, as there are no checkpoints to obstruct it."

"The local government has launched several initiatives. For example, the Ministry of Health dispatched a team to investigate suffocation cases. However, nothing tangible happened on the ground, as they simply inquired and left without providing any assistance", Ahmed continued.

"The government took action when it heard of a death case, but the truth is that the patient suffered from asphyxiation, and with supplemental oxygen, he started breathing normally."

Shaker al-Issawi, the administrator of the al-Ameriya district, indicated, "There are many cases of asphyxiation among the displaced, and health personnel and rapid response teams have been directed to treat cases and meet the needs of displaced people."

"Despite the very tragic situation of the displaced, no deaths have been reported in al-Ameriya and Bezebiz camps, and the situation so far is under control."

"According to the Iraqi Ministry of Immigration, over 400 families will be returned to their original areas of residence, specifically Karma, al-Fallujah, Saqlawia, and many to the western regions," al-Issawi said.

"The storms are a divine phenomenon, and no matter how much we provide to the displaced in the camps, we will not be able to reach a satisfactory result," said Mazin al-Rishawi, al-Anbar governor's advisor for displaced persons.

He added, "The local government in al-Anbar and the Health Department have issued a full alert to camps staff and health services in order to avoid asphyxiation caused by bad weather, and meet the needs of the displaced people, whether from al-Anbar or other governorates."

"The situation in the camps is under control," al-Rishawi said, adding that "the problem is that even those sitting at home have been greatly affected by the intensity of dust storms, and the displaced are undoubtedly living in a tragic situation."

"There is no central camp in al-Anbar, and the remaining camps are scattered throughout al-Ameriya district."

"The governor of Al-Anbar met with the governorate's security leaders to study the possibility of closing this file. Indeed, work has been done to check the families' criminal records and coordinate with the International Organization for Migration to support and return them," he continued.

"I think we will soon see many displaced families return to their original areas of residence, and financial support will also be provided to them."