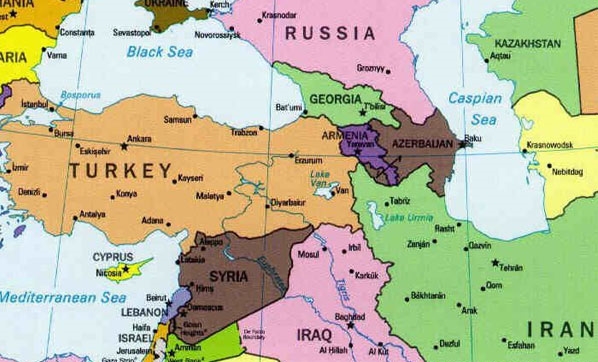 Shafaq News / Turkey launched Operation Claw-Lock, the latest of its military operations targeting the Kurdish Workers’ Party (PKK) in Iraqi Kurdistan, on April 17, 2022. The operation coincides with an Iraqi military push to establish control over Sinjar, a region in which PKK-aligned militias operate. Claw-Lock also comes amid renewed Turkish-Kurdistan Democratic Party (KDP) efforts to build a gas pipeline linking Iraqi Kurdistan to Turkey. All three events impact Iranian interests, something Iran and its Iraqi proxies have not failed to miss.

Claw-Lock is the fourth in a series of annual Turkish military operations that began in Spring 2019 and are aimed at reducing the capability of PKK militants to launch cross-border attacks into Turkey. The PKK maintains an embedded presence in the mountainous border regions between Iraqi Kurdistan and Turkey, near the Syrian border in Sinjar and on the Iranian border in the Qandil mountains, where the PKK headquarters is based. This latest operation focuses on the Zap region, the last area on the Turkish border, where the Turkish military claims the PKK can infiltrate Turkey. The operation is entitled Claw-Lock, as the stated goal is to conclusively lock the Turkish border from PKK access.

Claw-Lock came with the KDP's tacit consent. Turkey launched Claw-Lock only days after the prime minister of the Kurdistan region, Masrour Barzani, visited Istanbul to discuss enhancing security cooperation. The KDP remained silent regarding claims by Turkish president Recep Tayyip Erdogan that Erbil had supported the operation. But neither did the KDP condemn Claw-Lock; only the Peshmerga released a statement denying that its forces had cooperated with the Turkish military.

In a fashion typical of its past diplomatic reactions to previous Turkish military operations, the Federal Iraqi government condemned Claw-Lock and summoned the Turkish ambassador. While factions within Iraq's fragmented polity, such as the Sadrist bloc and Iranian-backed parties and militias, are vocal in their opposition to perceived Turkish violations of Iraqi sovereignty, the federal government has seemingly little intent to take Iraq's reaction beyond diplomatic wrist-slapping. The federal government also has limited capacity within the Iraqi Kurdistan region. While Turkey has built up at least forty military points within Iraqi Kurdistan over recent years, the Iraqi army cannot enter the region due to Iraq's federalized nature.

Despite Iraq's condemnation of Claw-Lock, the operation coincides with Iraqi efforts to reduce the influence of the Sinjar Resistance Units (YBS), a Yazidi militia affiliated with the PKK. Following the start of Claw-Lock, the Iraqi military sent reinforcements to Sinjar and briefly imposed Nineveh governor Najim al-Jabouri as acting mayor. On May 1, the Iraqi military launched an operation to dismantle YBS checkpoints in Sinjar, and fierce clashes between the YBS and the Iraqi army have ensued. Under pressure from Turkey, Iraq has sought to wrest control over the region since late 2020.

Sinjar, a historically Yazidi region, came under the influence of the PKK in 2014 after the Iraqi army and the Peshmerga retreated from the region amid an Islamic State (ISIS) offensive. In 2017, Iranian-backed militias embedded within the Popular Mobilization Units (PMU) entered Sinjar. Under the pretext of protecting the Yazidi population, Iranian and PKK-affiliated militias have established influence in the strategic border region. Both factions are connected. The YBS, while remaining under the influence of the PKK, joined the PMU in 2019. Over recent years, whenever Turkey launches air raids targeting the YBS in Sinjar, threats of retaliation by Iranian-backed militias Kata'ib Hezbollah (KH), Harakat Hezbollah al-Nujaba (HHN), and Asai'b Ahl al-Haq (AAH) increase. Such militias are also highly likely to be behind the near dozen rocket attacks targeting Turkey's Bashiqa military base in Nineveh over the past year.

Reacting to Claw-Lock, KH, AAH and prominent pro-Iranian politicians increased anti-Turkish rhetoric. Such rhetoric centers on the defense of Iraqi territorial integrity amid allegations of Turkish neo-Ottoman irredentist desires. Rhetoric was also backed up by action, with rockets again fired at the Bashiqa base on April 24. Following the latest attack on Bashiqa, reports stated that Turkish drones may have targeted a PMU base near Mosul on April 26.

Turkey's Claw-Lock is not just aimed at achieving border security but also at paving the way for increased Turkey-KDP energy cooperation. Amid the ongoing Russian invasion of Ukraine, alternatives to Russian gas have become increasingly vital to global energy security. In this context, a Turkish-KDP plan to export natural gas from Kurdistan to Turkey and Europe has been revived. In December 2021, the Kurdish oil company KAR group signed an agreement to expand a natural gas pipeline to Duhok within 35 km of the Turkish border for domestic production. In February, Turkish and Kurdish authorities made clear their intention to eventually extend this pipeline to Turkey. Following Russia’s invasion of Ukraine, Barzani stated that Kurdish gas would ultimately be exported to Europe. Eliminating the PKK from Iraqi Kurdistan has thus become even more crucial. The PKK would likely target the pipeline, just as the PKK attacks the Kirkuk-Ceyhan oil line that exports Iraqi oil to Turkey.

The gas pipeline would threaten Iran's energy interests. Turkey is a major buyer of Iranian gas, an important source of income for the internationally sanctioned Iranian economy. Diversification of Turkish gas imports would reduce Turkey's reliance on Iranian gas. Likewise, Turkish energy diversification would undermine Iran's ability to use gas exports to exert leverage over Turkey; Iran's use of energy supplies to Iraq has been a method of achieving settlements favorable to Tehran. Similarly, Iran is worried about the strength of the KDP and the overall stability of the Iraqi Kurdistan region. The KDP has become a partner in a tripartite alliance with the Sadrist and Sunni Sovereignty blocs. This alliance aims to exclude Iranian-backed political factions from the ongoing government negotiations.

Given the threat posed to Iranian interests, Iran's response is not surprising. The Islamic Revolutionary Guard Corps (IRGC) launched a missile attack, allegedly targeting a Mossad den in Erbil on March 16. Instead, the missiles struck a villa owned by the CEO of the KAR group. Iranian militia proxies also were likely behind rocket attacks targeting KAR energy infrastructure in Erbil on April 6 and May 2.

Turkey and Iran are heading toward a zero-sum game in Iraq. In Sinjar, Iran and its proxies could abandon their alliance with the YBS if it meant that its locations and interests in the region remain unaffected by Iraqi military operations. Regarding the gas pipeline project, Iran has set its red line early. If the project is pursued, Iran will seek to derail it through force or by fomenting political instability. Likewise, Erdogan has stated that Qandil will eventually be the next target of Turkish military operations. Qandil’s location means that Turkish military operations would likely result in instability in Iran, with PKK militants fleeing into Iranian territory. The total eradication of the PKK from Iraqi Kurdistan would help strengthen the KDP and Turkey and free up political, economic, and military resources to advance their interests in Iraq. Iran has enjoyed near unrivaled influence in the weak Iraqi state that followed the fall of Saddam Hussein. Iran will not give this up without a fight.