Eyewitnesses said that the shelling targeted a village in Dirluk district in Amadiyah district. 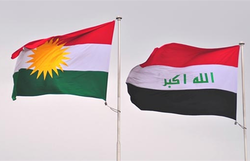