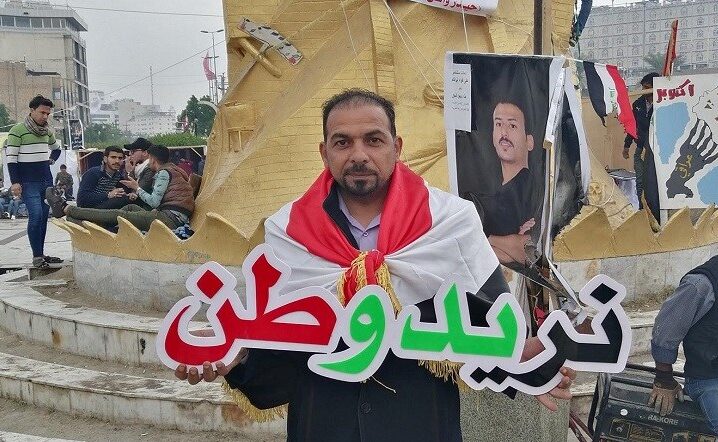 Shafaq News/ Only a few hours have elapsed since the assassination of the Responsible for the Coordination of the Civil Movement in Karbala Ihab Jawad Mohammed al-Wazni, but international reactions are already pouring in, strongly condemning the crime and demanding that the Iraqi authorities hold the perpetrators of the crimes accountable in the shortest delay possible.

Earlier today, two anonymous individuals riding a motorcycle gunned down al-Wazni in front of his home situated on the street of al-Haddad in the city center.

Internal protests arose after the assassination of al-Wazni. Hundreds of people took to the streets of Karbala early morning to protest against assassinations and the pursuit of activists in the "October Movement," which opposes the government in Iraq since the fall of Saddam Hussein's regime in 2003.

Regionally and internationally, the American embassy released a statement to Shafaq News Agency in which it said that the violent silencing of independent voices is unacceptable.

It added, "The US expresses its deepest sympathies to the family of the victim, and stands in solidarity with those who are seeking a bright, flourishing and peaceful future for Iraq".

The Canadian ambassador to Iraq, Ulric Shannon, tweeted, "Terrorizing civil society and destabilizing the safety of the candidates before the election is not permissible."

He added, "Canada is committed to helping the Iraqi people achieve their ambitions of a peaceful change through honest and transparent elections."

In turn, the British ambassador to Iraq, Stephen Hickey, condemned on Sunday the assassination of the Iraqi activist, Ihab al-Wazni, tweeting, "Impunity for the killing of activists since October 2019 has only led to more deaths; The need for concrete measures holding perpetrators accountable and protecting Iraqi citizens as they prepare for the elections in October is urgent".

Ihab al-Wazni, the Responsible for the Coordination of the protests in Karbala, is known in most of the circles that oppose corruption and mismanagement and call for the limitation of Iran's influence and armed groups around Iraq.

The HCHR had previously condemned the assassination of al-Wazni, insisting that the resurgence of assassinations is an indicator of the failure of the security institution to protect citizens.

Following this event, Prime Minister al-Kadhimi issued directives for the prompt investigation of the crime, adding, "the killers of al-Wazni are deeply involved in crime and those who think that they will escape from the grip of justice are deluded. We shall pursue the perpetrators of the crime and bring to justice anyone who attempts to destabilize public security."

This assassination is part of a long list of assassinations perpetrated against activists, journalists, and bloggers, including strategic specialist Hisham al-Hashemi.

In August of 2020, the Iraqi government announced the killing of 560 protesters and security officers in the demonstrations that swooped the country, including dozens of activists assassinated by anonymous perpetrators.

Explosive devices wound one civilian and security personnel in Karbala

Crowds of mourners are striking by Al-Hashd security

A high-level Military official in Karbala referred for investigation

Civil Defense rescues 200 people in a hotel in Karbala

An official statement about Karbala incident

Karbala gears up for the early elections