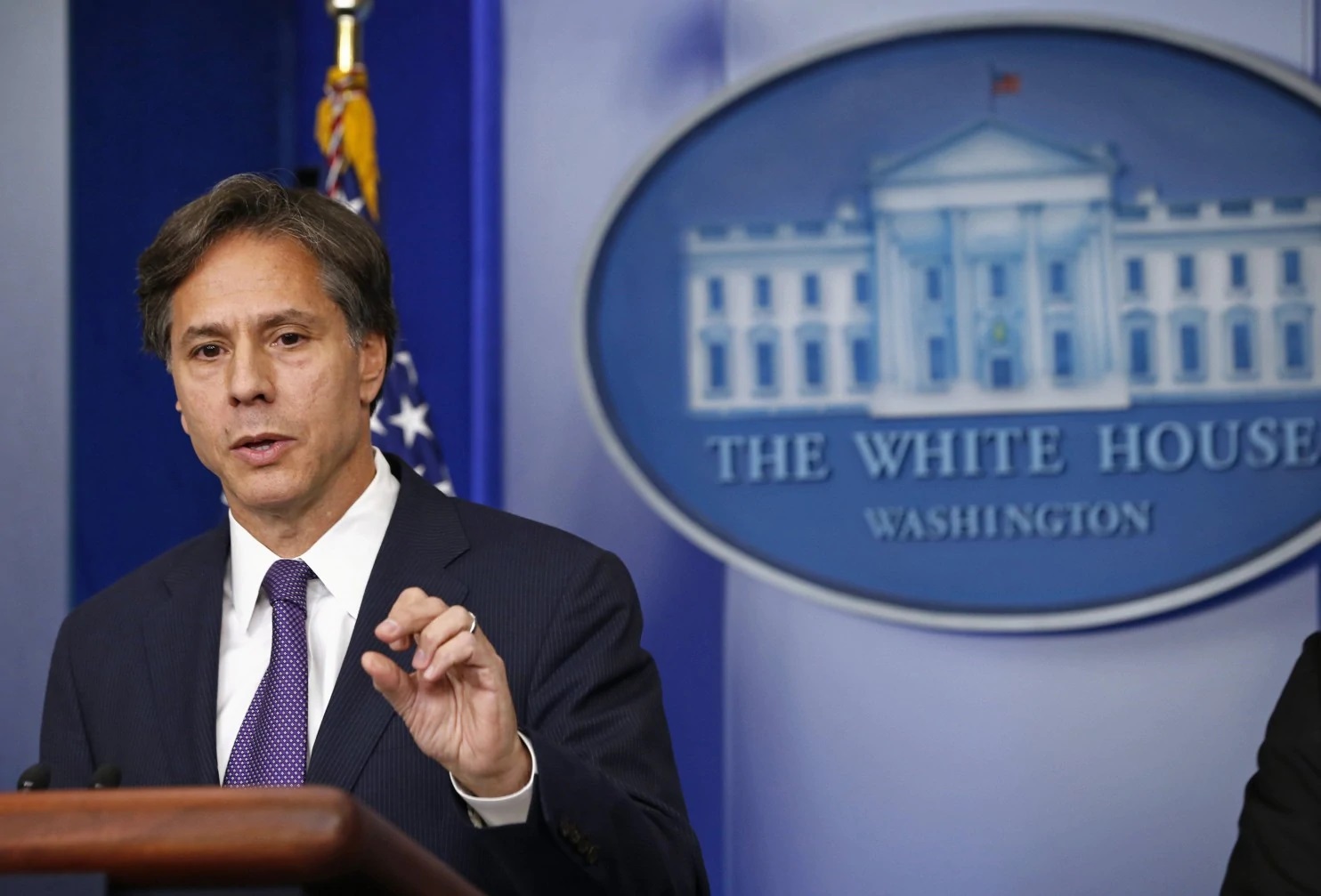 Shafaq News/ Secretary of State Antony Blinken said Sunday that he was "deeply disturbed by the violent crackdown" on Russian protesters and the arrests of thousands of people throughout the country demanding the release of jailed opposition leader Alexei Navalny.

Russia's Foreign Ministry claimed on Twitter that the U.S. was behind the protests, alleging a "gross intervention in Russia's affairs," but the demonstrations show that Russians are fed up with "corruption" and "autocracy," Blinken told NBC News in his first television interview since he took office last week.

Navalny was arrested Jan. 17 on his return to Moscow after having recovered in Germany from what U.S. and other Western governments say was a chemical attack by Vladimir Putin's government. Navalny's organization has sent letters to Blinken and the White House asking the U.S. to sanction Putin's financial backers to pressure Putin to release Navalny, who is scheduled to appear in court Monday.

Blinken said he is reviewing a response to Navalny's situation, along with other actions by the Russian government, including election interference in 2020, the Solar Winds hack and allegations that bounties were put on U.S. troops in Afghanistan. Former President Donald Trump did not press Putin about those issues. President Joe Biden did so last week in their first phone call.

Blinken would not commit to specific sanctions, but he said: "The president could not have been clearer in his conversation with President Putin."

Turning to China, Blinken said that even as World Health Organization inspectors are on the ground in Wuhan, Beijing is "falling far short of the mark" when it comes to allowing experts access to the sites where the coronavirus was discovered.

He called China's lack of transparency a "profound problem" that must be addressed.

As millions of people struggle in a U.S. economy hit hard by the pandemic, Blinken said the Biden administration would be looking to see whether the U.S. tariffs Trump imposed on Chinese imports were doing more harm to the U.S. than to their target.

He also criticized Chinese actions in Hong Kong, where he said China had acted "egregiously" to undermine its commitments to the semi-autonomous island. Under a sweeping national security law criminalizing secession and subversion, pro-democracy demonstrators have been swept up in waves of arrests.

Blinken said the U.S. must open its doors to those fleeing the crackdown, as Great Britain, which controlled Hong Kong until 1999, has said it will do.

"We see people who were, again, in Hong Kong standing up for their own rights, the rights that they thought were guaranteed to them," Blinken said. "If they're the victims of repression from Chinese authorities, we should do something to give them haven."

He said the U.S. will gain strength in confronting China by re-engaging in global affairs and with international institutions, "because when we pull back, China fills in."

"The challenge posed by China is as much about some of our own self-inflicted weaknesses as it is about China's emerging strength," Blinken said, a clear reference to Trump's aversion to groups like NATO, the U.N. and the World Health Organization.

Asked about how America's adversaries are using the attack on the U.S. Capitol as propaganda to undercut U.S. democracy, Blinken acknowledged that the Jan. 6 riot "creates an even greater challenge for us to be carrying the banner of democracy and freedom and human rights around the world, because, for sure, people in other countries are saying to us, 'Well, why don't you look at yourselves first?'"

But, he argued, because the U.S. is grappling with its problems in front of the entire world, it "sends a powerful message to countries that are trying to sweep everything under the rug."

Blinken said he believed American leadership in the world requires investing in the institution of the State Department and the diplomats who work there. Blinken said that means a diverse workforce that "looks like the country it represents."

He also promised to place more career Foreign Service officers in senior positions. While the number of career diplomats in high-level positions at the State Department sank to its lowest point under Trump, the numbers have been declining for decades.

In 1975, 60 percent of senior positions were filled by nonpartisan civil servants, compared to 30 percent in 2014, when Blinken was starting out as deputy secretary.

"I am determined to put our career folks in positions of responsibility and leadership," he said.

On Iran, Blinken warned that Tehran was months away from being able to produce enough fissile material for a nuclear weapon, saying it could be only "a matter of weeks" if Iran continues to lift restraints in the nuclear deal.

He said the U.S. is willing to return to compliance with the 2015 nuclear deal if Iran does and then work with U.S. allies and partners on a "longer and stronger" agreement encompassing other issues. Pressed about whether the release of detained Americans, which was not part of previous negotiations, would be an absolute condition for an expanded nuclear treaty, he did not commit.

"Irrespective of ... any deal, those Americans need to be released. Period," he said, adding, "We're going to focus on making sure that they come home one way or another."

Asked whether North Korea should be recognized as a nuclear power, Blinken said Biden had asked his national security team to review U.S. policy about Pyongyang "across the board" to determine the most effective ways to denuclearize the Korean Peninsula. The tools, he said, include the possibility of further sanctions in coordination with U.S. allies, as well as unspecified diplomatic incentives.

The Biden administration is also reviewing the U.S. relationship with Saudi Arabia to make sure it is consistent with U.S. interests and values, he said. He called the murder of Jamal Khashoggi in 2018 "an outrageous act against a journalist and a U.S. resident."

Blinken comes with deep roots in the State Department as the son, stepson and nephew of ambassadors. He was deputy secretary in the Obama administration, and his wife, Evan Ryan, now Biden's White House Cabinet secretary, served as assistant secretary of state for educational and cultural affairs under Obama. Blinken is the first secretary of state in decades to take on the job with a young family at home.

"Having two very young children is actually an incredible source of inspiration, because it really grounds what I'm trying to do," he said. "We are all here to try to make sure that life is better every single day for our fellow citizens. And especially that what we're doing is trying to leave a world that's just a little bit safer, a little bit more prosperous, a little healthier to our kids and grandkids."

Blinken: ‘Untenable’ for 10,000 ISIS fighters still to be held in Syria