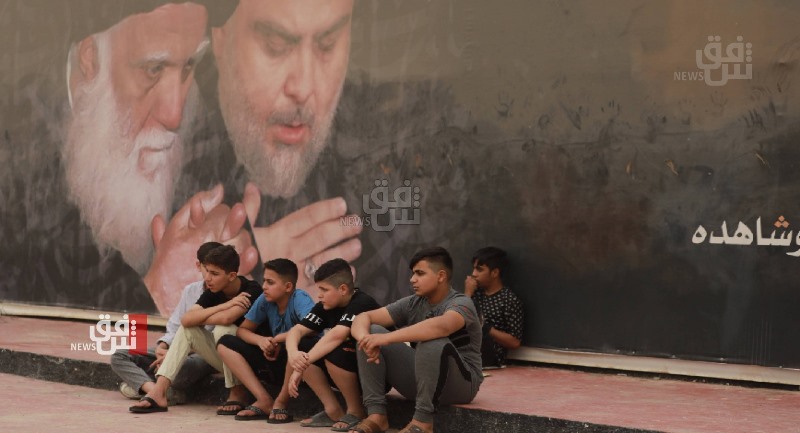 The new twist in the Iraqi arena added a clear "specificity" to the "infinite war" between al-Maliki and the prominent Shiite cleric Muqtada al-Sadr, igniting conflicts that now threaten to engulf the rest of the political, tribal, and security forces.

Both al-Maliki and al-Sadr are members of the "Shiite House". They have a religious background; al-Maliki leads the Dawa Party, Iraq's oldest Shiite party founded by Mohammad Baqir al-Sadr, while al-Sadr is the head of the Sadrist movement.

In addition to the tension caused by the October 2021 elections, al-Sadr has dominated the political scene, and then failed to achieve the parliamentary and political majority required to nominate the president of the republic and then the prime minister. In fact, his withdrawal from the political process and the growing personal-political strife between him and al-Maliki might result a serious political boom in the coming period.

As if there are no limits to this ongoing conflict in an atmosphere of political rivalry and mistrust between the two parties, the lack of a "neutral" force capable of resolving this dispute exacerbates the situation. There is actually no deterrent to prevent the looming bloodbath in the "Shiite street," possibly later in the Iraqi street if the situation worsens.

The embers of these fears loom on the horizon, with growing speculation that the Sadrists might take the streets, believing that the resignation of their parliamentary bloc, although ordered by Muqtada al-Sadr himself, has rendered their leader a "wounded lion," as his supporters have described him.

Iraqi political analyst Ahmed al-Sharifi stated that the audio leaks could lead to a clash between the supporters of each side because what al-Maliki said was very serious.

The audio leaks, which al-Maliki and his party have impeached, if true, exacerbates not only the dispute between him and al-Sadr, but also ignite the entire political scene in Iraq, because their sparks affect various forces, parties, the military, al-Hashd al-Shaabi (Popular Mobilization Forces-P.M.F.), and others.

Al-Maliki denied, in a series of tweets, the recordings attributed to him, "The circulating obscene words attributed to me abusing Muqtada al-Sadr are not true," adding, "I deny them all, and remain committed to maintaining good relations with the Sadrist brothers and the other partners in the political process."

Al-Maliki warned against "forgery, counterfeiting, and the use of modern technology to create false statements..."

However, the Supreme Judicial Council announced that al-Karkh Court of Inquiry had received a request from the public prosecutor to take legal action.

The Council stated today that al-Karkh Court of Inquiry "is currently investigating the issue."

"The dispute between al-Sadr and al-Maliki is not new, but these audio leaks have deepened the controversy further, especially since al-Sadr's response to them confirms their validity. This will not be limited to statements and tweets, as it may lead to political positions, whether from the Sadrist movement or other forces," al-Sharifi told Shafaq News agency.

He added, "The next escalation phase is very likely and may occur through media and political statements and positions. It may even reach the streets through protests or friction between supporters of different political forces, especially since the event is still in its early stages."

There is bloodshed between the two men. Many recall how, when al-Maliki was prime minister in 2008, he decided to launch the "Battle of Basra" military campaign against the Jaish al-Mahdi faction led by al-Sadr, to disarm it and reduce its influence, particularly in central and southern Iraq.

Muqtada al-Sadr does not appear to have forgiven al-Maliki for that, though, and he had a chance to retaliate politically when the Sadrists achieved a dominant bloc in the parliamentary elections in 2010.

At the time, al-Maliki was running for prime minister again and needed parliamentary votes. They denied him that, resulting in a complicated political scene requiring regional and international interventions from the U.S., Iran, Syria, and the Lebanese Hezbollah, to persuade al-Sadr to reach a political settlement, to which he reluctantly agreed.

However, the political game in Iraq fated the two men to clash again. Muqtada al-Sadr emerged victorious in the 2021 legislative elections, and then the forces of the Coordination Framework were formed, in which al-Maliki is a key player.

It soon became clear that the Framework did not want to give the Sadrists the right to put the new political game rules. Meanwhile, al-Sadr was moving in the opposite direction, allied with Kurdish leader Masoud Barzani and parliament speaker Mohammed al-Halboosi, in an attempt to break the rule of forming governments per the national consensus that has prevailed since 2003.

The Sadrist leader's approach has allowed his opponents in the Framework to question his intentions that he is seeking to weaken the Shiite role in the Iraqi government and to dispel the ranks of the Shiite house itself.

The audio recordings attributed to al-Maliki, which appeared to be leaked by Iraqi journalist based in the U.S., Ali Fadhil, who does not know their true source, may confirm these concerns and fears raised by some Shiite forces, including al-Maliki himself.

What was in the recordings?

The leaked recordings show a central attack on al-Sadr, describing him as "ignorant and understands nothing in politics", leading a British project to eliminate Shiites in Iraq, and pushing Iraq into infighting. However, Fadhil revealed that there are more recordings that condemn other party officials and leaders.

One of the recordings quoted al-Maliki as saying, "Iraq and Shi'ism will not be put in the hands of Muqtada al-Sadr, even if the security forces fail, I will not stand still," suggesting that he is ready to attack Najaf, al-Sadr's place of residence, if the latter tries to attack the people and the Supreme religious authority.

Moreover, al-Maliki describes al-Sadr as "a spiteful man who is a bloodthirsty coward, looking for money while he has looted the whole country, and seeking to take over everyone, as his followers tell him that he is Imam Mahdi."

"I hope the good-people nation will be ready; the issue transcends the media and necessitates psychological, practical, and armed preparation," he said, adding, "we must consider providing the forces with official cover. I cannot rely on al-Hashd al-Shaabi because they are a bunch of cowards."

"We must provide official cover for the tribal movement, because Iraq is on the verge of a devastating war from which no one will emerge unscathed unless we bring down the al-Sadr-al-Halboosi-Barzani project. If their project fails, Iraq will survive. Otherwise, Iraq will enter the danger zone."

Al-Maliki also said that he had told al-Kadhimi, "I do not recognize the authority of the army and the police, nor do I trust them. I will arm myself and fight with tanks, armored vehicles, and drones."

Al-Maliki also accuses Barzani of trying to strike Shiites by embracing Sunnis and taking advantage of the Shiite situation through Muqtada al-Sadr.

In the records, al-Maliki says, "I am familiar with them (the Sadrists). I striked them in Karbala, Basra, and Sadr City. They were cowards, and now they have become more cowardly because their hands are full of ill-gotten gains..."

The ramifications of these leaks are growing, amid a political process that has been significantly tense in recent months after the Sadrists resigned from parliament and the Coordination Framework gained greater parliamentary weight.

Basically, differences have recently resurfaced in how the Framework forces deal with al- Sadr's decision to quit politics, and while there have been reports that al-Maliki encouraged the option of ignoring the Sadrists' withdrawal, al-Fatah coalition leader Hadi al-Ameri supported playing by the rules, taking al-Sadr's concerns and interests into account, even if he is currently out of the political arena.

According to sources, Muqtada al-Sadr asked al-Ameri to engage in the premiership election race, and told him that the Sadrist movement would support his candidacy, a move that, if achieved, could split the ranks of the Framework, or, perhaps at best, could help get Iraq out of the ever-worsening political impasse.

CNN: What 24 hours of chaos in Iraq says about who controls the country